Parents take time out to be part of DCS visioning forum 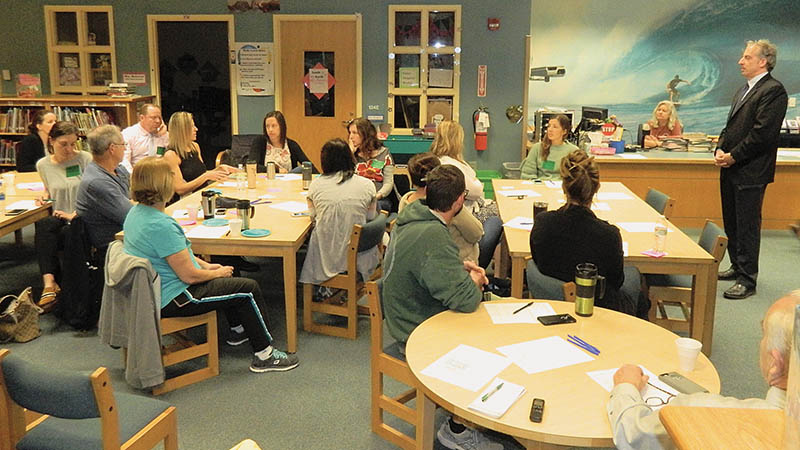 According to Farrelly, the Nags Head Elementary School session was the tenth of 20 similar public meetings in which, so far, close to 250 people have attended.

“The objective is to build a shared vision for Dare County Schools,” explained Farrelly.

During the morning session Farrelly, with the help from other school administration staff members, provided a brief look at several changes already underway along with others on the horizon all planned to improve the two-way flow of information.

When asked what his vision for the school system might be, Farrelly simply replied that he had not been here long enough to have one and that it was much more important to solicit the input of the parents involved in order to make it a community vision.

“We want to know what are your hopes and dreams for your children’s future,” he added.

Adding a voice of support, Arty Tillett said he has been with the school system in a number of different positions over the past 26 years. Tillett went on to assure everyone that the superintendent is very sincere when asking for feedback.

“A part of our plan is to find out what you want for our schools,” said Tillett.

While participating in a two-way discussion on several current and future changes, Farrelly introduced Keith Parker as director of digital communication and responsible for setting up the school system on Twitter, Instagram and other social media accounts.

Parker then provided a brief overview of technology changes that include a new school system website intended to be easier to use. He then walked parents through a web-based survey.

“You can’t have a public school without the public knowing what is going on,” cautioned Parker. “A lot of parents know what is going on in their child’s school but not the rest of the district. That’s a tragedy. In this school system there are amazing things going on and we want people to know about them. Not just the successes, but also feedback from parents.”

Farrelly said staff would be working through the results school by school looking for certain patterns and beliefs to address working conditions and safety in schools.

According to Farrelly, other improvements include a revamped alternative school learning programs that includes a partnership with College of The Albemarle for dual enrollment programs, hiring social workers and dealing with mental health issues.

“Mental health is not something a superintendent wants to stand in front of people and talk about,” continued Farrelly. “But, when you think about school safety and what’s going on in the country, not only 12 days ago, but certainly in the last couple of months, it is a major issue in schools in the United States.”

Farrelly said although Dare County has high performance schools with a lot of great things going, there are still kids here that struggle.

“We have a moral obligation and responsibility to tackle some of those issues,” he added. “We want to work toward a coalition of social workers, mental health support, pediatricians, health department officials and all kinds of other people around the table to look at how can we support kids and families in Dare County Schools.”

As the discussion gravitated back to safety, there were questions about what is and what can be done.

“As a superintendent I am always thinking about safety,” explained Farrelly. “Not just because of Florida. That can happen anywhere short of erecting 15 foot fences and bullet proof glass.”

Farrelly went on to say that it is difficult to get into schools, the buzzer system works well and Dare County is the first place he has been that every school has a school resource officer. He is also exploring other options.

When asked about metal detectors, one of the concerns there is the additional manpower and the cost. Other concerns include how much it extends the school day as well as the culture and atmosphere changes.

“We have to be careful about going down that road,” added Farrelly. “We need to go through a lot of steps and hoops before taking that step.”

There was also talk about the March 14 and April 20 nationwide walkout.

Tillett jumped in saying alternatives are being looked at with students.

“We are planning a proactive event with student leaders that will keep students in a safer environment than if they walk out,” said Tillett. “We don’t want our kids to walk out of our school from a safe environment into a place that would expose them to someone that would do them harm. Leaving school takes children outside of a safe environment.”

Farrelly added that it is a balance between freedom of expression and the safety of students.

Another proactive step has been establishing a team to monitor social media for key words that could serve as an alert to potential problems.

As the meeting drew to a close, one parent commented how sad it was that they were even having such a conversation.