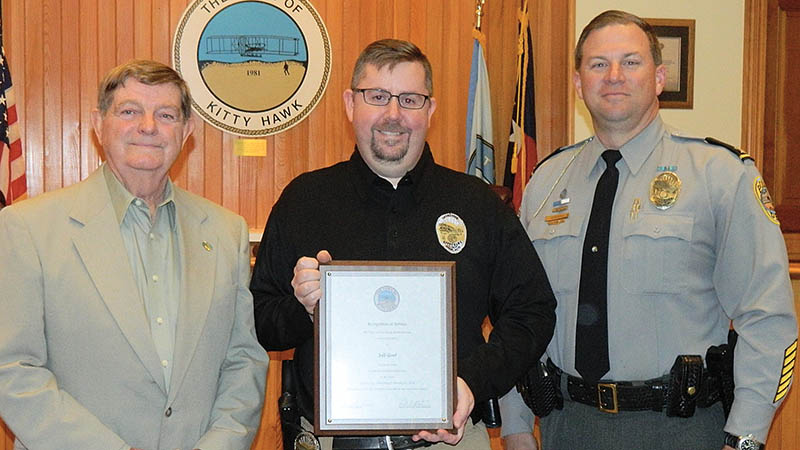 During a few introductory comments, police Chief Joel C. Johnson pointed out that unlike a number of other officers who have worked for several other agencies, Gard started with Kitty Hawk in February 1998 and has worked his entire career with the Town of Kitty Hawk.

“This is his first law enforcement job and he is the only officer I know of that served all 20 years within the department where they started,” said Johnson.

According to Johnson, Gard started as a police officer I and worked his way up through the ranks to his current position as detective in 2011, has more than 3,000 hours of training, volunteers with Mann Harbor Volunteer Fire Department and comes from a family with a long line of public service.

Following a plaque presentation, Gard said the Town of Kitty Hawk has been very good to him and that’s why he stayed so long.

The next agenda item was a slide presentation from Children at Play Museum executive director Robin Holton. 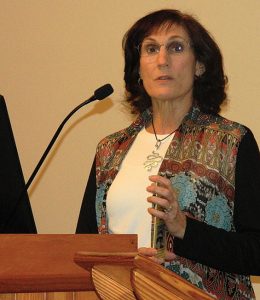 Holton explained that she is a native of North Carolina and a retired registered nurse with a master’s degree in family nursing who decided to do something fun during her retirement years.

“The museum is my first experience with a non-profit and it has been quite an experience,” she said.

Holton went on to say the museum was established in 2009 on the east side of US 158 and has become an important part of the local community. After being flooded by a hurricane, the museum moved to Buccaneer Walk location at 3810 North Croatan Highway in 2013.

According to the information Holton presented, the museum is a popular educational resource with some 15,100 visitors in 2017 and, so far this year, 150 pre-school classes have already come through the museum.

Holton added also that it takes $7,500 per month to operate the museum with revenues generated from admission fees, memberships, grants and donations.

In closing she invited council – and others – to consider taking a tour of the museum, adding that the museum always welcomes new volunteers and financial contributions.

In regular business for the evening, a series of three unrelated public hearings saw council approve two proposals and send one back to the Planning Board for additional work.

The first hearing for the evening involved a request that would allow the reconfiguration of six existing lots between Lindbergh Avenue and North Croatan Highway just south of Eckner Street. Currently, each lot is roughly 100 feet by 150 feet deep with three fronting Lindbergh and three fronting North Croatan. The change, as approved, allows six 50×299 lots with a five foot town easement that prohibits access to the bypass. A variance was needed since lot sizes will be a little less than the minimum 15,000 square foot standard. Although the lots will also be less than the town’s 75 foot width minimum, there are other 50-foot lots on Lindbergh.

The next council approval granted was for a code change to allow multifamily dwellings as a conditional use in the town’s beach commercial district.

During discussion on the issue John M. DeLucia with Albemarle and Associates commented that the project that initiated the change may not take place due to some existing restrictive covenant. He went on to say that even so the change is not site specific and there is a need for multifamily housing.

“It might not work on the planned site,” said DeLucia, “but we still need the ordinance to allow them.”

DeLucia then added that while covenants can be changed, the structure cannot be built without approving the proposed text amendment.

“We do need affordable housing here,” offered councilman Ervin Bateman, who then offered a motion to approve, which passed on a unanimous 5-0 vote.

It wasn’t as smooth for what had been considered a minor adjustment to existing setback requirements.

Currently swimming pools and HVAC units are allowed to encroach within five feet of a property line, but pool equipment cannot. According to planning director Rob Testerman, there have been several cases of contractors using existing HVAC stands to install pool equipment.

“In these cases there is no additional structure and no increased encroachment,” said Testerman. “It creates a zoning violation and the owner is required to construct an additional stand.”

The proposed change would add uncovered pool equipment on an uncovered stand to the setback exemption HVAC units have.

Although council appeared in favor of the concept, there were split opinions on allowing a cover for the equipment or leaving it uncovered. Unable to reach a clear consensus, a motion to send it back to the Planning Board squeaked by on a 3-2 vote.

In other business for the evening a five-item consent agenda was approved that included February 5 council meeting minutes, a budget transfer of $392,682 from the beach nourishment capital reserve fund to the beach nourishment capital project fund, a $1,000 annual membership fee to the Dare County Government Education Access Channels, a resolution urging the NC Legislature to limit the entities that can operate behavioral health and substance use service plans with a request that the North Carolina General Assembly allow the Local Management Entities/Managed Care Organizations model for managing mental health problems, developmental disabilities and substance use disorders to continue rather than considering privatized, for-profit enterprises which could prove to be detrimental to this vulnerable populations and a  $30,520 contract with Barnhill Contracting Co. for resurfacing portions of Hallett and Goosander Streets and the intersection of Maynard Street and Lindbergh Avenue.

During the evening’s public comment sessions, town council was provided with a new edition of the Dare County League of Women Voters Community Guide. This year, 7,100 copies were printed in English with additional copies in Spanish through a pilot program.

Also speaking was Robert Spencer Oliver who used his eight minutes at the podium with a request that it reconsider a February decision in which two town-owned lots on Putter Lane next to his property were rezoned from residential to emergency-medical. Repeating some of the same arguments he made at the February meeting, Oliver said again that he did not believe the change was necessary.

“Transparency of all council and staff actions has been at the forefront of how we have attempted to conduct government business in Kitty Hawk,” said Perry. “My instruction to staff was to proceed, under statue for notice and public hearings, as appropriate for all conditions to be considered.”

He said also that because governmental use was the original purpose for purchase of the town-owned property, rezoning should have occurred more than a decade ago and that the property now correctly zoned will not be returned to residential.

Also speaking to council was Kitty Hawk resident Brian Morgan, who thanked town staff for the assistance provided in getting the necessary paperwork for a shed on his property.

The next Kitty Hawk Town Council meeting will be a week later than normal on Monday, April 9 at 6 p.m. to avoid the April 1 Easter weekend.