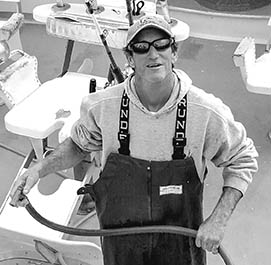 A Manteo High School graduate, Jason fished all his life learning his skills at the age of 14 from Capt. Allen Foreman and Capt. Omie Tillett. Awarded Mate of the Year at Oregon Inlet Fishing Center, he won many tourn-aments on the charter boats he served. He was a true waterman and continued to fish until only a few months before going home to God. He had a love for life, his friends and most of all fishing.

A memorial service will be held at 1:00 pm on Thursday, April 5, 2018, at St. Andrews by the Sea Episcopal Church with Rev. Phillip R. Glick and Pastor Stephen Wescott officiating. A reception will follow in the church parish hall. The family will receive friends and relatives Wed-nesday evening from 5:00 until 7:00 pm at Twiford Colony Chapel, Manteo.

Twiford Funeral Home, Manteo is assisting the family with arrangements. Condolences may be ex-pressed at www.Twiford FH.com.