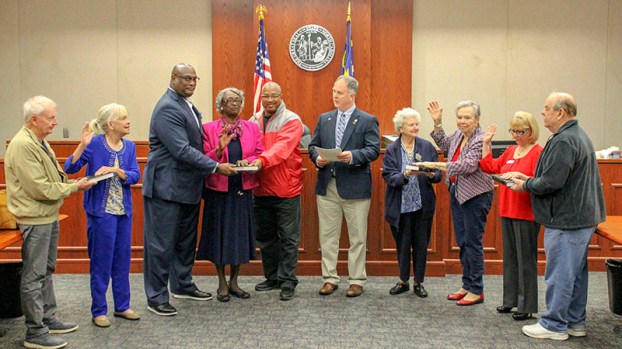 NEWLY APPOINTED members of the Dare County Board of Elections take the oath of office from Dare Clerk of Court Dean Tolson (middle). From left, with board member Sandra Semans Ross is Dale Draper; with Virginia Tillett are her sons Johnnie Tillett and Michael Tillett; with Donna Elms is former Board member Lynda Midgett; and with Carole Warnecki is her spouse Frank Warnecki. (Dare County photo)

Dare County’s new Board of Elections was sworn in Monday, April 2, in a ceremony in the county’s Justice Center.

Holding Bibles for board members were Dale Draper for Sandra Semans Ross; for Virginia Tillett, her sons, Johnnie Tillett and Michael Tillett; for Donna Elms, former Board of Elections member Lynda Midgett and for Carole Warnecki, spouse Frank Warnecki.

After the ceremony, an organizing meeting was held.

Tillett is the first woman of color to serve on the Dare Board of Elections. She previously served on the Dare County Board of Commissioners and Board of Education. She is retired from the College of The Albemarle. Elms and Warnecki are returning board members. Ross is the former editor of the Outer Banks Sentinel.