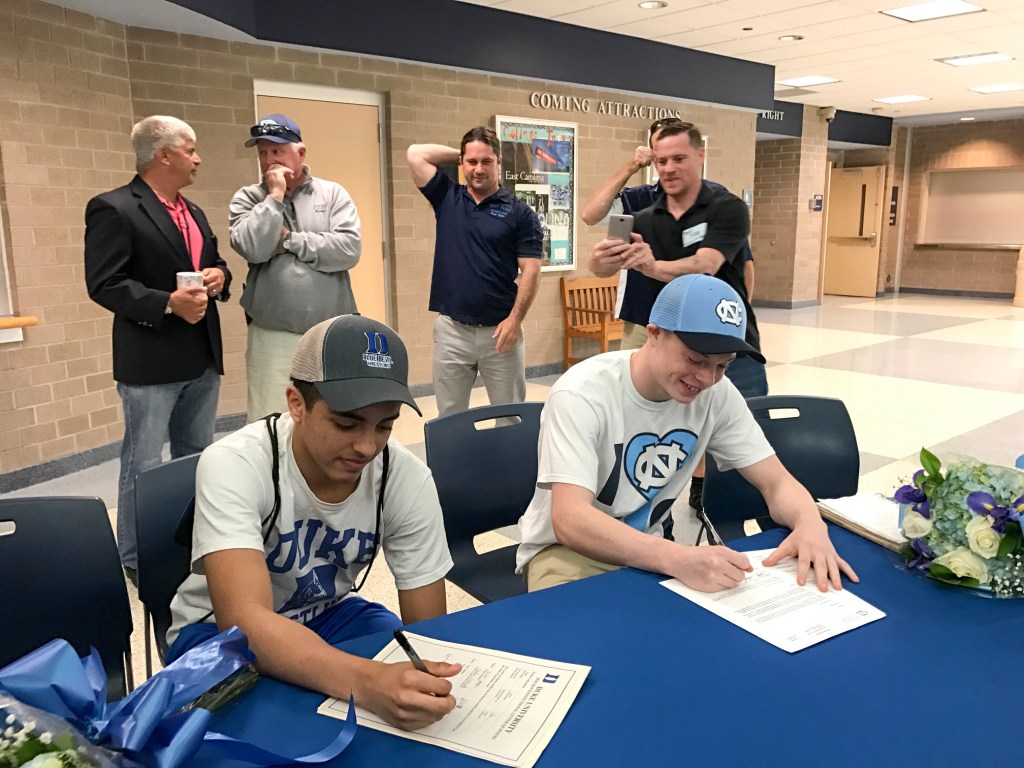 Arien Leigh, left, and Jeremiah Derby sign to Duke and Carolina respectively at First Flight High School. The two have been friends since preschool.

Jeremiah Derby and Arien Leigh have been friends since before they even knew how to say the word.

The First Flight High School seniors went to daycare together as toddlers and became fast friends. In their middle school years, they met again – on a wrestling mat.

The duo drifted apart when Jeremiah moved to Currituck for middle school. That’s when Arien started wrestling, a sport Jeremiah had been involved in since he was 4 years old.

One day, they faced off at a wrestling tournament, where Jeremiah pinned his childhood friend “in 14 seconds flat,” Arein said.

“It was the quickest pin of the tournament,” he laughed.

As they leave First Flight High School, the friends are going their separate ways again — Jeremiah to University of North Carolina at Chapel Hill and Arien to Duke University, both recruited into their school’s wrestling programs. Both are state wrestling champions, Jeremiah winning his second state title this year and Arien a runner up. And they fully expect to meet again on the mat.

There was no rivalry at recent a dual signing ceremony at First Flight, where blue was the color of the day.

Keisha MacLeod, Arien’s mom, carrying a blue-hued bouquet, said her 17-year-old “has always been an over achiever.”

He’s been tops in academics throughout his public-school years and has always been driven “at anything he wanted to do,” MacLeod said.

Jeremiah’s dad, David Derby, said sports provide a way to channel “these tough island kids’” energy, in turn keeping them out of trouble, something he didn’t have himself as a child.

And he’s carrying on a family tradition. Jeremiah’s mom, attended Carolina, as does his sister.