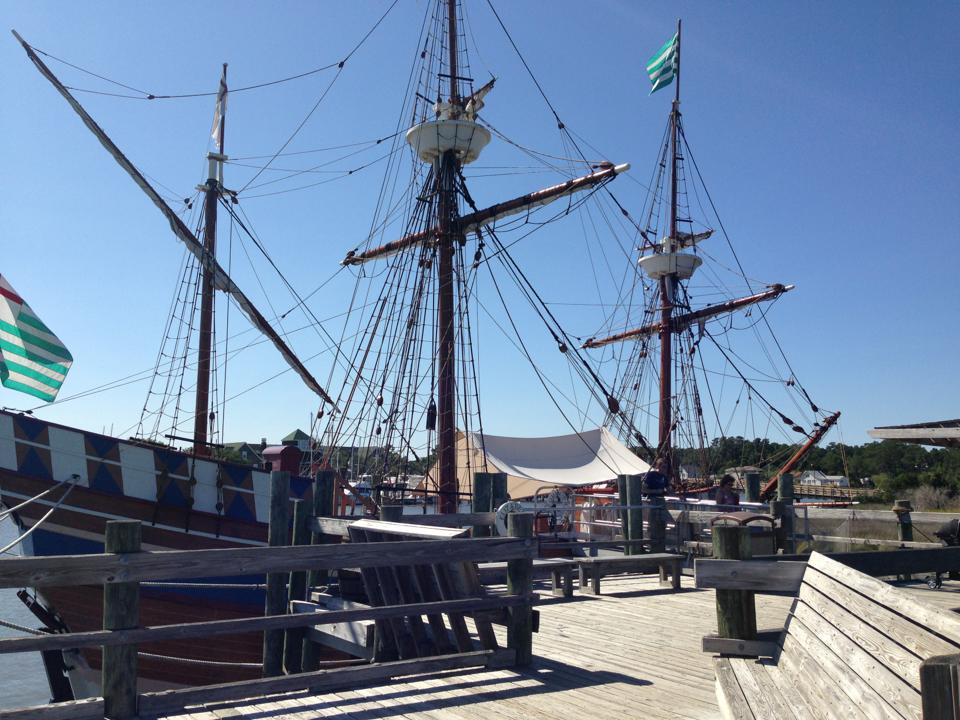 In requesting funding for dredging the Manteo channel, county and town leaders say the Roanoke Island Festival Park’s replica ship, the Elizabeth II, could be at risk if unable to sail. Photo by Kari Pugh

The Town of Manteo, Dare County Board of Commissioners, Dare County Waterway Commission and Friends of the Elizabeth II have launched an effort to gain state funding for dredging the main boat channel into Shallowbag Bay.

In a letter to Gov. Roy Cooper, Manteo Mayor Bobby Owens writes that keeping the channel to Manteo open is vital to the economic well-being of the town. He also wrote that the Elizabeth II, the representative 16th century sailing ship docked in Manteo, could be at risk if she can’t be sailed.

The Elizabeth ll was built with state funding and launched in 1983 as part of the 400th celebration of the first attempt by the English to settle in the new world. The representative sailing ship has become the centerpiece at the state-owned Roanoke Island Festival Park and an anchor for the Manteo waterfront revitalization.

The fear is that worsening shoaling would leave the ship unable to navigate into Roanoke Sound to fulfill the mission of bringing living history to other waterfront towns and undergo periodic maintenance. A spokesperson for the NC Department of Cultural Resources, the agency that oversees the historic ship, said the agency is “very supportive” of the emergency dredging request.

Mayor Owens in his letter to the governor wrote: “Without emergency dredging of a short section of the federally mandated-but-state supported Manteo channel, two interests vital to the town will be irreversibly impacted: recreational boaters traveling the Intercoastal Waterway, and the historic wooden vessel that must move, or she will deteriorate.”

Of equal importance for the town is the potential loss of revenue if larger boats are unable to navigate the Manteo channel to the town docks. Town officials believe an active and vibrant waterfront is vital to keep tourists coming. The protected harbor can accommodate vessels up to 150 feet in length. Manteo’s dockmaster Carl Jordan worries that word of shoaling will scare boaters away.

A recent survey of the Manteo channel revealed several problem areas. The channel was last dredged in 2005. The town says that some areas of the 12-foot deep navigation channel have only four feet of water. The Dare County Board of Commissioners passed a resolution on Monday in support of the Town of Manteo request for emergency dredging.

Before dredging could begin the project would need permits from a multitude of federal and state agencies, designate a dredge spoil area, address environmental concerns and most importantly, find funding. A Manteo spokesperson said as a next step a meeting between state and local officials could be in the works.