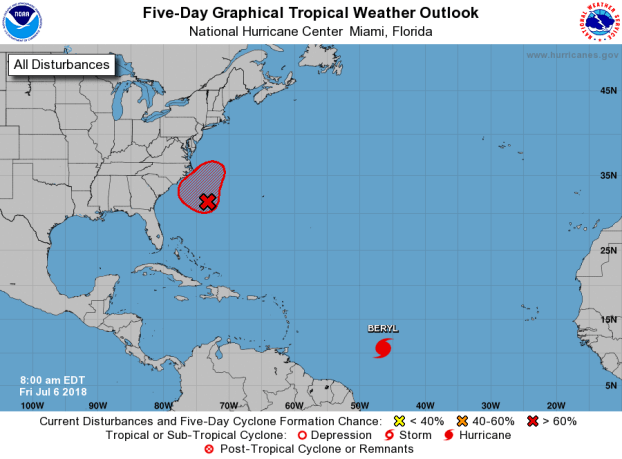 A tropical disturbance off  Cape Hatteras became a tropical depression late Friday and is expected to reach tropical storm strength Saturday, according to the National Weather Service.

An Air Force reconnaissance plane is scheduled to investigate the cyclone Saturday.

Swells generated by the depression are expected to increase and affect portions of the coasts of North Carolina and the mid-Atlantic states this weekend.

“These swells could cause life-threatening surf and rip current conditions,” the weather service said in a statement issued late Friday night.

Because steering currents are “very weak,” the system is likely to stall out or meander somewhere off the North Carolina coast, turning out to “well out” to sea by Sunday, according to NWS. Showers and thunderstorms are likely through the day Saturday.

The National Weather Service predicts that the Outer Banks will experience 20 to 30 miles per hour northeast winds with gusts near gale force at 35 miles per hour. A small craft advisory has been issued for 1 p.m. Saturday to 8 a.m. Sunday. The weather service says inexperienced mariners, especially those operating smaller vessels, should avoid navigating in this weekend’s conditions.

In the eastern Caribbean, the first hurricane of the 2018 Atlantic season, Beryl,  is expected to pass near Dominica and the French Caribbean islands of Guadeloupe and Martinique late Sunday or Monday.

Beryl is forecast to remain a hurricane as it passes south of Puerto Rico and not dissipate until it is located south of Haiti and the Dominican Republic.

Stay with thecoastlandtimes.com for updates.

Chicamacomico readies for centennial    By Mary Helen Goodloe-Murphy  mhgm@thecoastlandtimes.com   Since 2014, Chicamacomico Historical Association’s Board of Directors has been preparing for this year’s centennial commemoration of the Mirlo rescue. ... read more