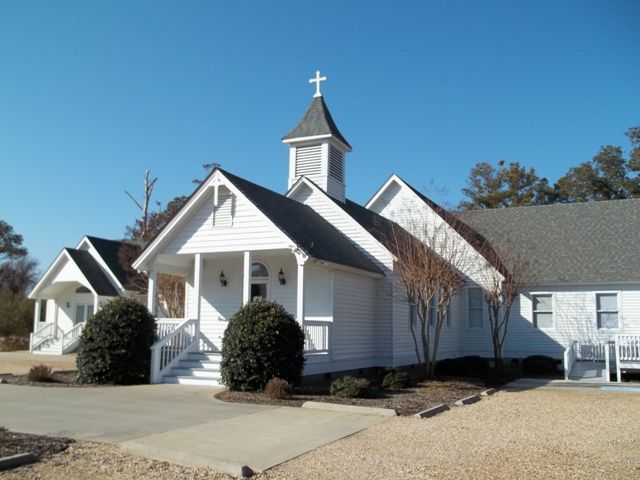 The Corolla Chapel, tucked behind the Corolla lighthouse, was built in 1885 and is still used for church services today. Contributed photo

Did you know there was once greyhound then NASCAR racing at the same track in Moyock?

Did you know that the Corolla Chapel, that was built in 1885, is still in use?

Can you name the North Carolina governor who was born in (hint) JARVISburg?

Visitors to the library will be greeted by a 350-year county timeline attached to the ends of the first group of shelves upon entering the building. Not only does it let everyone know right away that something special is going on, it gives folks reason to pause and discover something new about a county considered to be part of the area that was the birthplace of North Carolina.

The timeline was the project of county librarian Laura Salmons and staffers Dorothy Hocutt and Janeth Murphy.

When people stop to read some of the information on the timeline, Hocutt said she often hears them say, ¨I didn´t know that.¨ Like when one person learned that Currituck once extended all the way to Hatteras Banks (and in other directions beyond its current borders).
As one of the fastest growing counties in the state for the past few years now, Hocutt said that many of the visitors to the library are new to Currituck and don´t know its history – a history that is pretty interesting, and it’s a great time to learn about it.

The information in the timeline gives snapshots of some of that interesting history, points in time, events, that shaped and reshaped Currituck County. Like in 1713 when the ¨new¨ inlet from the Atlantic opened into Currituck Sound, and in 1828 when it closed. As portions of the county went to Carteret, Tyrrell, Hyde and Dare counties and the boundary was established between North Carolina and Virginia, and between Currituck and Camden.

Travel through the years to 1928 when construction begins on NC 168, to 1942 when the Army built a flight strip in Maple that would become the Currituck Regional Airport, to 1962 when modern ferry service to Knotts Island began, to 1992 when the county bought the Whalehead Club,  and of course, to opening of the county library in Barco in 1975 and opening of the Moyock library in 2009 (the first bookmobile was a Model A purchased for the county by J.P. Knapp back in 1931, just prior to the Moyock Women’s Club starting a lending library in 1933.)

There are also photographs along with the timeline, like some pictures of those early bookmobiles, of J.P. Knapp, the Moyock train station, the Old Jail (that is still the Old Jail), an older and newer courthouse (in the same location as today), a news account from 1860 about a slave insurrection and the arrest of 21 slaves who were later acquitted, some old maps, and a copy of that 1663 Carolina Charter that set in motion the beginnings of Currituck County.

But, don´t stop there. Six large and colorful panels have been set up at spots throughout the library, telling more of the story of “North Carolinas’ birthplace,” the 350 years of the Albemarle (that is today Currituck, Chowan, Pasquotank and Perquimans counties), the role of the Native Americans, the Pirates, early settlements.

Hocutt pointed out that the Barco library has one of the largest genealogical sections in northeastern North Carolina. So, as curiosities get piqued by the timeline and panels, library patrons can burrow in for more, thumbing through books and documents, photos and records. There really is something for everyone to discover, no matter how much or how little is already known about their county.