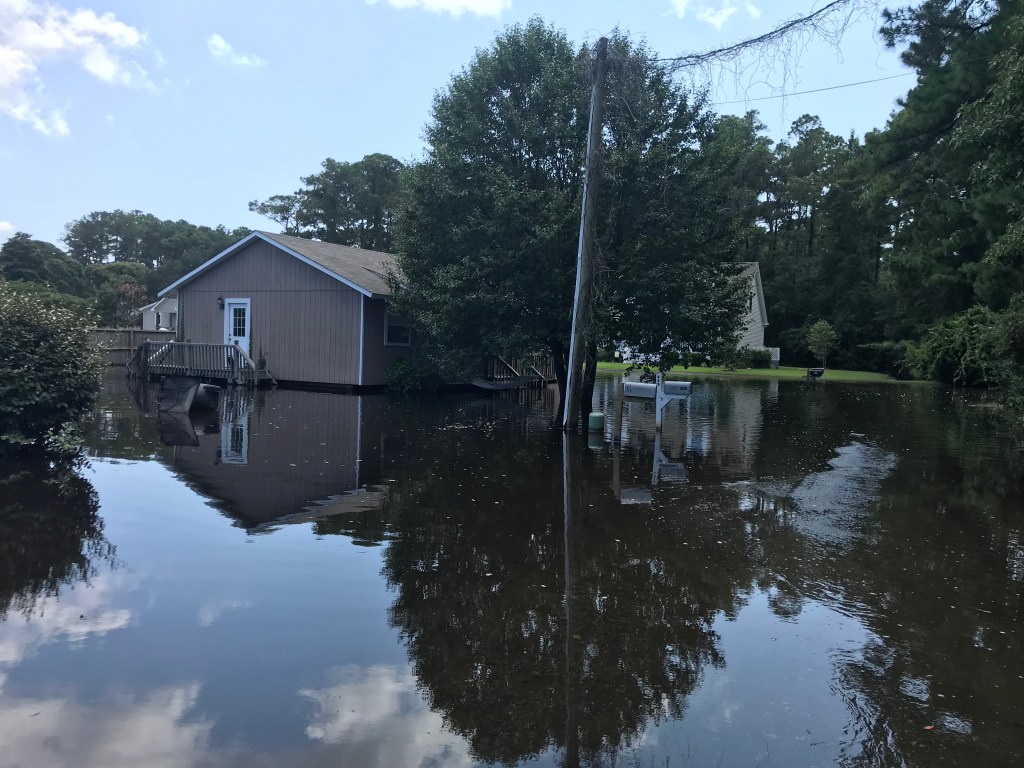 Flooding in the Holly Ridge subdivision. By Kari Pugh

In a swath of northern Roanoke Island, out near the Dare County Regional Airport, yards and septic systems remain flooded from heavy rain that fell over 11 days in late July.

The area has flooded two times in the last few years with the same result. The first time was Hurricane Matthew.

Thirteen people from northern Roanoke Island spoke to the Dare County Board of Commissioners Monday, Aug. 6. Two more signed up but had to leave. They all had a similar story to tell.

Ditches and pipes are blocked. A pipe is collapsed. A dry pond overflows.

Tom Higgins from the Brakewood subdivision called the dry pond “a disgrace.” It was his second time before the board on the flooding issue. For the last 10 days, Higgins has had to put on rain boots to walk around his property.

Many residents have taken matters into their own hands, setting up makeshift pumps to send the water toward the sound. It’s not helped much.

J.B. Head from Bradford Lane has been pumping for over a week. His house is still uninhabitable.

Madeleine VanMiddlesworth lives behind Head on Langley Lane. She must slog through “three feet of sewage infested water” to leave her home. She’s been without the home’s septic system for three and a half weeks. When the water finally recedes, she says it will be another month before the septic system is usable.

“This water is not going away,” said Carolee Tillett from Holly Ridge Road. Her spouse, Mike Tillett, said the situation poses a serious health problem.

Pat Draisey from Daphne Lane was the lead-off speaker. She reported that eight lots on her street were flooded. She too pointed to the health hazard.

Jim Hoffner from Daphne Lane has a damaged septic system and non-functioning air conditioner. He went to Virginia to get a high-pressure pump. He turns it off about 9 p.m. at night, and the water comes back.

VanMiddlesworth made dozens of calls and was told the situation was “not our problem.” Agencies had no money and no solution. She called the health and water departments but was told those departments could do nothing. Mosquito control came by and applied pellets.

“There has to be an answer. We’re not going to go away,” said Hoffner.

“Saying there is nothing we can do is unacceptable,” commented Draisey.

Former Dare commissioner Margarette Umphlett has a house on Holly Ridge that has two and half feet of water under the house. “I know there have to be solutions.”

County commissioners reacted swiftly to the residents’ complaints, at least for the short term.

“You’re exactly right. This is unacceptable,” said Robert L. Woodard, board chairman. “I’m prepared to do whatever it takes …to get this damn thing taken care of now.”

Commissioners declared unanimous support for getting the “nasty water out of there.”

At the opening of the commissioners’ Aug. 6 meeting, county manager Robert L. Outten reported on actions tried, which he described as “like squeezing a balloon.”

Pumping on Daphne Lane was going the wrong way. The dry pond filled and then overflowed. Pumping on Holly Ridge was tried multiple times. The water was flowing in a circle.

“We don’t know where to put the water,” said Outten.

The county doesn’t have pumps large enough to send water to the airport culvert.

“We’re struggling to do something,” said Outten. The options are “got to move it or haul it.”

“Haul it” is the immediate solution.

By the end of the meeting, Outten reported that vacuum trucks were on their way to Dare County from Virginia. Pumping started around 6 p.m. Monday evening.

The trucks are discharging into the existing drainage system at the Dare County Regional Airport. As a result, the Old Swimming Hole is posted with signs saying no swimming or recreational use.

The state’s forestry service was expected to arrive Tuesday and will assess the possibility of pumping water from Holly Ridge to ditches along U.S. 64/264.

He reported North Carolina Department of Transportation has commissioned a third party to do a drainage study and present three or four options about what’s needed and costs.

Moran cautioned that the study will not be finished overnight; that implementation will take time; and that no system can handle the amount of rain delivered over 10 days.

At the end of the meeting, Ann Daisey, staffer for Dare’s Soil and Water Conservation District, suggested a storm water steering committee and other possibilities.