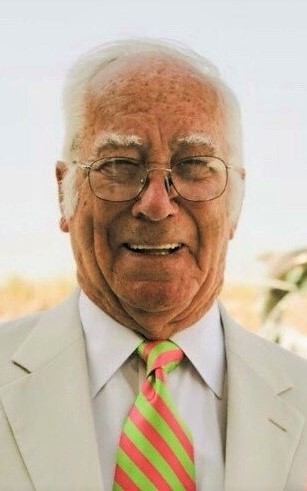 James Samuel Roebuck, age 94, of 1816 Rivershore Road, Elizabeth City, died on Aug. 22, 2018, at Chesapeake Regional Medical Center after a brief illness. A native of Robersonville, North Carolina, he was born on December 30, 1923, to the late Ethel and Connor Roebuck, one of six siblings.

A member of The Greatest Generation, Sam proudly served his country in the United States Army in World War II from 1943 until 1945, during which time he was captured in France and spent the final days as a prisoner of war in Germany. He was honorably discharged in 1945.

In the early 1950s, Sam opened the S & R Open Air Produce Market on Hughes Boulevard in Elizabeth City, the beginning of a 40-year grocery business of which he was owner and president. Over time, the S & R Supermarkets and Convenience Stores expanded to include locations in Elizabeth City, Hertford, Edenton and the Outer Banks.

His life exemplified the American Dream. He completed education through only the 8th grade, always humbly attributing his business success to “luck and hard work.” He wanted all individuals to have access to higher education, and established numerous need-based scholarships at the University of North Carolina at Chapel Hill, College of the Albemarle, and Elizabeth City State University. He served as a board member of the North Carolina Board of Community Colleges, Elizabeth City State University, and College of the Albemarle.

Sam was an avid golfer, card player, fisherman, and hunter, and enjoyed wildlife and bird watching in his later years. Most of all, he loved time spent at his beach house in Kill Devil Hills. He was known to spend many hours of his retirement with a paintbrush in hand, helping others in need. At age 73, he painted the entire exterior and interior of his church home, First United Methodist Church, and countless Bertie County houses damaged by hurricanes and flooding.

His gentle soul, generous heart, wit, and wisdom will live on in the hearts, memories, and lives of his family members, and his legacy forever cherished by all who were touched by him.

Sam is survived by his wife of 37 years, Carole Symons Roebuck of Elizabeth City; his daughter, Kathryn Roebuck Holding, husband, William Holding, and granddaughters, Grace and Elizabeth of Raleigh; and son, David Light Ray, wife Nickie Ray, and granddaughter, Mollie of Wilmington. He is also survived by his sister-in-law, Kay Symons Patterson, her daughter, Melissa Morrisette Tillman, and family of Raleigh; his nephew, Levi Roebuck of Bear Grass; and many other nieces, nephews and cousins.

The family would like to thank Janice Dance for her loving care and friendship.

A gathering of family and friends will take place on Sunday, Aug. 26 from 2-4 p.m., at the Roebuck Rivershore Road residence. A private memorial service will be held at a later date. In lieu of flowers, the family requests that memorial gifts be made to First United Methodist Church, 201 S. Road Street, Elizabeth City, and Shriners Hospital for Children, 2900 Rocky Point Drive, Tampa, Florida. Twiford Funeral Home, 405 E. Church St., Elizabeth City, is assisting the Roebuck family. Online memorial condolences may be sent to the family at www.twifordfh.com.