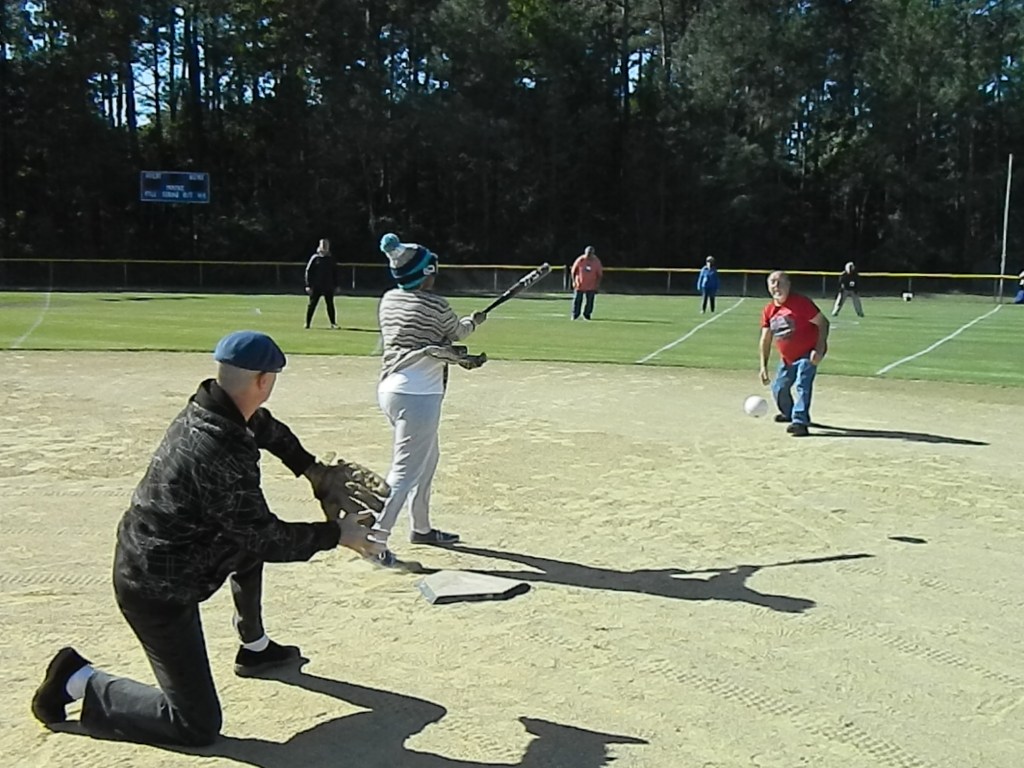 Janet Barnes, a VIP participant from Guilford County, gets a hit during a game of Beep Ball at Wescott Park Wednesday. The action was part of this week's Lions Club VIP Tournament. Jim Peele (Guilford County) was the pitcher and Michael Branson from Randolph County was the catcher. Philip S. Ruckle Jr. photo

By all accounts, this year’s event was a raging success.

“We had right at 350 volunteers from across the country and across the state,” explained White. “And with the local volunteers, at some point we had a total of right at 1,000 people touch the program.”

White added that not all volunteers were out fishing or involved in more than one activity, but through the commitment and dedication of those volunteers this year’s event was a huge success.

It was a comment echoed by Bob Walton, president of the tournament’s board of directors.

“It all went surprisingly smooth,” offered Walton. “We had a few minor incidents but no major problems. It was one of the best we’ve ever had.”
An accomplishment worth noting since there have been 34 previous annual tournaments.

Held annually the week after Columbus Day, which is observed on the second Monday of each October, Dare County plays hosts for the VIP tournament, which is the largest service project of its kind in the world.

Banding together with a unified effort Lions from Columbia, Kill Devil Hills, Lower Currituck, Manteo, Nags Head and Plymouth guide participants through a weekend they will never forget.

And, although fishing is the main draw, there are other educational, recreational and personal growth opportunities as well.

Sitting with about 600 people finishing breakfast in the Lions Club building at Wescott Park in Manteo Wednesday, VIP board member and one of several MCs during the week, Jana Peedin said this year’s schedule included an expanded education program.

“We’ve tried to include education issues that are pertinent to the visually impaired,” said Peedin. “It’s also a chance to share experiences and treatment information between attendees.”

After converging on Dare County during the weekend and on into Monday, October 22, participants were offered and almost whirlwind schedule of events for the next three days. With Manteo Lions Club Building at Westcott Park serving as the base for all operations, following the registration of participants was a barbecue and chicken dinner during which guests were welcomed by tournament and county officials.

Capping the evening’s activities a performance by the Rhondels. Attendees enjoyed dancing and listening to the band.

Tuesday, October 23, was the big event with fishing at one of the four northern beach piers or on two head boats. After the equipment was washed and fishing rods stowed, it was more dancing with entertainment by the band Out ’N Cold. Those not able to or interested in dancing were free to visit a number of vendors in the building’s meeting room, offering products and sight aids for the visually impaired.

Wednesday, October 24 saw participants in a fishing tournament at Jennette’s Pier while the rest attended educational programs at Wescott Park.

Among the presenters that day were Lion Judy Jackson, who give the latest information on coping with diabetes, and Lion Peter Crumley, who introduced VIPs to some of the adaptive technology for the blind available.

One of the more popular presenters was retired Marine Sergeant Major Mayfield who talked about opportunities for VIPs to learn skills of defense and fall prevention. He followed his talk up, as did others, with a longer discussion in one of the outside tents.

In addition to talking about Friends of the NC Library for the Blind and Physically Handicapped, Eddie Weaver introduced members to the game of Beep Ball.

A game developed more than 40 years ago, Beep Ball uses a modified, over-sized softball that beeps, which enable players to locate it, and two nearly 48 inch tall bases with foam interior and electronics that make it buzz when a switch is thrown to alert runners to its location. Unlike regular baseball where the aim is to strike batters out, these pitchers – who may be sighted – try to get the batter to make a hit to the outfield, which is divided into zones. Spotters call out the zone where the ball lands.

If a batter can run to a base emitting a buzzing sound before an outfielder picks up the ball they score a run. If the outfielder gets the ball first, the runner is out.

As in tennis, silence is golden during Beep Ball.

Spotters and other volunteers had to remind an overflow crowd more than once that quiet was needed until the umpire calls it a run or an out in order for players to locate the ball or a base.

“Wednesday afternoon is free time,” explained Peedin. “That’s when they can explore The Lost Colony, the aquarium or other sights here.”

Closing out the event, the final banquet took place Wednesday evening with more speakers and VIP fishing awards. Then, on Thursday, while most participants were heading home, tournament board members were critiquing the 2018 event and making plans for October 2019.

“I give a lot of credit to the two head-boats and the four piers for the tournament’s success,” said White. “They do not charge us for our participation and the hotels give us a reduced rate. Dare County is such a giving county. If we had to pay full price for all that we do it would cost us $250,000.”