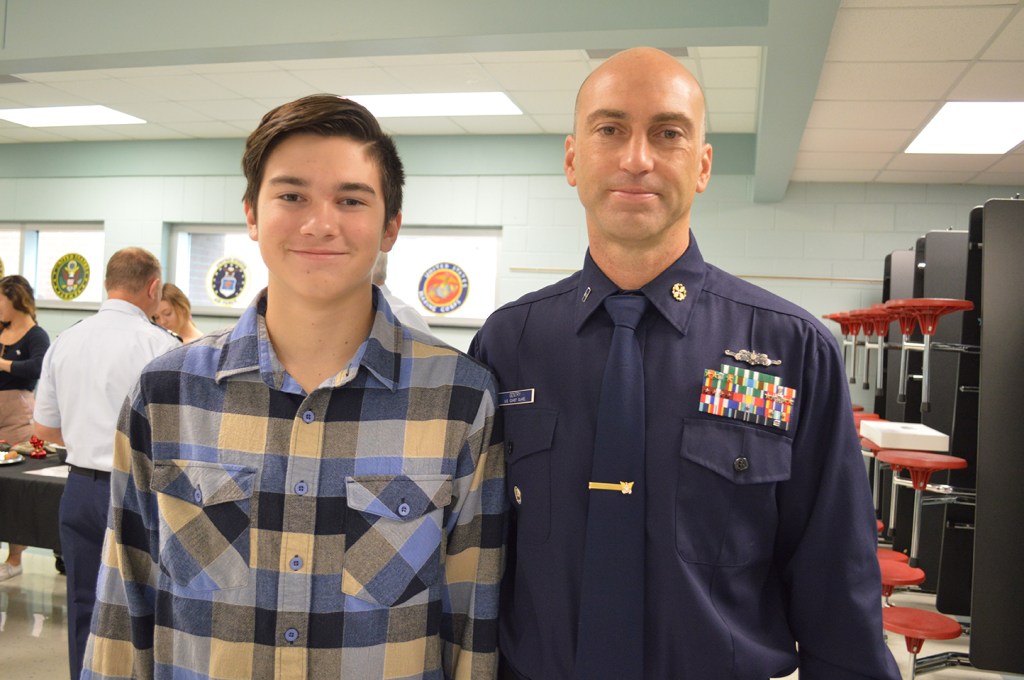 At Cape Hatteras Secondary School, a Veterans Celebration affirmed the service of about 50 Hatteras Island veterans who gathered for the event. 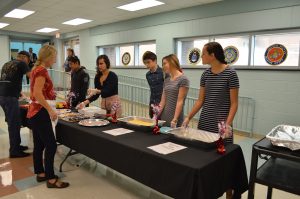 To the beat of the Cape Hatteras drum corps, veterans walked into the gymnasium to find seats facing the students in bleachers. Two veterans were rolled in. 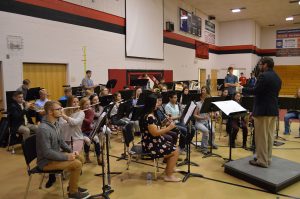 For the first time in this ceremony, Gary Kierney introduced the Missing Man Table, which symbolizes a “sad but necessary custom in the military” honoring members who are missing. Missing in action in WWII, Korea, Vietnam, the Gulf wars, and the current conflicts are more than 80,000 people. Close to the podium was a round table, showing everlasting concern for missing men and women. The table was covered with a white tablecloth, symbolizing purity of motives when answering the call of duty. 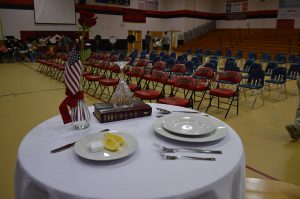 The Missing Man Table was explained during the ceremony. Mary Helen Goodloe-Murphy photo

A single rose in a vase is a reminder of the lives of these Americans. A red ribbon wrapped around the vase represents continued determination to account for the missing.

A slice of lemon reminds of bitter fate and a dish of salt, the tears shed. An inverted glass says the missing cannot toast the group assembled.

The chair is empty. The missing are not here. 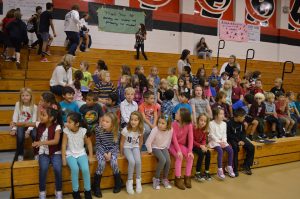 First graders from Cape Hatteras Elementary School are ready to participate in the 2018 Veterans Celebration in the secondary school’s gymnasium. The students sang and delivered cards to the assembled veterans. Mary Helen Goodloe-Murhpy photo

Then, the young students took cards to the veterans and exited the gymnasium.

Veterans were recognized by service branch, while the Cape Hatteras High School Band played each of the five service songs.

Some 25 graduates of Cape Hatteras High School are serving in the military. Names, photos, service branch and date of graduation of those graduates were displayed electronically on a big screen on the north wall of the gym. 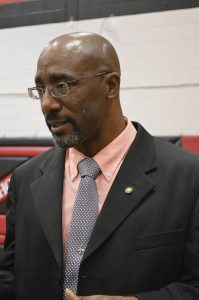 Kenneth E. Sumler was the guest speaker for the occasion. He served in the Air Force for 20 years, retiring as a Major and turned next to education. Sumler is currently the Principal at North Johnston Middle School in Johnston County. He and Veterans Celebration organizer Keith Durham were colleagues.

Sumler pointed out some events of affirmation: walking across the stage, a change of command, a decade of service. For all the student gamers, he mentioned Fortnite, a video game. The basis of that game is consistent affirmation. He brought four middle grades students down front to show dance moves, however only three participated. 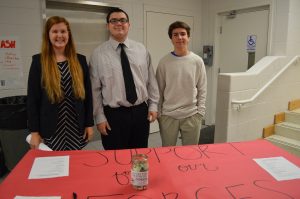 A color guard from the U.S. Coast Guard Station Hatteras Inlet presented the colors for the recitation of the Pledge of Allegiance and National Anthem, played by the band.

After he approached the podium, guest speaker Sumler said “I’m in awe right now. There are not many schools in the nation that do this.”

Cape Hatteras Secondary School in Buxton was one of two schools named by Sumler.