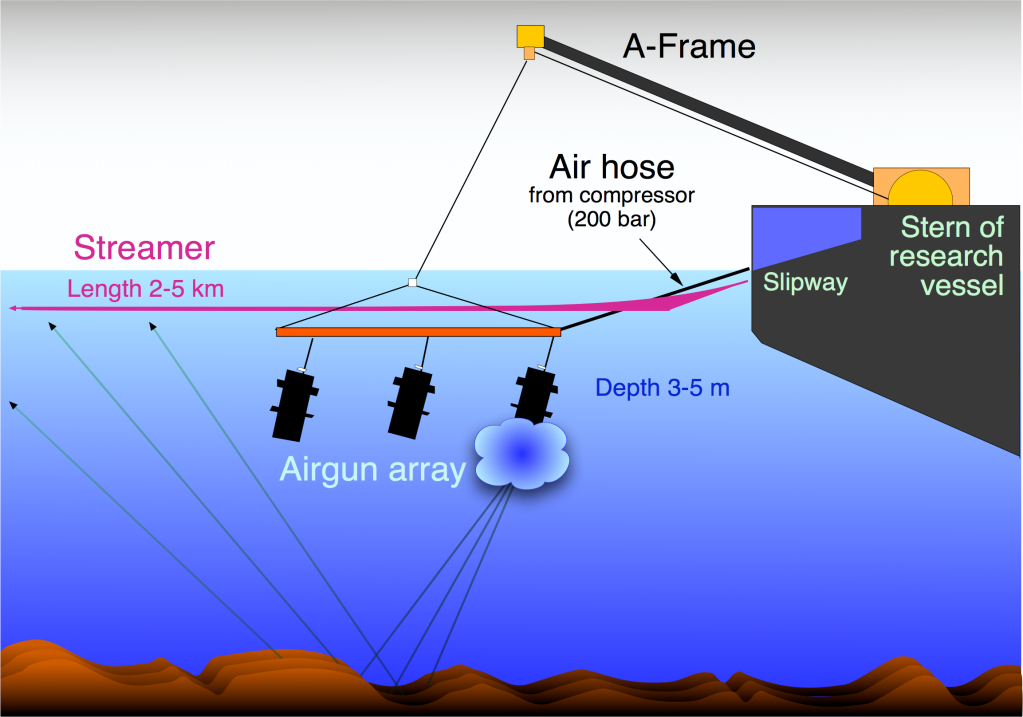 WASHINGTON (AP) — The Trump administration on Friday authorized use of seismic air guns to find oil and gas formations deep underneath the Atlantic Ocean floor, reversing Obama administration policies and drawing outrage from critics who say the practice can disturb or injure whales, sea turtles and other marine life.

The National Marine Fisheries Service said it has authorized permits under the Marine Mammal Protection Act for five companies to use air guns for seismic surveys in the mid-Atlantic, from Delaware to central Florida.

The surveys are part of President Donald Trump’s bid to expand offshore drilling in the Atlantic. The plan has drawn opposition from East Coast lawmakers and governors, who say it could hurt commercial fishing and tourism.

Seismic surveys have not been conducted in the region for at least 30 years.

Seismic air guns fire intense blasts of compressed air into the seabed every 10 to 12 seconds, for weeks or months at a time. The blasts reflect back information about buried oil and gas deposits, as well as potential seafloor hazards and sand and gravel resources for beach restoration.

The blasts are so loud they can disturb or injure endangered whales and other marine mammals and increase the risk of calves being separated from their mothers, environmental groups say.

Industry groups counter that seismic surveys have been conducted in the U.S. and around the world for decades, with little adverse impacts.

Administration officials said that under terms of the law that protects marine life, the permits would allow “harassment” of whales and sea turtles but would not allow companies to kill them.

Survey vessels will be required to have observers on board to listen and watch for marine life and alert operators if a protected species comes within a certain distance, officials said, and acoustic monitoring will be used to detect those swimming beneath the ocean surface.

Surveys will be shut down when certain sensitive species or groups are observed and penalties can be imposed for vessels that strike marine animals, officials said.

None of those precautions were enough for environmental groups and East Coast lawmakers who decried the surveys as cruel and unnecessary. The Trump administration’s call for offshore drilling has generated widespread, bipartisan opposition from states up and down the Atlantic seaboard.

Pallone called an environmentally sound coast critical to New Jersey’s economy and said lawmakers from both parties “will work tirelessly to fight this reckless decision by the Trump administration.”

Diane Hoskins, campaign director at the environmental group Oceana, said approval of the seismic surveys “flies in the face of massive opposition to offshore drilling and exploration from over 90 percent of coastal municipalities in the proposed blast zone.”

“President Trump is essentially giving these companies permission to harass, harm and possibly even kill marine life, including the critically endangered North Atlantic right whale — all in the pursuit of dirty and dangerous offshore oil,” she said, vowing ongoing opposition.

The American Petroleum Institute, the largest lobbying group for the oil and gas industry, hailed the administration’s action and said seismic surveys are just “one of many steps along a rigorous permitting process” that helps to ensure that any future drilling in the Mid-and South Atlantic would be properly managed and conducted to have minimal impact on the marine environment.

The surveys are needed to ensure oil and gas companies “can make the discoveries of resources that our economy will need for decades to come,” the group said in a statement.