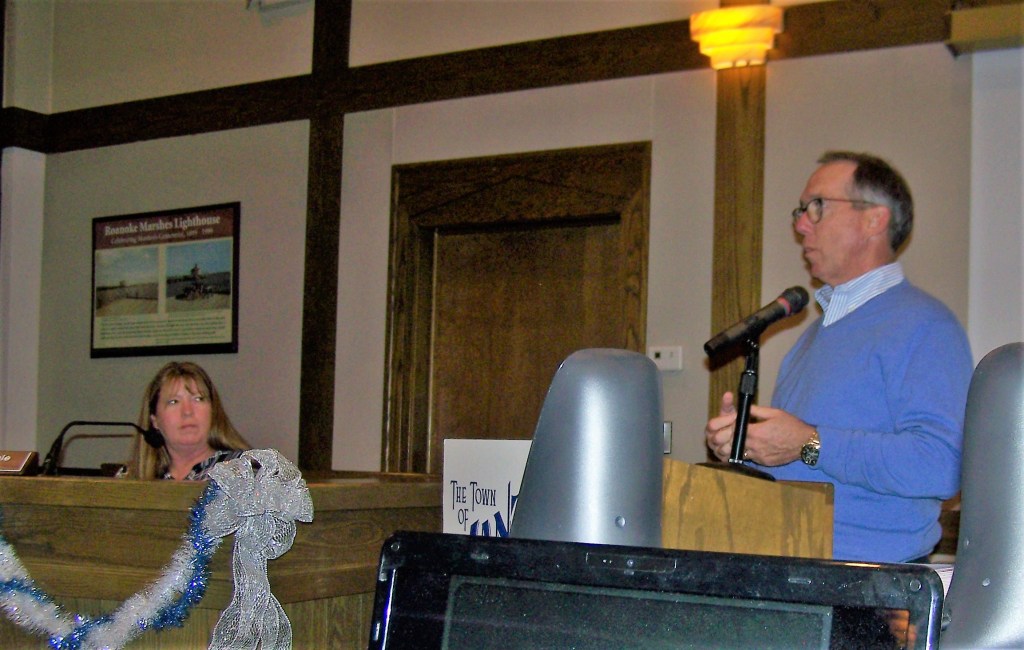 The old hotel on Budleigh Street in Manteo won’t be knocked down this week. Instead, Dare County and Manteo managers will first work out a memorandum of understanding and the town will draw up a plan to turn the property into a combination of green space and a parking lot. The aging building that stands on property in downtown Manteo and is owned by Dare County. Dare County manager Bobby Outten told the Manteo Board of Commissioners it was a win-win for everyone and the Dare County board was one-hundred percent behind the Manteo plan. Commissioner Nancy Peele is shown on the left. Gregory Clark photo

The Manteo Board of Commissioners has rejected a planning board request to undertake a legal review of the town’s entire zoning ordinances. Instead, commissioners will independently review a 20 year plan produced in 2005 and expect the town planning board members to do the same. Many of the town zoning ordinances are an outgrowth of the 20 year plan.

The current 20 year plan was developed with the help of the NC State School of Design through a series of public meetings and resident surveys. The plan is as much a vision document as a planning tool. It represents how town’s people desired the town to grow. The document clearly states that it is intended to be a “living document” and requires review and revision to meet changing views, wants and needs.

Last month, the Manteo Planning Board in a split vote recommended the Manteo Board of Commissioners begin to seek the cost of full legal review of zoning laws. In making the motion, Lee Tugwell contended that many of the ordinances may no longer be applicable, since changes have been made by the legislature. He has said that some ordinances could expose the town to expensive legal challenges.

Others saw the request for legal review as a first step to erode the zoning codes and change the direction of the town’s managed development scheme.  About two dozen residents attended the December 5 board meeting to voice opposition or concerns to the review. In spite of Mayor Bobby Owens’s assurance that the board didn’t want to change too much, those who spoke voiced fears of opening the door to large hotels, fast food restaurants and unregulated residential growth.

In the end, Mayor Pro Tem Darrell Collins asked that the request for a full legal review of the zoning ordinance be removed from consideration. He noted that the town had a capable attorney to review ordinances. Later in the meeting he suggested the board revisit the 20 year plan. Commissioner Hannon Fry agreed, “let’s review it [20 year plan] and see if values have changed.”

Letter to the Editor: Oregon Inlet Fishing Center “The…