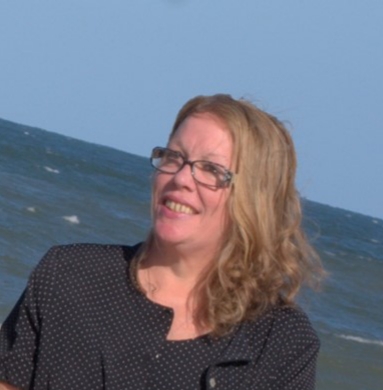 Kimberly “Berly” Holzbauer Robke was one of a kind and a Hatteras Island legend . . . at least by her own accounts. She was a proud Navy Brat because of her father, Harvey Robke’s many years of service. Having moved to Hatteras Island in 1973, Kim felt it was her true home. Kim graduated from Cape Hatteras High School in 1982, worked with the Ferry Service for several years before becoming a chief cook, and then later oversaw the food operations for many restaurants across Hatteras Island over the next few decades. She married Rick Holzbauer in 1991 and adored their son, Thomas Holzbauer, considering him to be her greatest accomplishment in life.

Kim was also well known for cooking fantastic meals with her family and friends at home. Like her mother, Myrna King Robke, she always made more than enough to share and had an open-door policy for anyone that wanted to stop by and join in the feast. Kim especially loved “honey, baby yung’uns,” all animals, and of course tunes from almost every era. She also had fiery spirit and a genuinely open heart. Berly was the queen of inappropriate laughter with an old soul, a brilliant mind, and a wicked sense of humor. She sometimes laughed so hard that she snorted and didn’t care if she did. She often amused herself so much that she would begin cackling before she delivered the punch line or finished telling her story. Kim spoke her mind whether you wanted to hear it or not! She also had a way with words and was a masterful yarn spinner who could make you laugh until your sides ached! Her smile and laugh were truly contagious. Kim loved her family and friends unabashedly and could care less if you didn’t agree with her.

Her idea of a perfect afternoon involved sitting in the backyard with the music on, the grill fired up with something tasty sizzling, drinking cold ones, and shucking oysters. She was loved dearly by many and she loved each of them just as much. Kim often made those who felt alone, feel loved, and cared about. Her light can never be replaced, and she is sorely missed by all that knew and loved her. Kim is now reunited with all the friends and family who departed before her. Her tenacious spirit, joyful demeanor, and remarkable humor will continue through our fond memories of her outlandish tales. A tribute and celebration of Kim’s life will be scheduled in the near future.

In lieu of flowers, donations may be made to the Outer Banks Society for the Prevention of Cruelty to Animals (SPCA) at https://www.obxspca.org/donate. Condolences to the family may be expressed via the online register at www.gallopfuneralservices.com. Gallop funeral services was entrusted with arrangements.