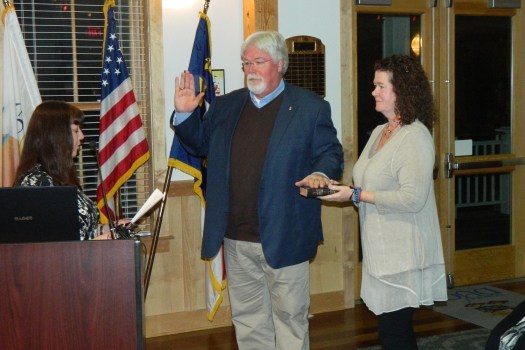 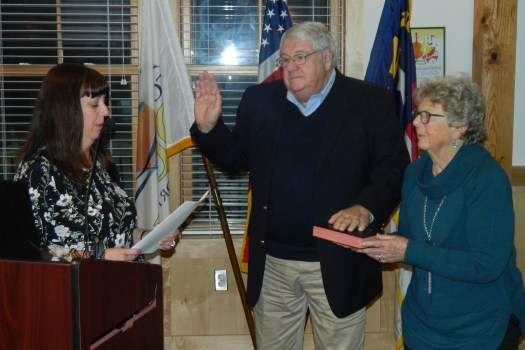 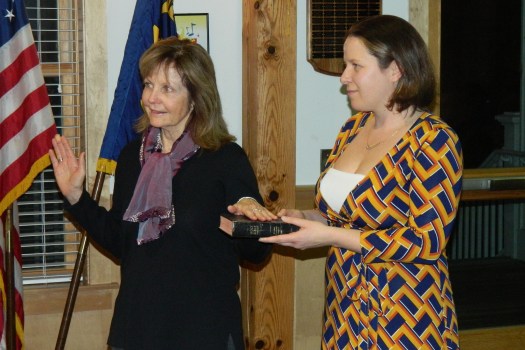 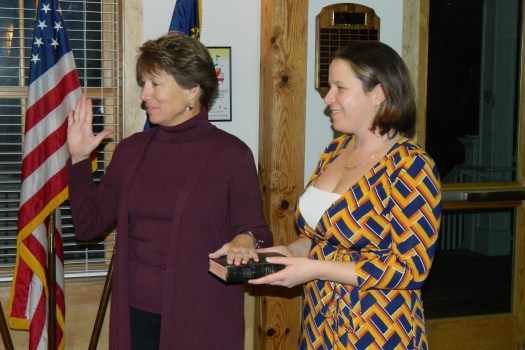 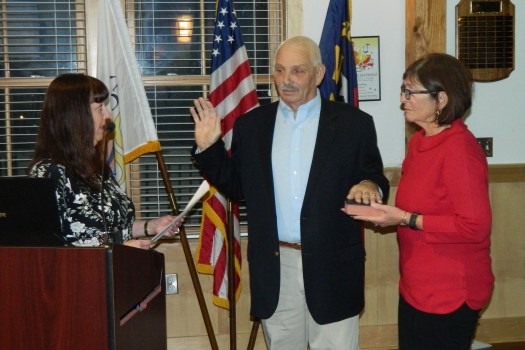 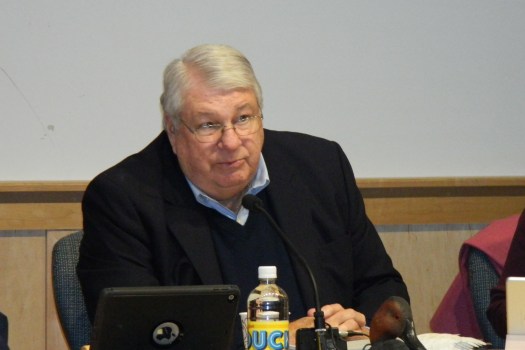 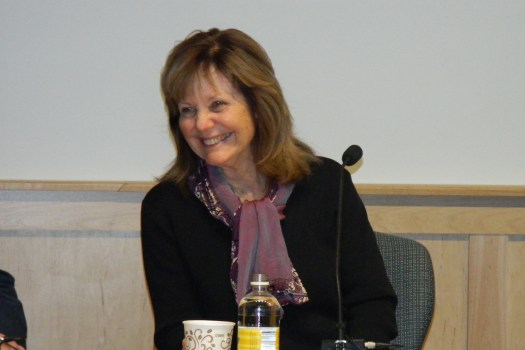 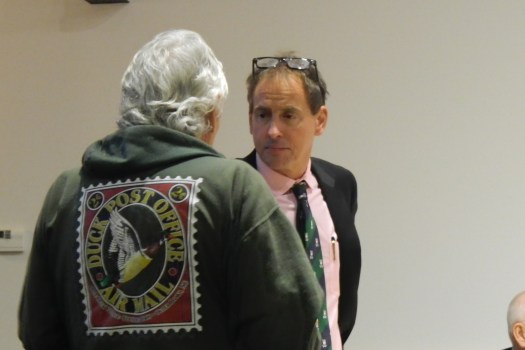 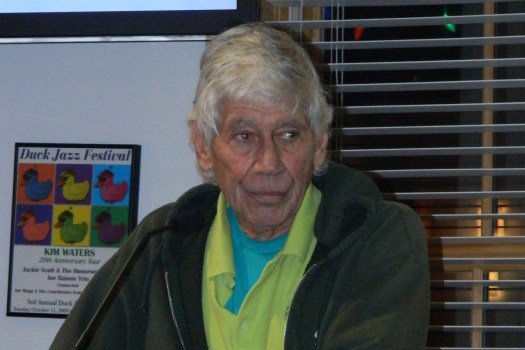 Chuck Burdick (pictured) and Jon Britt were recognized and thanked for their service to the Town of Duck as at the December 4 Duck Town Council meeting. Britt was unable to attend due to a family event. Philip S. Ruckle Jr. photo 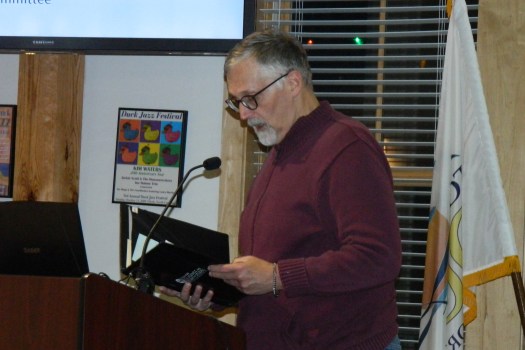 Michael Fletcher was at the December 4 Duck Town Council meeting with a review of the 407 survey responses regarding interest in establishing a library branch on the northern beaches. Philip S. Ruckle Jr. photo

Then, without opposition, Kingston and Thibodeau were re-elected mayor and mayor pro tempore, respectively, in council’s first action for the night, which was followed with resolutions honoring and thanking former council members Chuck Burdick and Jon Britt for their service to the Town of Duck.

Burdick, a full-time resident of Duck since 2000 who serves as the town’s contract postmaster, was elected to the Town Council in December 2009, re-elected in November 2011 and has served as a council member from December 2011 through November 2019.

Britt, the owner and operator of Nor’Banks Sailing, has been a Duck resident since birth and a community leader all his life. A member of the first Duck Planning Board in 2003, Britt was vice chairman from 2005 through 2007 and then chairman from 2008 through July 2012 when he was selected to serve a one-year Town Council term. He was then elected to a full Town Council term in November 2013 and has been a council member through November 2019. He is also the longest serving volunteer firefighter in the Duck Fire Department.

The next action for the new council was a look at guidelines for implementing the Village Commercial Development Option as a special exception.

Under the current VCDO ordinance, Town Council has been able to exercise considerable discretion when ruling on development applications. In an effort to move from a limited number of non-specific and somewhat subjective criteria to a more objective list of guidelines, the Planning Board wrestled with how to maintain the general intent of the VCDO: that any proposed development should be consistent with or enhance the character of Duck Village.

After considering a number of options, which at one time included a detailed scoring system that was seen as too cumbersome and eventually discarded, Planning Board members developed a proposed a set of design criteria guidelines they felt would help quantify whether or not a proposal is consistent with the character of Duck Village.

According to community development director Joe Heard, Planning Board members decided that using proposed criteria as guidelines Town Council would still have great flexibility in determining a proposal’s compatibility with the Village Commercial district and applicants would have a better idea of what characteristics council would be considering during the VCDO application process.

After looking at the proposal during its November 6 meeting, Duck Town Council members voted to have the Planning Board discuss and reconsider a section that prohibited using VCDO requests to remedy existing violations.

At its next meeting, on November 13, Duck Planning Board did consider the request and voted unanimously (5-0) to resubmit its original recommendation without any changes to the previously submitted text amendment ordinance. It was noted that board members inserted the restriction during an early stage of the ordinance discussion and still consider it an important standard the will discourage business owners from seeking forgiveness for violations through the VCDO process.

During Wednesday night’s discussion, Kingston advised that while there were some concerns with parts of the ordinance at the November meeting, it was also sent back to the Planning Board because only four council members were present and no matter what came back, a new council would be looking at it.

“I think the Planning Board has done a very good job,” Kingston added.

Council then gave the recommendations a unanimous 5-0 vote of approval.

Another unanimous approval was for the use of pervious or semi-pervious parking surface materials on commercial properties.

Changes to Section 156 of the Town Code include excluding gravel driveways, parking aisles and parking spaces from lot coverage calculations similar to the current exemption for residential parking spaces and, since commercial parking areas are subject to more intensive use by larger vehicles, a set of general commercial parking standards were established intentionally flexible to allow an applicant’s engineer to design a suitable solution for any specific site. To prevent rocks and gravel from migrating onto any adjoining sidewalk, bike lane or roadway, an asphalt or concrete apron is required at a driveway entrance.

In response to public concerns that the change might open the door for developers to gravel the entire property just to get in more parking, Heard explained that setback and septic requirements would limit some of what developers can do. He went on to say that commercial parking guidelines also come into play that impose limits on how much gravel could cover.

Parking also appeared to be a major concern for Tommy Karole, who asked council during his public comment times to intervene in an administrative approval for a bicycle rental shop at 1566 Duck Road. According to Karole, there are not enough parking spaces at the former seafood location and the Paper Canoe restaurant next door.

Council does not respond to public comments, but Heard was asked to explain some of the details behind Duck Cycle’s application for 1566 Duck Road. An earlier request to include an ice cream parlor was withdrawn, making it an administrative review. Heard added after the meeting that the town is limited in its ability to restrict an approved use when applicants comply with all existing guidelines.

It was also noted that even though Burdick is no longer a Town Council member, he is still the current Duck representative on the Dare County Tourism Board with one year left on his term. Because the enabling state legislation for the board requires appointees serve out their term and state law supersedes any local regulations, the town’s legal counsel has advised that Duck should not submit any replacement names.

Layton also pointed out that one other election impact was to the makeup of the Land Use Plan Advisory Committee. Specifically, Britt was appointed as a Town Council representative and Whitman was the Planning Board representative. Because Land Use Plan work is close to being half done, Layton recommended no changes to the current make-up of the committee other than to request Planning Board recommend one of its members to be added to the committee.

Council also heard without taking action a Southern Shores Library Committee presentation by Michael Fletcher on the results from a recent survey conducted regarding any interest or need for a library branch located in Southern Shores.

According to Fletcher, more than 80 percent of the 407 survey respondents provided a favorable response, along with 120 individual comments. Most study participants included residents of Southern Shores, Kitty Hawk, Duck, Martin’s Point and non-resident Dare County homeowners who live more than five miles from an existing library.

Fletcher concluded his presentation saying the committee is looking at several potential sites and hopes to make an announcement about a possible location and cost analysis soon.

Regular session meetings begin at 7 p.m., mid-month meetings are at 1 p.m. and the February retreat dates are all day meetings.