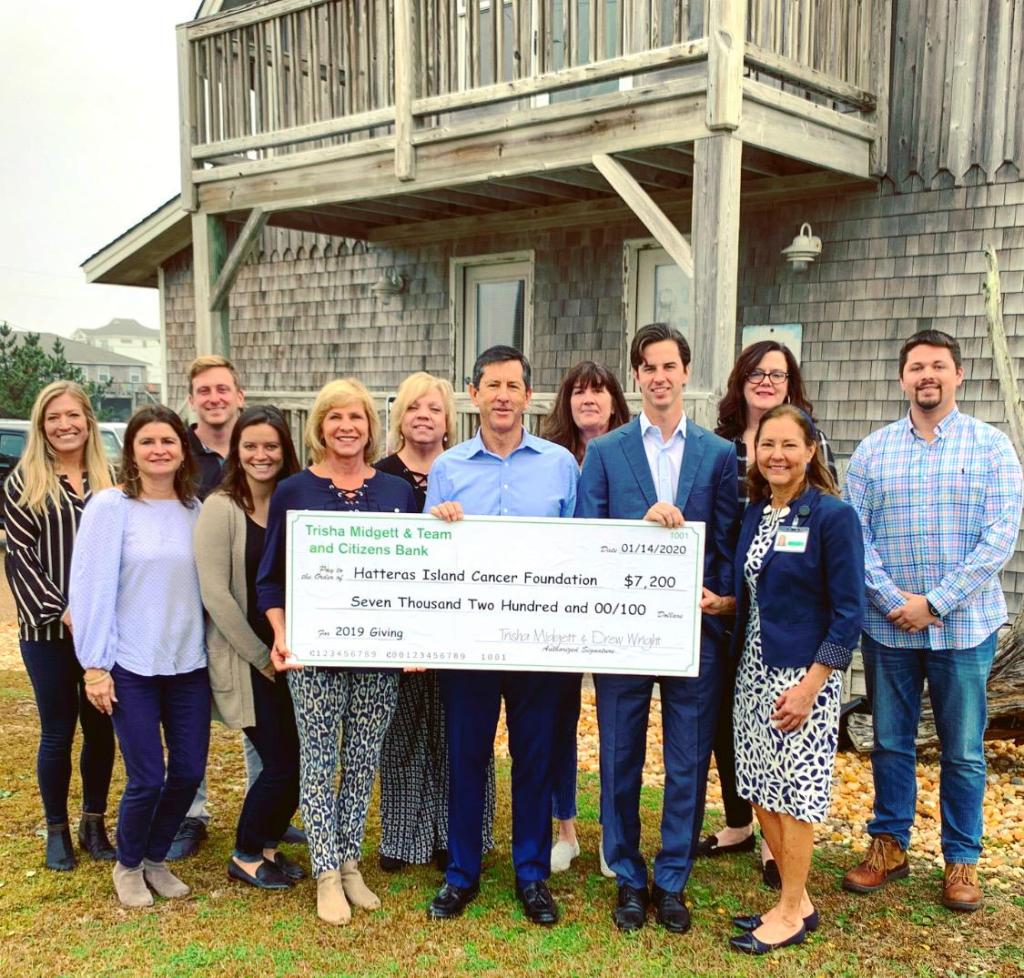 Trisha Midgett and her team – John Mills, Ashley King, Courtney Snearer and Michael Milteer – from the Rodanthe office of Midgett Realty and Drew Wright and his team – Alex Wright, Betty Brickhouse and Deborah Beddingfield – from Citizens Bank in Southern Shores presented the Hatteras Island Cancer Foundation (HICF) with a check for $7,200 that they collectively raised in 2019.

At the end of 2017, HICF received an email from Wright, who wanted to give back to the community. He had shared his idea with Midgett and she recommended that donations be made to HICF. As an added bonus, Citizens Bank matches charitable donations their employees make up to $1,000 per year through their Citizens Helping Citizens initiative. By the beginning of 2018, HICF had been approved by Citizens Bank to receive matching gifts and Wright wrote “We will be making contributions on the behalf of Trisha Midgett. I work with Trisha and her clients often and have made it my goal for 2018 to make $100 contributions – $50 from myself or team and $50 matching from Citizens – to the charity of her choice for every closing we do with her going forward.” HICF was thrilled to receive $1,800 in 2018 from this partnership.

Midgett and Wright raised the bar for HICF in 2019 with more giving. For every closing they did together, Midgett and her team donated $100, Wright and his team donated $100 and Citizens Bank matched Wright’s contribution, resulting in a $300 donation to HICF per closing. Their generosity and goals of giving were also shared with the mortgagees and HICF often received an additional $100 from them.

“Trisha and Drew’s efforts have made a significant positive impact for the Hatteras Island Cancer Foundation and all those that come to us seeking assistance while battling cancer,” stated a release from HICF

The Hatteras Island Cancer Foundation, an all-volunteer non-profit organization, provides support for cancer patients and their families who live on Hatteras Island. Founded in December 2000, the group’s primary goal is to raise funds to offer financial support for patients to help them pay for medical costs not reimbursed by insurance and to pay for travel expenses for themselves and their care givers to medical centers for cancer treatment. To date, the Hatteras Island Cancer Foundation has assisted 187 islanders with cancer and their families with grants in excess of $935,000.