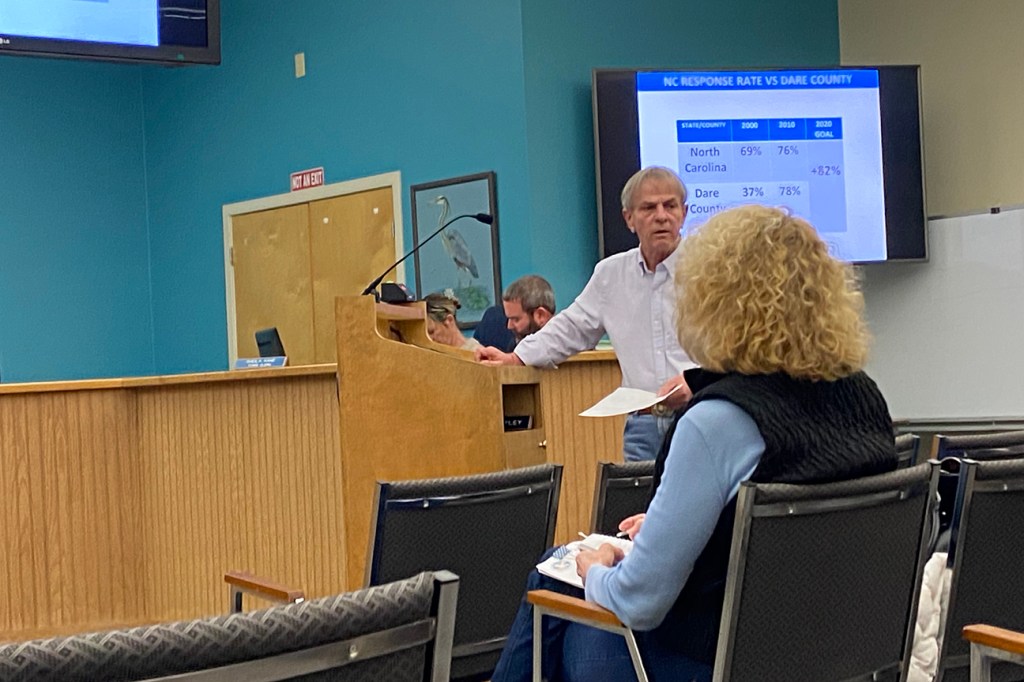 Councilman Jim Conners felt entering into a partnership with Duck for a beach nourishment RFQ was premature. Danielle Puleo photo

The Southern Shores town council met March 4 to discuss with their Interim Town Manager the possibility of partnering with Duck on a request for qualifications for professional services to assist in possible beach nourishment projects.

Interim Town Manager Wes Haskett told the council that he, along with the managers of Kill Devil Hills and Kitty Hawk, had been approached by the town manager of Duck. Duck will soon be released an RFQ for future beach nourishment and related shore line management projects, to which the towns were invited to be included in.

The goal of the RFQ is to “obtain a consultant to assist the town in providing engineering services for permitting, design, planning maintenance and financing,” Haskett explained. He added that partnering with Duck in this RFQ would be a step in ensuring that the projects are eligible for FEMA reimbursements, but does not commit the town to a beach nourishment project or any costs.

Haskett said that partnering with Duck would save time in the long run if the decision was to move forward with beach nourishment. “If you all decide you don’t want to do a project this year, then at some point we’re going to have to do one anyway,” Haskett said.

Councilman Jim Conners had reservations with the RFQ. “Something doesn’t sit right with me in approving this right now and we haven’t even committed to doing a beach re-nourishment project,” he said. Conners not only found the plan premature, but had suspicions that entering into an RFQ would waste time, being that APTIM seemed to already be the selected consultant.

Other council members disagreed with Conners; Councilman Matt Neal made note that with the commitment Southern Shores had made to Pelican Watch, that project would “fit into a more cohesive design, and part of RFQ is analyze existing beach management plan and finance structures.”

Mayor Tom Bennett recognized those that had come to speak at public comment in previous meetings. We have had people sitting at the last two meetings complaining that we are not bringing in outside consultants to help us make this decision,” he said.

Conners was not convinced. He did not find the timing appropriate and wanted to see how much it would cost individual property owners before making the decision.

Neal wanted to know down the road how a decision would be reached if there were multiple consultants favored by individual towns. Haskett said that going into the presentation of options, town staff would have a clear choice to assist the council and other boards in their decision.

After a lengthy discussion, Mayor Pro Tem Elizabeth Morey made a motion to direct Haskett to inform Duck that Southern Shore would like to be included in the RFQ for a multi-town beach management project. She added, “I think there’s some benefits to coordinating and making it more of a county-wide approach.” In a vote 4-1, the motion carried.

Haskett also presented the report from the capital infrastructure improvement committee, who met Feb. 26. The committee found that after receiving estimates from the town engineer, the remaining funds were insufficient for this fiscal year to complete the Hilcrest Dr. and Sea Oats Trail St. street projects.

Haskett said the committee recommended that the Dewberry Ln. construction project move forward this fiscal year as well as lane expansion of E. Dogwood Trail where the road intersects with Highway 12.

For the Hilcrest Dr. and Sea Oats Trail St. street projects, the committee recommended the leftover funds from the S. Dogwood Trail walking path be included in the budget for next year. To move forward with E. Dogwood, the contractor would perform work as a change order.

The cost of the E. Dogwood project is about $28,000 with the option to include a grass buffer for an additional $5,700. Bennett inquired about the grass buffer being done inhouse rather than paying the contractor in order to save money.

Haskett felt the town could look into their public works department to see if they could perform the project themselves. After speaking with Police Chief David Cole, who felt the intersection of Dogwood and Hwy. 12 was unsafe, Neal made a motion to move forward with the two projects and authorized Haskett to look into public works completing the project at a lower cost.

Morey felt that was “a whole lot of money to play for not a lot of gain.” Eventually, the council reached a consensus and the motion carried unanimously.

Family gets together to honor Ab and Irlene Wescott