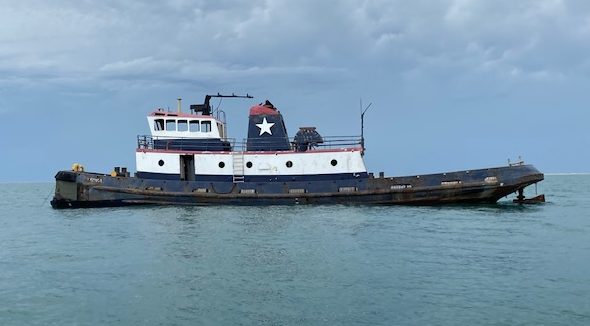 On Jan. 26 of 2020, work began on the Outer Banks’s newest artificial reef, AR 165. The Outer Banks Anglers Club, in partnership with the North Carolina Division of Marine Fisheries, has been working for over six years to bring this project to life.

This new reef, located approximately eight miles south of the Oregon Inlet sea buoy and three miles from the coast, will serve as a hot spot for marine life. Anglers will be able to enjoy this brand new 162-acre area, serving as the site of the fifth reef off the coast of Dare County. 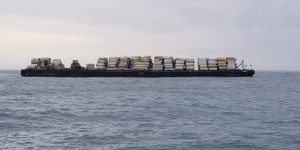 The America is a 104-ft. long tugboat built in 1956, provided by Coleen Marine in Norfolk, Va. Coleen Marine has also supplied all of the concrete for this project, reported Dick Parker, chairperson for the Oregon Inlet Artificial Reef Committee.

Parker said that unlike when the first tug was sunk, the second sinking could not bring the same crowd with it. “The marine fisheries officials could not be in attendance,” he said, due to the COVID-19 pandemic.

The OBAC enlisted the help of local shrimper Bo Davenport to take the crews out from Oregon Inlet. Parker said the club members were also not able to go out to sea this time around.

Despite not witnessing the continuation of construction, Brian Forbes with the OBAC said construction is “going better than expected.”

“I didn’t expect this much to get done at this time of the year,” Forbes admitted. Due to the small weather window along with windier days, Forbes felt the project is exceeding his expectations in completion time.

The project has a set completion date of June 30. The final steps of the project include adding about 3250 tons of fabricated concrete and sinking the final tugboat, the Valley Forge.

“Two more deployments and we should be done,” said Parker said. Forbes added that sinking the Valley Forge will probably be next on the list, followed by the final addition of concrete.

For more information on the OBAC, visit their website at www.outerbanksanglersclub.com or the Outer Banks Anglers Club Facebook page.