Just north of Manteo on Roanoke Island lies a coastal farm replica, known as Island Farm. This unique farm was designed with its roots in mind.

In the late 1700s, the land where Island Farm rests now was deeded to members of the Etheridge family. Jesse, Tart and Adam III Etheridge began what would, at one point, cover over 400 acres of farmland.

The Etheridge family became well known on Roanoke Island for their agricultural dominance and wide swept, abundant fields of crops and livestock.

The site today showcases what the farm produced back in the mid-1800s. The Etheridge farm grew corn, peas and potatoes. It housed horses, sheep, oxen, pigs and chickens and would supply fish for the community.

The son of Adam Etheridge III, Adam Etheridge IV, married Francis “Fanny” Baum and built a large farmhouse on the property around 1845. The timber frame of the structure was built mainly from heart pine; the area on Roanoke Island where the homestead lies was commonly called “Logtown” during that time period.

Along with the growing of crops, the Etheridge farm would produce butter, milk, tea and more. A large windmill overlooks the farm from across the street today. At one point, a windmill on the farm was used to make cornmeal.

The Etheridge family had hired help for daily chores around the homestead, such as cooking, cleaning and working in the field. One cook, Crissy Bowser, lived on the farm until she was believed to be 100 years old.

Bowser worked as a cook from 1900 to 1910 and she continued to live on the farm until her death. She is buried at the foot of a large oak tree on the property.

A gravesite dedicated to the Etheridge family borders the farm and holds those that began the now historic site. Decedents are the only ones that can be buried alongside their ancestors there.

Island Farm features a blacksmith shop, which would not have been found on the farm, but would have been likely close by back in the 1800s. Looms are contained within the walls of the structures at Island Farm as well to demonstrate the intricate weavings that took place back then.

The farm now resides on 14 acres of land and still focuses heavily on agriculture and preserving the history of the Etheridge family. It was donated to Outer Banks Conservationists in 1997 by descendants.

In 2001, restoration to the Etheridge farmhouse began and it is now one of the only original structures on the property. In 2010, the farm was opened to the public.

To learn more, visit the Island Farm website at www.obcinc.org/vist-our-sites/island-farm.

PHOTO GALLERY: Life on the Farm 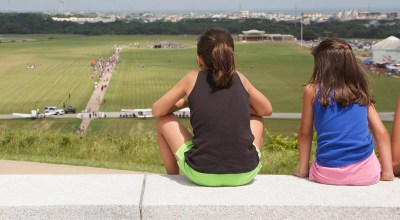 Update on COVID-19 numbers and metrics