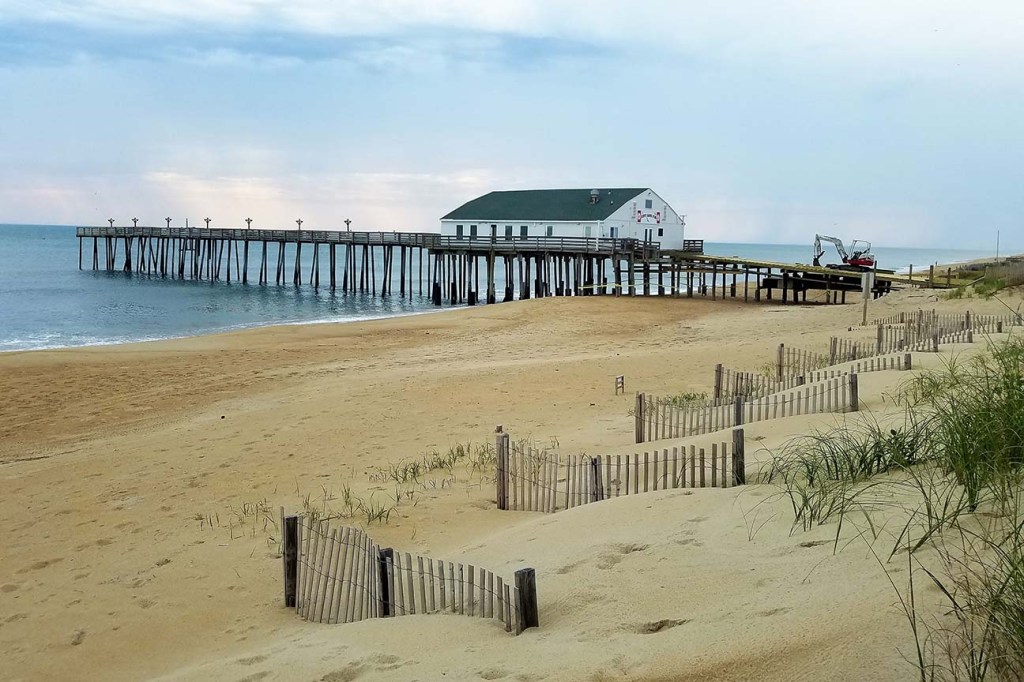 A new entry ramp is going in at Kitty Hawk Pier. Courtesy photo

Fishing has picked up over the past couple of weeks, but things are not quite back to normal yet due to stay at home orders issued by area counties and Gov. Roy Cooper.

But hey, the fish don’t know this and they been found hanging around just south of each of the ocean piers on the northern beaches, which are all closed for business.

Manteo’s George Cecil had a terrific two-day run when he first landed a large, 26.75 inch spotted or speckled sea trout while jigging in the surf in Kill Devil Hills Sunday, May 3. It weighed five pounds, 10 ounces. 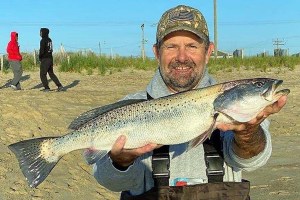 He followed up that feat early last Monday in Nags Head with a catch, kiss and release of a 35-inch long striped bass on his trout rod and rig with 10 pound test. It must have been early because it’s dark out in the photo he sent in.

“I also had 11 trout and 15 bluefish,” he reported. He’s fresh off a winter of offshore bluefin tuna fishing, he added.

Now that Dare County has loosened rules and allowed non-resident property homeowners to “the beach,” many are asking about when ocean piers will open. From the looks of things, most all of them are doing repairs and cleaning.

At Outer Banks Pier, however, Garry Oliver said they opened for fishing and tackle sales Friday, May 9, but not the restaurant, Fish Heads Bar & Grill.

“We’re glad to see some people back down here,” he said Tuesday. “I know the non-resident property owners want to get back in.” They had recently caught two nice puppy drum, each 24-inches long.

On Rodanthe Pier on Hatteras Island, things were slow Tuesday because of winds and rain but they’ve opened on April 27. Anglers have caught sheepshead, sea mullet and bluefish.

At the other end the beach, each pier is closed.

At Kitty Hawk Pier, the main ramp is being replaced and the parking lot of the Hilton Garden hotel is closed off to traffic. About the fishing pier, the front desk attendant Chris simply said: “I have no clue.”

Three trout guys were south of Kitty Hawk Pier, but no was doing much outside “a few blues,” one angler said when he was headed back to his vehicle.

At Avalon Pier in Kill Devil Hills, tons of work has been completed there with a facelift on the front, a new side entryway and, of course, the “High Tide” oceanside sky deck. 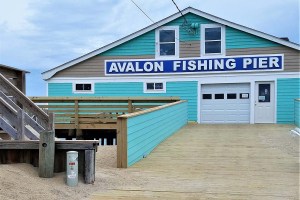 Avalon Pier has been making a lot of repairs, improvements and additions during the off season. Courtesy photo

A few workers were pitching their lines Monday morning, but it didn’t look like much was happening. For safety reasons, they are the only ones allowed to wet a line there, pier staff said.

She seemed a whole lot more worried about the virus spreading than she did about the construction or reopening. Walton thinks people should protect their elders with safety first. She has friends and family who have “got it.”

In general, people should take their time getting back to normal. Besides, to live on the Outer Banks one must take the “good with the bad.”

At Nags Head Fishing Pier, everything was shut down except the beach fishing on Monday morning. One angler reported a nice mix of blues and specks early and there were about eight guys giving it a go. 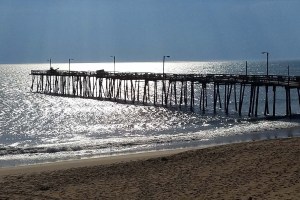 The morning sunshine sparkles off the ocean at Nags Head Fishing Pier where anglers were catching blues and trout Monday morning. Courtesy photo

“It started slowly about six and by dusk it was on, lots of bluefish!” he said. He was bottom fishing with shrimp on bottom and bait plug with cut mullet on top.

“I caught the last one on seven foot rod and it hit,” Hardy said, “and it nearly pulled the rod out of my hand!”

At Jennette’s Pier, the state-owned facility remains closed as well. Operated by the N.C. Aquariums, they are mandated to follow orders handed down by the Department of Natural & Cultural Resources under the advice of Gov. Cooper. At this time, they do not have a targeted date to open, said director Mike Remige.

“We’ll reopen when the governor feels it’s safe to do so,” he said Tuesday.  “And we look forward to that day.”

Unfortunately, they will be canceling their annual Family Fishing Tournament scheduled for June 6.

READ ABOUT MORE ON THE WATER NEWS HERE.