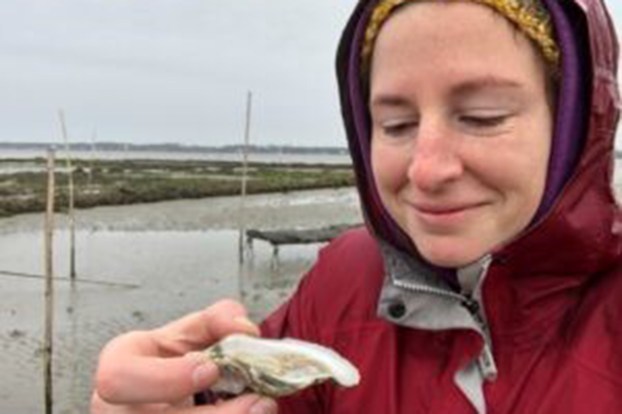 The North Carolina Oyster Trail is accepting membership applications on its new website, NCOysterTrail.org. The website provides details on how to apply and also features an interactive map that will display member sites after they join.

“Shellfish growers are excited about the opportunity to tell their story,” says North Carolina Sea Grant coastal economist Jane Harrison, who leads development of the trail. “People want to know where their seafood comes from. The trail makes these connections.”

For example, Seavisions Charters provides educational tours of Sandbar Oyster Company in Beaufort. Captain Monty Poling of Seavisions is a U.S. Coast Guard-licensed master captain who takes visitors out on the Newport River to see how oysters are grown. His tour groups often run into David “Clammerhead” Cessna, co-owner of Sandbar Oyster Company, who is always game to share his innovative techniques for growing shellfish.

“I’m honored and proud that Seavisions Charters is the first business to sign up for the trail. This is a model for other states to look toward,” says Poling, who goes by Captain Monty.

Opening of trail sites and trail events are subject to state and local government rules on business activity in light of the COVID-19 pandemic.

“As travel restrictions ease, folks still may be staying closer to home,” Harrison says. “You can get the taste of the ocean wherever you are by asking for N.C. oysters at your local seafood market. Some seafood retailers and oyster growers even deliver to your door.” 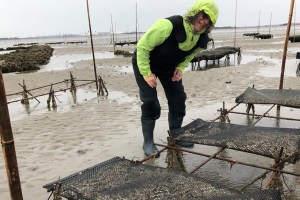 “We see this trail as raising awareness of the burgeoning shellfish aquaculture industry and highlighting the importance of clean water to grow and support this industry. North Carolina has some of the most pristine waters in the country that grow a wide variety of oysters,” she says.

As part of the trail experience, visitors will soon be able to tour the Coastal Federation’s office, where they can learn about shellfish ecology and the importance of oysters to the local environment, as well as tour a demonstration oyster lease on site. Contacting the office to confirm that it is open to visitors is advised.

Oysters benefit the marine and coastal environment by providing the “three Fs”:

– Food: Oysters are a food source for humans and other animals.

– Filtering capacity: Oysters improve water quality as they strain water through their gills.

– Fish habitat: As wild oysters grow, they fuse together, forming rock-like reefs that provide habitat to hundreds of animal and plant species.

One benefit of trail membership is marketing support. For example, trail administrators expect long-term benefits of increased visitation during the off-season, greater awareness of the N.C. oyster brand, and protection of the coastal environment.

Managers of trail sites must pass an online NC Oysters 101 quiz and display recognition of membership with a banner. As membership applications are received, detailed information about trail sites will be added to the website. For more information, go to NCOysterTrail.org.

READ ABOUT MORE ON THE WATER NEWS HERE.

On May 28, the Dare County Board of Education approved plans for a “drive-in” graduation ceremony to be held for... read more

Letter to the Editor: Reader: ‘Offensive mascot should be replaced’