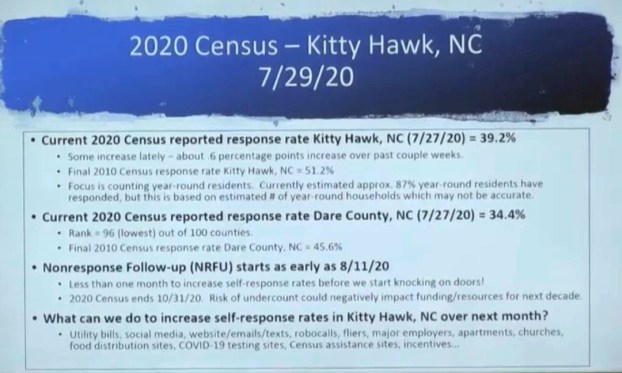 Mayor Gary Perry urged citizens to respond to the 2020 Census if they have not done so already. Courtesy Town of Kitty Hawk

At their regular meeting on August 3, the Kitty Hawk Town Council attended to a short agenda.

Council first agreed to schedule a public hearing for September 8 to review a text amendment dealing with building height. Mayor Gary Perry noted that height has been a “tricky issue” for the town since its inception.

This amendment would measure building height from finished grade and place a limit on the amount of fill permitted on a lot. Comments are welcomed and can be submitted to the town regarding the matter prior to the hearing.

However, Perry added, “I don’t think that’s quite true; the percentages look worse than they are because percentages are being averaged over a larger population.” Either way, Kitty Hawk’s mayor wanted the public to understand how important responding to the census is.

“Each person accrues about 2,000 per person per state distribution over the next 10 years,” Perry said. Not only can the response rate bring money to Kitty Hawk from state distribution, it is important for redistricting and determination of Congress and Senate seats.

“If there is someone else in the family that is elderly and doesn’t know how to use a computer or doesn’t feel comfortable using a telephone, maybe a family member can help them,” Perry suggested. Due to the virtual nature of the census amid COVID-19 concerns, he noted that technology is the major way to self-respond this year. However, other methods are available.

Citizens can respond via telephone or by mail as well as online. Perry said that the young folks of the community could perhaps reach out to those that are older. Churches or homeowners associations could put out flyers to help spread awareness. “Help yourself, help your community and help your state.”

For more information on the 2020 Census, visit www.my2020census.gov.

North Carolina Insurance Commissioner Mike Causey, noting that the state has suffered from both an earthquake and a Category 1... read more