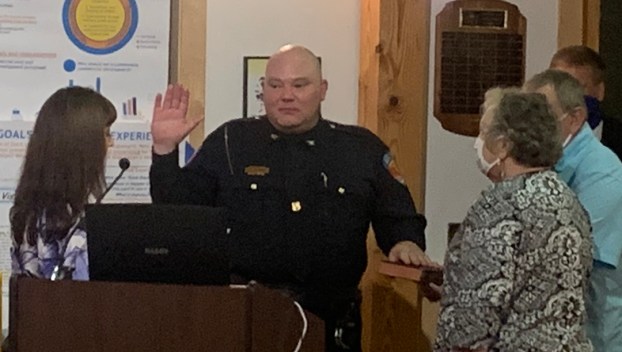 Jeffrey Ackerman was sworn in as Duck’s newest chief of police with parents David and Maryann Maryott at his side. Courtesy Town of Duck

Among the first actions by Duck Town Council members at their August 5 meeting was the approval of a consent agenda that included minutes from the June 10, June 17 and June 18 meetings; a FY 2020 audit contract with the accounting firm of Johnson, Mizelle, Straub and Murphy; a temporary maintenance contract with Coinjock Landscaping; an inter-local agreement between Dare County and the Town of Duck for hurricane/disaster debris removal monitoring; and a resolution honoring and thanking John R. Cueto, former police chief, for his service to the Town of Duck.

Although he was unable to attend the meeting, Cueto, who retired August 4, was recognized for his work in establishing a nationally recognized organizational structure, developing a unified fleet of police vehicles, overseeing the addition of three new police officer positions, implementing the first department-wide body camera system within Dare County and obtaining the grant funding for Operation Shield, a countywide automatic license plate reader network that has resulted in the closure of several significant criminal cases and has been widely recognized as a success.

Then, during a special presentation, council oversaw the swearing in of Jeffrey Ackerman as the town’s newest chief of police.

Ackerman began his law enforcement career with the Nags Head Police Department in 1998. He then moved on to the Dare County Sheriff’s Office, working for Sheriff Bert Austin as a D.A.R.E. officer and running a therapeutic wilderness program.

Shortly after Duck incorporated as a town on May 1, 2002, Ackerman joined the Duck Police Department as a patrol officer in 2003. Rising through the ranks, he was promoted to sergeant, first sergeant and then lieutenant, where he supervised the day-to-day departmental operations under the direction of Cueto.

“I started with Duck on the ground floor and it has been an interesting 17 year ride,” said Ackerman in a telephone interview. “It really is a privilege and an honor to work for the Town of Duck and be a part of what is, without question, the finest community on the Outer Banks.”

When asked about the direction for the Duck Police Department, Ackerman said after working hand-in-hand with his former chief over the past five years, he plans to take up where Cueto left off.

“I have a renewed excitement for where the department is going to go and what we are going to accomplish,” he added. “I want to continue to expand on the latest technology and policing techniques. I’ve been fortunate to have been involved in everything along the way to make Duck Police Department what it is today.”

At Wednesday’s meeting, moving on to action items on the agenda, community development director and interim town manager Joe Heard, along with Jay McLeod with Stewart Planning Consultants, gave a tag-team presentation that led to council’s approval of a resolution adopting a new comprehensive and CAMA land use plan for the Town of Duck.

Other business for the evening include a review of Duck Sweep volunteer activities, a resolution supporting the expansion of Dare County ambulance services in Duck when available, a beach nourishment update and a financial statement review.

With no mid-month meeting planned, the next Duck Town Council meeting is set for 7 p.m. on September 5.

Brothers Shams, 10, and Hashim Elmenshawy, 8, left,  of Washington, D.C. had a super time bottom fishing at the Jennette’s... read more