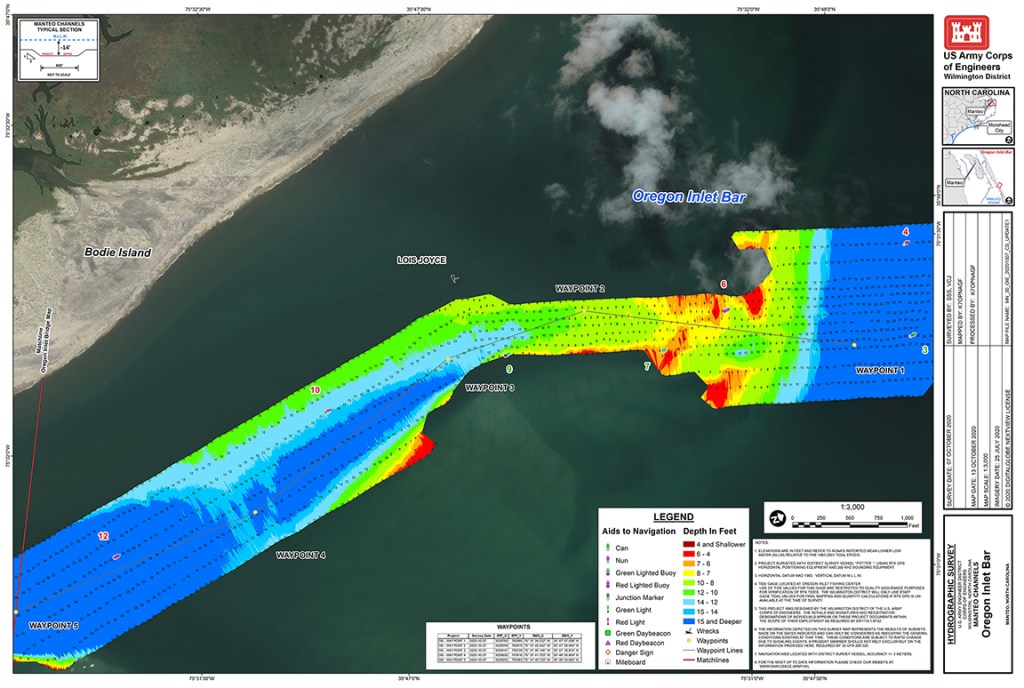 “We’ve had a lot of complaints,” said Jim Tobin, chairman of the Oregon Inlet Task Force.

Shoaling at the Oregon Inlet ocean bar has reduced depth to five to seven feet according to the most recent survey conducted by the U.S. Army Corps of Engineers.

The Oregon Inlet Task Force, at its regular monthly meeting on Tuesday, Oct. 13, also learned that Corps dredges will soon arrive to fix the bar and another spot in the channel.

The Corps hopper dredge Currituck, which works on ocean bars, and the sidecaster dredge Merritt may arrive at Oregon Inlet Oct. 25 to 27 to begin work. The dredge Currituck will work through the middle of December.

“Shoaling at the ocean bar, east of the bridge and north of the fender system have major impacts on the demolition operations,” wrote NCDOT’s Pablo Hernandez.

Hernandez reported “water depths around the bridges have changed significantly since the storm the week of Sept. 21. The water depths after the storm allowed a brief opportunity for a crane barge to remove the concrete spans from Span 132 to Span 141. Otherwise, the crane barges have not been able get between the bridges to work on the steel spans and fender systems or east of Bents 147 to Bent 152 due to the shoaling.”

As of Oct. 9, some 54 barges of bridge debris have been dumped in artificial reefs. Hernandez estimates 20 barges remain to be deployed to two artificial reefs opposite Ocracoke Inlet (Reefs 250 and 255) and two opposite Beaufort Inlet (Reefs 320 and 340). Bonner Bridge demolition is about 82% completed.

Work is going forward on the portion of the Bonner Bridge that will remain at the south end of the new Oregon Inlet bridge. Crane barges are currently removing the catwalks from that portion.

The U.S. Coast Guard’s Aids to Navigation Team reported that buoys 13 and 16 are now back on station. Buoy 6 needs a new light and bracket.

Task Force member Russ King asked, on behalf of the Oregon Inlet Marina fleet, that the red buoy marking the Crack be moved west away from shoaling.

Tobin announced that a 2020 fiscal year report was promptly filed with the requisite authorities overseeing the dredge project. For the fiscal year ending June 30, 2020, $459,267.04 has been spent on design work, legal fees and some travel for the dredge commissioned by Dare County with EJE Dredging. Conrad Shipyard LLC of Morgan City, Louisiana will build the new dredge.

Tobin announced that a contract between EJE Dredging and Crowley Marine has been signed for construction supervision.

Some $36.2 million is available in the state’s shallow draft dredging fund, reported Tobin.

As to disposing of dredge spoil, the U.S. Army Corps of Engineers is requesting permission to deposit spoil in the Corps channel where depth is well beyond requirements, e.g. 24 feet.