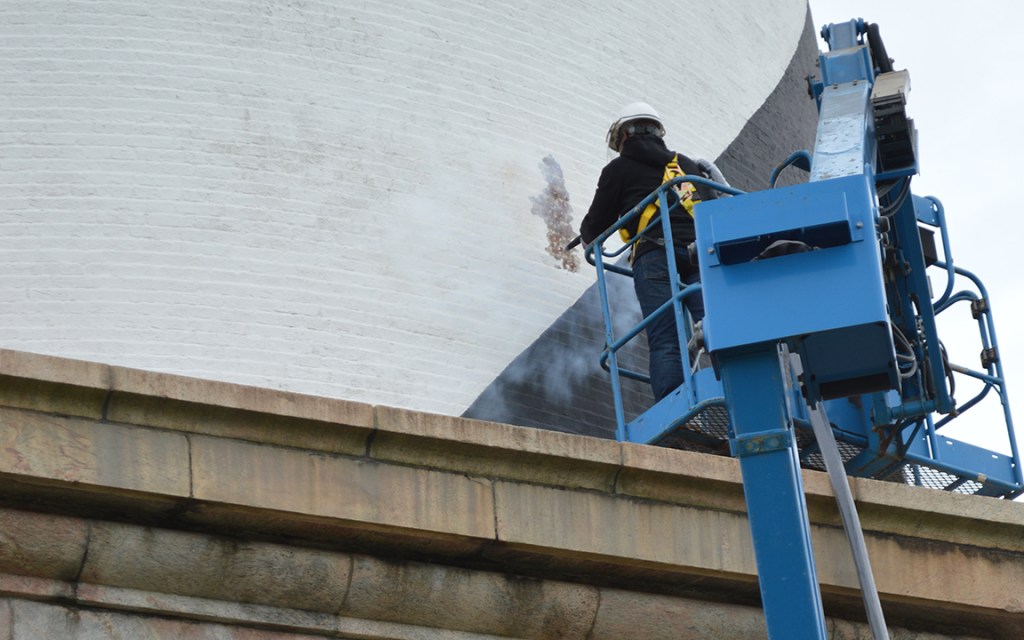 Sy Emilerius from St. Lucia Island blasts away what appears to be two layers of white paint from the Cape Hatteras Lighthouse. He is blasting dry ice pellets against the surface, a different way to remove paint that does not damage historic surfaces or leave a chemical residue. Mary Helen Goodloe-Murphy photo

The National Park Service is undertaking restoration of the historic Cape Hatteras Lighthouse.

Research about how to remove red, white and black paint from the 150-year old structure is underway with a demonstration of dry-ice removal.

The new method would replace chemical peeling or sand blasting, both of which leave residue or damage masonry. The dry-ice demonstration using a nozzle only produced large chips of white paint in what appeared to be two paint layers which were easily picked up. 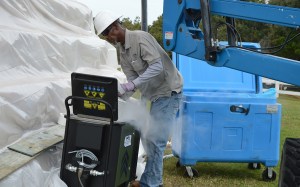 Transferring dry ice pellets to the “blast pot” is James Hawkins with HydroPrep of Newport News, Va., which set up the paint removal demonstration at the Cape Hatteras Lighthouse. Mary Helen Goodloe-Murphy photo

The park service aims to remove the lighthouse paint in order to solve a moisture problem. The supposition is that the layers of paint are trapping water. A modern “breathable” paint is suggested, along with fixing mortar inside and out. A moisture monitoring system has been installed in the air space between the outside and inside walls of the lighthouse to provide additional information.

On the outside of the lighthouse, 11,800 square feet of paint must be removed. On the inside, 5,700 square feet will be returned to the original surface.

HydroPrep in Newport News set up the dry-ice demonstration. A blue tote held 500 pounds of dry ice pellets which were transferred to the blast pot. From there, compressed air powered dry ice pellets through a nozzle to remove the paint. 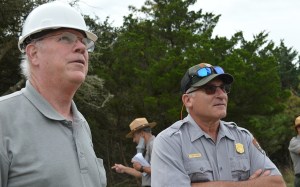 Looking at the dry ice blast demonstration are Rick Dupuy, president of HydroPrep, and John Kowlok, chief of maintenance for the Outer Banks Group of National Parks. The test was effective in removing all paint from a small area of the lighthouse. Mary Helen Goodloe-Murphy photo

“The dry ice blast testing was effective at removing paint from the exterior of the lighthouse,” says a statement issued by the Cape Hatteras National Seashore. “We are awaiting a report from the test to review and determine if this is the method we will use to remove the paint as phase one of the lighthouse project.”

In a National Park Service budget justification document, total project cost for the lighthouse restoration project is $22,847,000 of which $4.12 million has already been committed. Scheduled for fiscal year 2021 is $18.73 million.