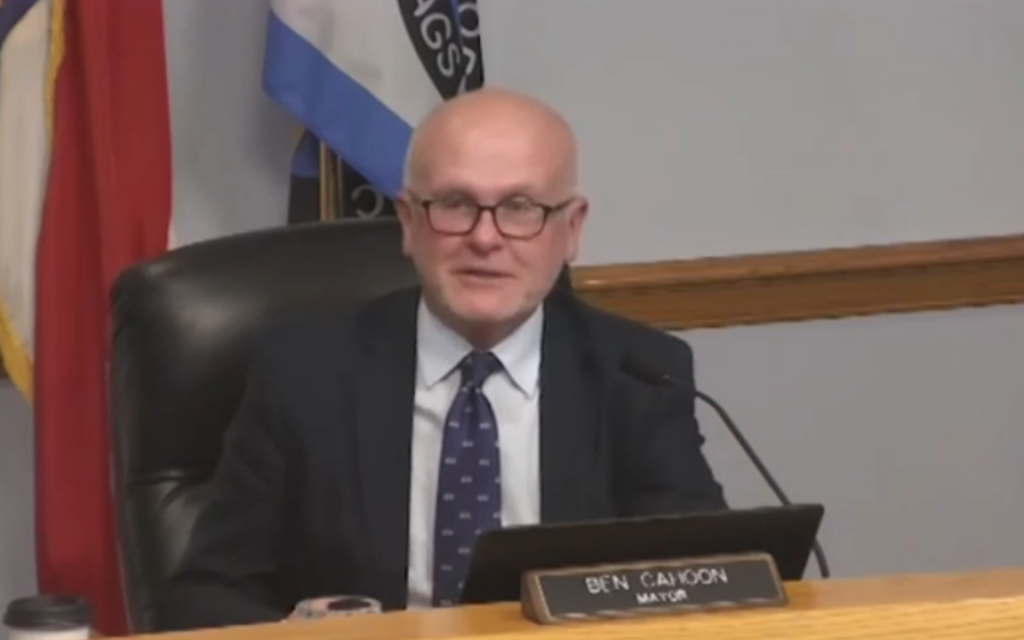 Nags Head Mayor Ben Cahoon led a discussion during November 4, 2020 Nags Head Board of Commissioners meeting on a resolution opposing installation of additional Dominion Energy power poles on US 158. Board members will look at the resolution again in December. Nags Head meeting screenshot

The meeting opened with an employee recognition session in which lifeguard Ethan White received a Lifesaving Award for helping avert a tragic outcome on October 13 when he helped rescue a woman struggling in a rip current near Jennette’s Pier.

White and supervisor Sarah Knie were on their last patrol of the day when they spotted a woman struggling in a rip current just north of Jennette’s Pier. White quickly entered the water, secured the woman and was able to bring her back through the rough surf, coaching her along the way when to hold her breath or breathe as they took waves over their heads. 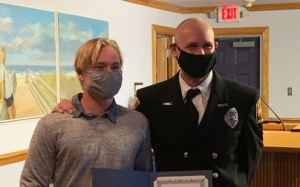 Faced with growing popularity and overcrowding of Jockey’s Ridge Estuarine Access, commissioners agreed to establish a committee of volunteers to investigate public safety on West Soundside Road and the use of the site with an update to the operation plan governing its use. 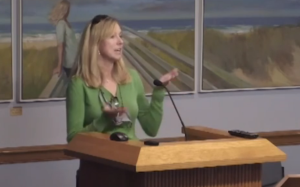 Karen M. Reeder spoke about the overcrowding at the Jockey’s Ridge Estuarine Access and the impact to her West Soundside Road home. Nags Head meeting screenshot

A brief history of the site indicates the idea for the access first originated in 1985. At the time, both state and town officials wanted to develop the site but the state was prohibited from directing any development, so the town leased four acres. There were 25 parking spaces with no other formal facilities there and both residents and visitors accessed the beach using an unimproved road near the current access. By agreement with park officials, Nags Head was responsible for maintenance.

According to Police Chief Phil Webster, complaints in past years about congestion at the site usually increased when ocean conditions were poor. That has not been the case this year.

In July, the soundside access accounted for almost one fourth of the park’s total visitation count with 17,362 cars entering the access at an average of 695 cars per day, or 63 cars each hour.

Also of concern is that the access entrance is located at a 90-degree curve on West Soundside Road.

During discussion, commissioner Web Fuller said the town has been derelict in its duties but that he thought the agreement had expired. He added that the site is overused and not meeting its original intent.

It appears a lease was approved in 2016 with automatic renewals unless one party declines.

Commissioner Renée Cahoon suggested a working group to look at the problem and Mayor Ben Cahoon agreed, suggesting the group consist of park Superintendent Joy Greenwood, a couple of commissioners and a representative from Planning and Public Safety and two residents. They could also listen to as many other people as deemed necessary.

The board voted to form a working group with a mix of volunteer members to be determined by the board at a later meeting.

In other business for the day, the board voted to include Basil R. Belsche, Dave Herrmann, Bob W. Muller and Bill Simmons on a Decentralized Wastewater Management Advisory Committee, to amend town code camping provisions to limit camping to seven consecutive days and up to 21 days in a calendar year with occupancy not to exceed the wastewater capacity of the property.

Fuller said his only concern was that the change allows kids to put up a tent and spend the night and that it prevents somebody from pulling up an RV and connecting it for the power and spending the night.

Michael Zehner, Planning and Development director, confirmed that it does both.

Commissioners also listened to a request from Derek and Kristi Stalling to permanently close a section of East Forrest Street in order to develop a lot at 6316 South Virginia Dare Trail. Corner lots require a greater setback, which limits the placement and square footage of any structure on a corner. While not in favor of abandoning the street, commissioners did advise they want to help and asked staff to review the situation for possible assistance in resolving the setback issue.

Commissioners also discussed the wording for a resolution opposing installation of additional Dominion Energy power poles on US 158 before ending the meeting with a closed session to discuss confidential matters with the town attorney.