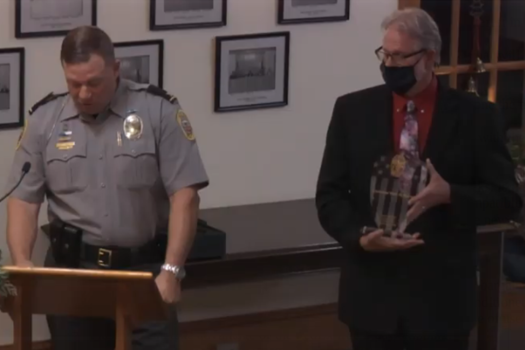 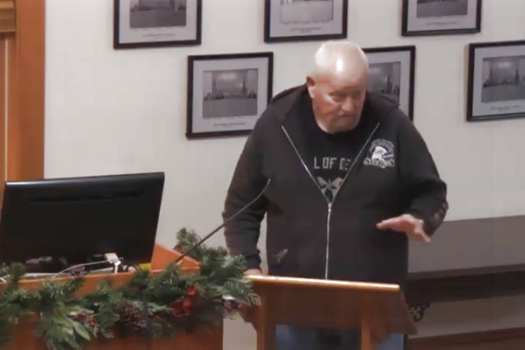 Terry Gray was at the December 7 Kitty Hawk Town Council meeting to present a plaque to Chief Joel Johnson for the police department's assistance with the Dare County Motorcycle – Jeep Toy Run. Gray said it was the fifth year for the Motorcycle Toy Run without an incident of any kind. Kitty Hawk meeting screenshot 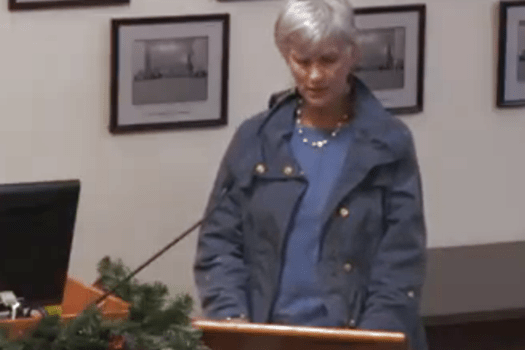 Much of the Monday, December 7, Kitty Hawk Town Council meeting focus was on the Police Department.

As soon as the meeting opened, Chief Joel Johnson led off with an introduction of two new officers: Caleb Macon and Tara Poulin.

After retiring at the end of September, Lieutenant Wade Styons was on hand for a brief recognition of his 21 years of service.

Johnson explained that Styons came to Kitty Hawk in 1999 after working in the Department of Corrections and Elizabeth City Police Department. He started in Kitty Hawk’s patrol division, became a detective in 2004, was promoted to sergeant in 2011, in 2013 to lieutenant and was second in command of the police department.

During his career, Styons also received a lifesaving award and Meritorious Service Medal for outstanding dedication and duty to service.

The next agenda item saw Terry Gray offer a word of thanks and make a plaque presentation to Johnson for Police Department’s assistance with the Dare County Motorcycle – Jeep Toy Run. Gray pointed out that this was the fifth year for the Motorcycle Toy Run without an incident of any kind. Even though COVID restrictions caused the group to fall short of the $50,000 goal, Gray said about $40,000 was raised and a contribution was made earlier in the day to Dare County to buy Christmas gifts for several local children.

It didn’t take long for the atmosphere inside to come close to matching the gloomy weather outside.

For the second month in a row, public speakers voiced complaints that the investigation of the death of Amanda LeeAnn Fletcher Hartleben was not handled properly.

On July 22, EMS was called to Hartleben’s West Kitty Hawk Road home where she was found bleeding and unresponsive. She died in a Virginia hospital three days later from complications of blunt force trauma to the head. Blood stains in several rooms and on different items around the house led members of Hartleben’s family to voice that they suspected foul play and insisted her boyfriend John Curtis Tolson was involved. Three months later, on Monday, October 26, Tolson was charged with one count of second degree murder and taken into custody for Hartleben’s death.

Claiming poor Police Department leadership has caused a loss of community confidence, Hartleben’s cousin Trisha Cahoon said there were many bad decisions on this case, that Johnson threw EMS under the bus in this case and he threw members of his department under the bus. She went on to say that there are several issues with the Kitty Hawk Police Department that need to be addressed and, without providing specific details, that she understood there are or there might be charges on the chief of police.

Brian Lee encouraged council members who have not heard any complaints to review a Facebook page with more than 3,100 members and added that if Johnson had any integrity he would resign.

When asked about elected council members pushing for employee dismissals, town attorney Casey C. Varnell advised that under the council-manager system set out in the town charter, full authority to hire and fire is solely with the manager. In those cases where elected officials might discuss a matter without pressure, the door is open for potential problems over who said what or what was actually meant by what was said.

“Under the scenario of forcing your will on a manager,” Varnell explained, “then you have exceeded your authority and all government immunity goes out the door.”

It was also pointed out that there is no place in local or state code that requires council to consult social media.

There was one speaker who offered comments in support for Johnson by phone, but when council advised they were not taking action to get involved, there were disgruntled comments from others in the room.

In other business for the evening, Teresa Osborne, CPA with Dowdy and Osborne, gave a fiscal year 2019-2020 audit report saying that the town earned an unmodified opinion, the best available, with no material deficiencies found. She added that although COVID played a big part in the town’s finances, overall revenues exceeded expenses by $638,000 due in part to some unbudgeted revenues including COVID relief and invested earnings.

Osborne added that even though all department expenses came in under budget and revenues increased, the unassigned fund balance went down $205,000 but the drop was basically a temporary reduction, primarily a timing difference for money transfer, and Kitty Hawk ended the year in a strong financial position.

Council also approved meeting minutes from October 9 and November 2, a Water Resources Development Grant resolution needed to receive $90,000 from the State of North Carolina to remove debris in the ditches and canals in town, authorized a $50 gift card for full and part time employees in lieu of an annual luncheon and door prizes, and directed the town manager to look at limiting temporary and event signs along the highway.