Last spring, when it became clear to the producers of The Lost Colony that the 2020 show, actually, would not go on, they saw an opportunity. An opportunity to remodel cast and crew housing at Morrison Grove on Roanoke Island just minutes from the outdoor arena.

Roanoke Island Historical Association (RIHA) Vice Chair Susan Fearing led the charge, coordinating the project with general contractor Tommy Twiddy of Ocean Builders to remodel 22 units across three buildings. “It wasn’t just a job for him. He brings not only expertise and knowledge, which are essential when updating apartment buildings like these, but he truly cares about the project,” Fearing said.

The remodeling began in May of 2020 and 12 units have been completely finished. This includes entirely new bathrooms, flooring, paint, lighting, kitchen cabinetry and countertops.

Longtime RIHA member Bettie Kellogg took an active role in fundraising. “We were very fortunate. I never got turned down in the community. I was pleasantly surprised at how the community stepped up to the plate,” she said.

Roanoke Island has a long history of investment and support of The Lost Colony. Before Morrison Grove was built, the Kellogg family, like many other families in Manteo, rented rooms to cast and crew members. “That’s what brought the community support and love of The Lost Colony,” she recalls. “My entire childhood, we would have cast members, the choir director, Indians, the organist in our home. They were so much a part of my family and continued to be. I remember we would have Sunday afternoon stand ups. My mom had one of those old upright pianos. We’d have singers, musicians and they’d just do jam sessions. Those were fun days!” she said. 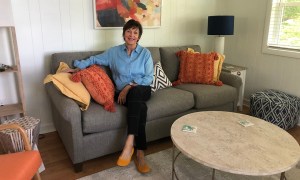 It’s no surprise then that business owners and individuals with such warm memories of The Lost Colony rallied together to support the remodeling of cast and crew housing. Charles Weathers, regional sales manager for Bassett Furniture, who provided all of the furniture for the new units at cost, said “Some of my first conscious memories and fondest memories of my life were spent going to the Outer Banks, being with the Fearing family and going to The Lost Colony every summer. It was very fulfilling for me to be able to give back to something that I loved that much in my youth.”

Many cast and crew members are currently housed in 21 of the 22 units at Morrison Grove. One particularly lovely unit, sponsored by Kellogg Supply Company and decorated by Bettie Kellogg with items from The Cottage Shop, is being rented through Airbnb for income. At the conclusion of The Lost Colony season, the plan is to rent all of the finished units through the fall and winter. Proceeds will go back into Morrison Grove for future repairs and maintenance including HVAC, new concrete and new parking. In September, work on the remaining units will resume.

And, according to Fearing, there is much work still to be completed and many needs to be met. RIHA is looking for businesses or individuals to become a “Keeper of the Dream” to sponsor the continuing work. Over a dozen businesses contributed to renovations: Bassett Furniture, Beach Box Builders, C&L Concrete Works, Cozy Kitchens, David Armstrong HVAC, Hatchell Concrete, Interiors by H&W, Island Woodcrafts, Kellogg Supply, Kempsville Building Materials, Lowe’s, Lumber Liquidators, Manteo Furniture, Noland Company, Ocean Builders, Pop-a-Lock and Sherwin Williams. According to the Lost Colony website (https://www.thelostcolony.org/morrison-grove/), there are several tiers of support: a unit remodel ($10,000), landscaping ($7,500), HVAC for a whole unit ($6,000), kitchen remodel ($5,000), bathroom remodel ($2,500), outdoor social area ($1,500) and outdoor shower ($500). But Fearing made it clear that RIHA appreciates “any kind of donation.”

Money has been tight for the producers, who went 19 months without a show. “We didn’t have any revenue coming out of the previous year,” said RIHA Chairman Kevin Bradley. “You start to run out of money. It’s the most difficult offseason we’ve had.” Fearing added, “Because of COVID-19, we cut our staff drastically; we went from seven to two. When the engine stops, it’s a lot to get it up and running,” she said.

Restarting the show for 2021 has involved hiring a new director and choreographer from Broadway, Jeff Whiting, as well as a new general manager, John Ancona, from Herschend Family Entertainment. But energy levels are high and preseason ticket sales are way up, according to Bradley. “We are up two to three times from where we were this time in 2019,” he said. Started in 1937, The Lost Colony is the longest running outdoor symphonic drama in the United States. The theater holds 1500 people and has been seen by millions of people.

There are challenges to producing the same show for 84 seasons. “It’s a little like the Titanic – people know the ending. We’ve had to reinvent ourselves this year, and we’ve had the time,” Bradley said. Even seasoned spectators are in for a treat this year with enhanced elements, some new stage designs and updated choreography.

Everyone associated with The Lost Colony has worked hard over the last year. Members of RIHA put in countless volunteer hours to maintain the legacy of the show for future generations by providing suitable and income-producing housing at Morrison Grove.

“This needs to be said – the community owes a debt of gratitude to the Fearing family,” stated Bradley. “They took something that was in really bad shape and renovated it into something we can be proud of.”

When asked what she loves about the play, Fearing’s answer could also mirror the community’s enthusiastic response to the Morrison Grove project: “I like the spirit it portrays, their determination, adventurousness, strength under hardship.”

For more information or questions about being a part of the Morrison Grove renovation project, call 252-473-2127.