Two men from Reston, Va. have been arrested after a vehicle pursuit that started in Nags Head and ended near The Lost Colony at the north end of Roanoke Island Wednesday night, June 16.

Dare County Central Communications received a report of a gray SUV driving recklessly and speeding down the center lane of South Croatan Highway in Kill Devil Hills. Nags Head law enforcement was notified of the vehicle driving south out of Kill Devil Hills, according to a press release from the Town of Nags Head.

Ryan Andrew Giebel, 18, was captured on radar by Nags Head police officers driving 76 mph in a 45 mph zone at about 11 p.m. Wednesday. The release stated that when officers attempted to stop the vehicle, Giebel continued speeding and Nags Head pursued the vehicle to the Lost Colony on Roanoke Island, where Giebel, and his passenger attempted to flee the scene on foot. “Aided by K-9 units from Nags Head and Dare County, both men were apprehended,” the release continued. 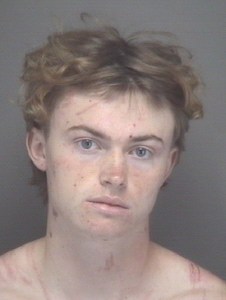 Giebel was charged with driving after consuming under 21, reckless driving to endanger, felony flee to elude, speeding, and resist, delay and obstruct. As of Thursday morning, he remains at the Dare County Detention Center with a $185,000 bond. He is scheduled for a first appearance in court Thursday, June 17, 2021.

The passenger was charged with resist, delay and obstruct and underage possession of alcohol. He was released on a $25,000 bond. [UPDATE: The passenger’s charges were later dismissed and on January 13, 2022 were expunged.]

“Nags Head’s Police Department would like to thank the Dare County Sheriff’s Office, Manteo Police Department, and Dare Med Flight for their assistance,” stated the release. “In addition, several community members provided information to authorities that helped in the successful apprehension of the men.”