Blackbeard’s Pirate Jamboree on Ocracoke set for Friday and Saturday 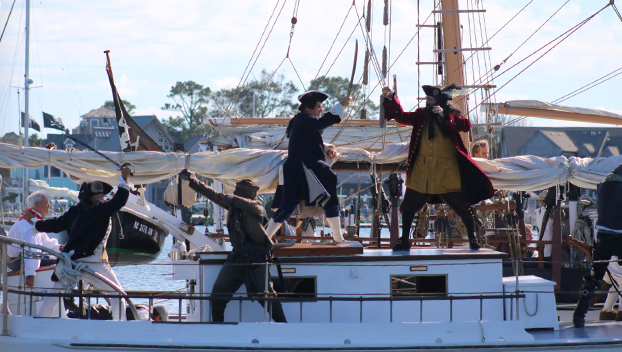 Ocracoke Island, like nearly everywhere else, is climbing out of the COVID-19 pandemic, but the island is also recovering from the flooding devastation from Hurricane Dorian in 2019.

So, Blackbeard’s Pirate Jamboree will go on Oct. 29 and 30 but will not be at the 2018 level, which was the 300th anniversary of Blackbeard’s demise.

This year, the festival will focus on history and colonial life and on family fun with the encampment and vendor fair centered on the Berkley Manor grounds.

Festival goers will be urged to eat and drink in any of Ocracoke’s many restaurants.

CDC guidelines regarding COVID-19 will apply.

All events are free and will kick off Friday evening in the Berkley Barn at 7 p.m. with a showing of the 1968 Disney film “Blackbeard’s Ghost,” a film for the whole family, followed by a discussion with historian Kevin Duffus about “Pirates and Fake News in 1718.”  The Motley Tones will entertain before the movie at 6:30 p.m.

Saturday, Oct. 30 will feature a colonial village on the grounds of the Berkley Manor along with artisan vendors from 9 a.m. to 5 p.m.

Other events will include a pirate ship invading Silver Lake and a three-ship “Battle of Ocracoke,” a pirate parade, sword-fight demonstrations, sea chanteys and several historical talks.

The event will conclude at 5 p.m. with a memorial service honoring the fallen sailors for both Blackbeard and Lt. Robert Maynard.

Among the living history re-enactors participating will be historian Kevin Duffus, with a new perspective on William Howard, the Cannon Crew, Leviathan Nautical Living History, Sinbad and the MEKA II, the Sword Circle, the Beaufort Oars, the Motley Tones, a Walking Blackbeard and Jimmy Bones.

Blackbeard’s Pirate Jamboree, produced by the Ocracoke Civic & Business Association, is made possible by a grant from the Ocracoke Occupancy Tax Board.

Stay tuned to www.VisitOcracokeVillage.com and its Facebook page in case of inclement weather. 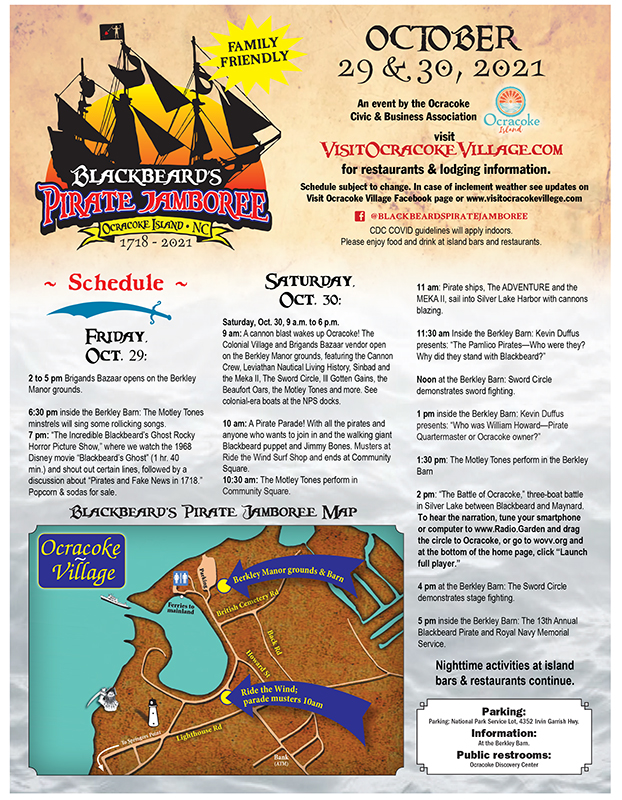