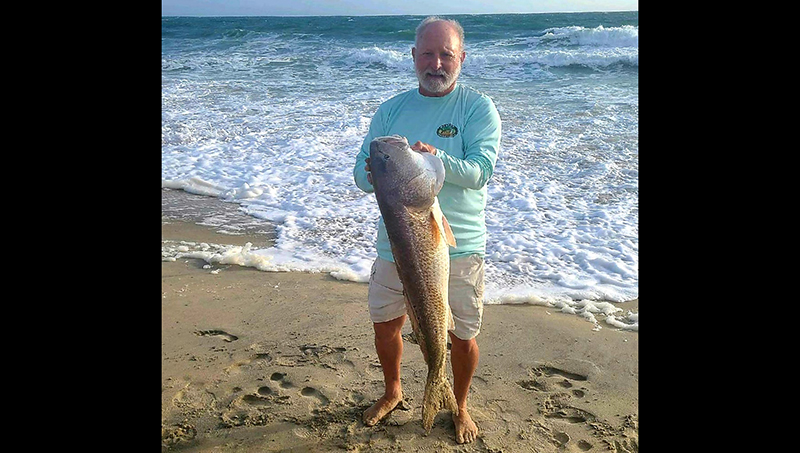 Gene Meacham holds up his big-time red drum, a 42-inch beauty that was measured, photographed and released back into the sea. Courtesy Jennette’s Pier

The Nags Head Surf Fishing Club’s 69th Annual Invitational Tournament returned to its roots this year by coming back to Jennette’s Pier as the headquarters for the three-day event for the first time since the early 1950s.

The weather and fishing were both decent for the tournament, which features 480 anglers on 80, six-person teams. The evening socials were toned down by club leaders because of COVID concerns, but the two days of fishing in the sun made up for it all. Anglers are encouraged to release their catches.

The tournament heated up big time for Gene Meacham of Kill Devil Hills and the Hot Liners of Nags Head when he hooked and landed a 42-inch red drum, something a little unusual for the event.

Red drum are the official state fish of North Carolina and are protected from overfishing by a management plan that only allows “slot” sized drum from 18 to 27 inches to be kept. All others must be released alive.

Meacham’s red drum catch and release was enough for his team to win overall first place. Meacham also cleaned up with three more firsts – largest fish, most points and session winner. He was thrilled with the prizes including a rod and reel, tackle bag, silver plate and big trophy, all awarded during Friday night’s award dinner in Oceanview Hall at Jennette’s Pier.

Just the other day, he sat down in his garage and told the epic tale of how he worked the hard-fighting fish from the sea to the beach at Forrest Street in Nags Head. It all happened Thursday morning, Oct. 7, early in the first session of four that make up the event. 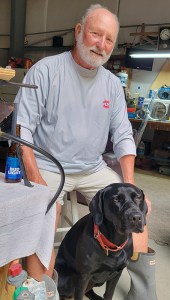 Gene Meacham and his dog Millie hang out in his garage on the westside of Kill Devil Hills. Courtesy Jennette’s Pier

“It was around eight o’clock,” Meacham said. “I had my 11-foot Diawa Interline with a Penn Fierce 5000, which is a small reel with 20-pound Power Pro line and a 30-pound shock leader.”

He was using a hand-tied “double drop loop rig with two, four-aught hooks,” he said. When Meacham later went to remove the hook from the drum’s mouth, he noticed half the rig was missing.

“He was hooked right in the corner of the mouth, he couldn’t have gotten away,” Meacham said.

But big fish do get away at times and the fact that the rig was broken in half and the five-ounce pyramid sinker was missing proves it can happen.

So, when the bite did come, first his line went slack.

“The fish went south through a vacant area (the beach ramp area),” Meacham explained. “The line went slack . . . I cranked the reel.”

Meacham said his mind raced to two likely candidates – a large skate or ray but he was soon pleasantly surprised.

The fish continued south into two more adjacent team stations. At one point, it found its way into an open area, Meacham said.

“It turned and I saw a big tail,” he said while putting his hands together in the shape of a large fish tail. Then, he said to himself: “’Oh I’ve got a fish!’”

That’s when his mind went into overdrive.

Meacham said he knew the tournament rules prevented anyone from helping him land the big fish, but other rules worked in his favor, such as the one that allows an angler to cross into another team’s area while hooked up.

“We went into another station, and they were good, they know what’s going on,” he said. So, with the big fish on the line and perhaps a first-place finish in the balance, Meacham kept it tight.

Next came the tricky business of getting the big red drum onto the beach. An avid angler, Meacham knew what to do. With each breaking wave he got the fish closer and closer to shore.

“One wave closer, second wave closer and the third wave, I surfed him right in!” Meacham said. “He was rolling around side to side, it was textbook!”

A crowd of people, six to eight strong, were following the action down the beach. They weren’t fishing themselves; just bystanders and beachgoers, Meacham said.

For whatever reason, the judges for his station were on foot and not driving so it took them a while to get there, he said. Their official measuring stick wasn’t long enough so Meacham had to go back to his Suburban and grab the inexpensive blue tape measure all tournament anglers were given.

He also grabbed his needle nose pliers and hurried back down the strand. Quite a feat for 70-year-old man who had just caught what ended up being the biggest fish in the event featuring 480 anglers.

The fish measured 43 inches and had a girth of 23 inches. After a quick photo by the judge, Meacham took the big red back into the swash.

“I did it!” he remembers saying.

After three tries to resuscitate the big animal, the happy fish story ended when the fish swam off. Between the fight and the jog up to the beach and back, he was jacked up.

“The adrenaline was pumping,” Meacham said. “We were just going, ’We won, we won!’”

His team quickly figured out the red drum was worth 76 points. With one fish, they were poised to win the tournament. “Then we were like, ‘Naw, one fish won’t win it,’” Meacham said.

They had a beer to celebrate the achievement, his first bull red drum in 65 years of fishing.

“It was a textbook landing of a fish,” Meacham said. “It just went smooth as silk!” 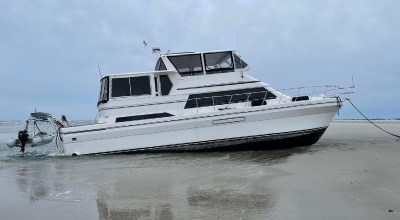 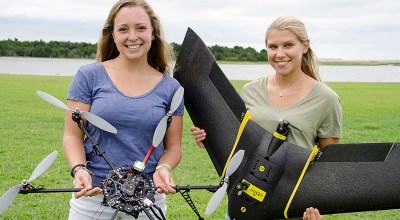