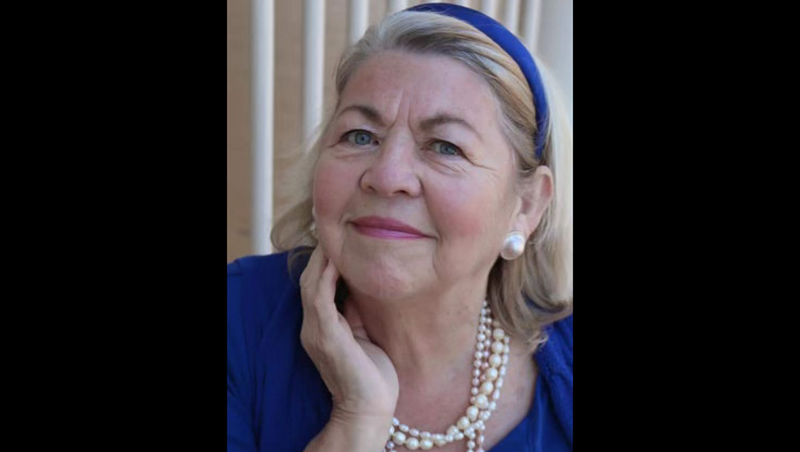 “You can remember me with a tear if you must … but I’d much prefer a smile.”

Manteo, NC – Beloved daughter of Cora Mae and Andrew Saint Clair Basnight of Manteo, NC, Della departed this world while shopping at The Fresh Market in Nags Head – an activity she dearly loved and for which she had cultivated a discerning eye for any potential bargain. Had she known the Lord was going to call her home, she would’ve most probably spent a bit more time on her hair and makeup. She was still most assuredly welcomed into the open arms of her Lord and Savior just as she was.

Della graduated from Manteo High school in 1962. She and her dearest childhood friend, Rachel Hayman, used to celebrate the arrival of the summer season on the Outer Banks with an annual swim around Jennette’s Pier in Nags Head.  One particular year, while heading back to shore, they noticed a group of people waving at them from the beach. Della and Rachel happily returned the exuberant waves. It was only after safely making it back to shore that they realized the people who had been waving were trying to warn them of a shark that was trailing a few yards behind the two swimmers.

Della attended East Carolina University, where she developed a serious crush on Paul Newman – an unrequited love that did not prevent her from passing out when she finally had the opportunity to meet him at a party.

After living for some time in New York, Della moved to California to pursue a career in marketing and theatre. Her occasional work in television included appearances in “Smokey And The Bandit,” as well as a guest-starring role in a double episode of the “Matlock” television series alongside her dear friend, Andy Griffith.

Returning to NC from the West Coast, Della lived in Raleigh, where she worked for Mutual Distributing Company and became internationally known and respected in the wine industry.

Finally retiring to her hometown of Manteo and receiving the Long Leaf Pine Award, Della became actively involved in numerous activities, including the Garden Club.  She was also a valued member of the Manteo Events Committee and served for years as emcee of the annual Manteo Christmas Parade.

Della also appeared in numerous stage productions during her theatrical career, including Theatre In The Park’s internationally renowned production of A Christmas Carol, in which she co-starred as Mrs. Cratchit. However, Della’s most indelible mark in live theatre will forever be her portrayal of Dame Coleman, the outspoken midwife in Paul Green’s Pulitzer-Prize-winning outdoor drama, The Lost Colony.  Although she had been a local member of the cast since her childhood, Broadway director Joe Layton first recognized that Della’s brilliant comedic timing combined with her colorful local accent made her a perfect match for the role. Her portrayal became one of the outstanding performances in the production, garnering praise from critics and audience members alike.

A renowned storyteller, Della – known affectionately as “Aunt Del” by most of the children on Roanoke Island – was a beloved fixture in her hometown and surrounding area during the last years of her life. Her laughter was always contagious, her wit razor-sharp, and her smile seemed as radiant as the summer sun. Never truly giving up her love of acting, Della, to the delight of area theatre-goers, would occasionally even rejoin the cast of The Lost Colony, revising her iconic portrayal of Dame Coleman.

Della’s many conversations with friends on the mainland and beyond would inevitably begin with the words, “Well, it’s another beautiful day on the Outer Banks!” She doted on her many nieces and nephews and was fiercely devoted to her family and friends, all of whom now believe she is enjoying a joyous heavenly reunion with her parents Cora Mae and Andrew Saint Clair Basnight, as well as her brother E.J. Alford, sister Sarah Owens, brother Marc Basnight, and niece, Lisa Hooper.

Service will be held graveside for family and friends at Manteo Cemetery on Wednesday, November 10, 2021, at 11 a.m.

In lieu of flowers, Della would most certainly want you to share a hug with those you love and perhaps make a donation to the Cora Mae Basnight Children’s Ministry at Mount Olivet Methodist Church, Manteo, NC.