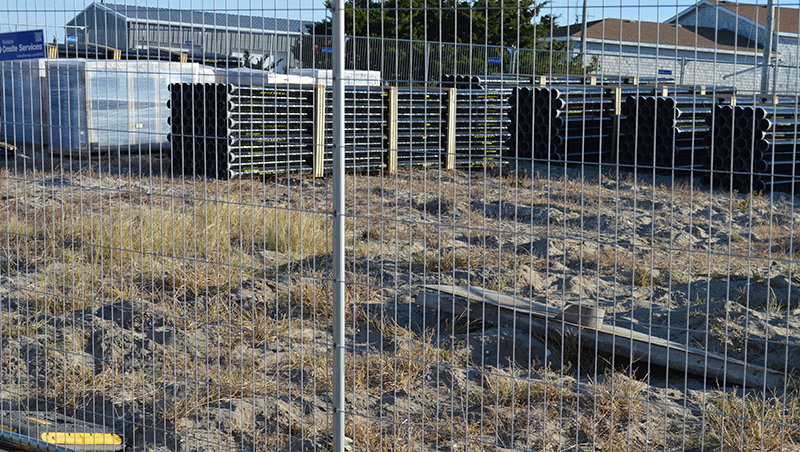 The Rodanthe Bridge is 95% completed.

Traffic is expected to shift sometime in February or March.

Massive infrastructure elements are in place: 108 bents are installed with 352 piles; 388 girders are set; 107 deck spans are cast.

On Dec. 6, Cape Hatteras Electric Cooperative’s contractor will start work on installing a hanger system and conduit under the bridge to carry electric power and fiber optic utilities.

Hooking the roadway to the almost completed bridge is proceeding at the south end with the building of the east side roundabout. At the north end, construction of the parking lot will start in early 2022.

At the line between Rodanthe and Pea Island National Wildlife Refuge, NCDOT applied to revise its permit for a variance for a modified cul-de-sac, to install sandbags running east to west and keep existing sandbags. The permit request was not approved by the Division of Coastal Management. The variance request is on the Coastal Resources Commission February 2022 agenda.

No parking is planned for the end of NC 12. The road between the refuge line and the roundabout has recently been paved. This remnant will be renamed a state route.

NCDOT will not maintain the beach or dune in case of a washout north of Rodanthe.

A Rodanthe Bridge 5K is being planned by the Rodanthe-Waves-Salvo Civic Association.

Asphalt that is pulled out of the refuge will be hauled to an asphalt plant to be recycled.

The life span of the bridge is 100 years.

No plans to extend the bridge further north exist at this time, however, Hernandez said the bridge is designed so it could be extended.

No lighting will be on the bridge. No cameras are slated for the bridge.

Rumble strips will be taken up.

No plan for sidewalks or crosswalk exist; however, the bridge has eight-foot shoulders, the same as the Marc Basnight Bridge, to accommodate bicyclists and pedestrians.

Markings on the bridge will be high tech, epoxy-based paint.

Duck blinds are a matter for the Dare County Game and Wildlife Commission.

The bridge is designed to withstand scour events and face storm wave action.