The U.S. Coast Guard said it has suspended its search for a missing kayaker along the North Carolina coast.

The maritime service said in a news release Saturday that rescue crews had searched an area of 268 square miles for about 24 hours.

The Coast Guard said that Warren Liner, 73, was reported missing in the area of Bogue Inlet, which is near Emerald Isle.

“Tonight’s decision to suspend the search for Mr. Liner was tough,” Coast Guard Capt. Matt Baer said in a statement. “Our crews and the crews of our state and local partners did their best to find him, and we will keep his family in our thoughts.”

The search for Liner began Friday after an Onslow County dispatcher received a call from the man’s wife that he had not returned from a kayaking trip.

The Coast Guard deployed a helicopter and three boats to search for him. They were assisted by Hammocks Beach State Park rangers as well as officials from nearby counties and municipalities. 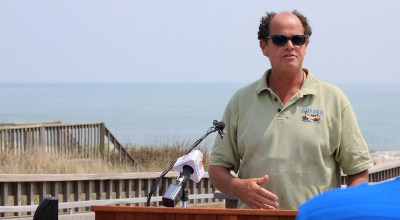 Commercial ocean harvest of flounder open for month of…