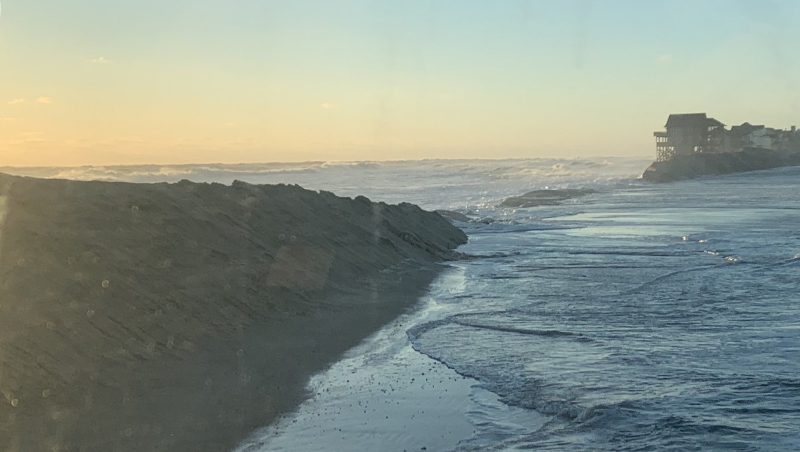 The National Weather Service warned the Outer Banks about the approaching storm, the first of 2022. The weather service called the unsettling storm, “a complex low pressure system.”

Initially, the storm impacts were to hit the Outer Banks on Sunday. The arrival was delayed.

The weather service placed three advisories on the Outer Banks.

The wind changed around noon on Monday, first to the west then to the northwest or north northwest. That wind change sent Pamlico Sound water into Hatteras, Frisco and Avon villages and onto NC 12.

A coastal flood advisory was posted for Monday morning continuing through mid-morning Tuesday. Both ocean and sound sides of Hatteras Island were affected with coastal flooding.

By 4:30 p.m. on Monday, Dare County Sheriff’s Office deputies working on Hatteras Island reported the following NC 12 road conditions: just north of Avon, two inches of water on the roadway; four to five inches of water near Conner’s in Buxton; 8 to 10 inches of water near the Frisco pier; six to eight inches for most of Hatteras village with the exception of the area near the Hatterasman, where water was up to 12 inches.

The weather service also had a high surf advisory in place. The service estimated that waves up to 12 feet would hit the beaches.

At the north end of Buxton, NC 12 was closed mid-morning as ocean water gushed across NC 12. Three vehicles were stuck in the roadway.

Dare County’s Emergency Operations Center was without Dominion Power from 9:44 a.m. to 7:45 p.m. The center was powered by a back-up generator. The Dare County Airport and North Carolina Aquarium also lost power. Crews were still working in the area on Tuesday afternoon.

The Cape Hatteras Electric Cooperative did not lose a circuit during the storm.