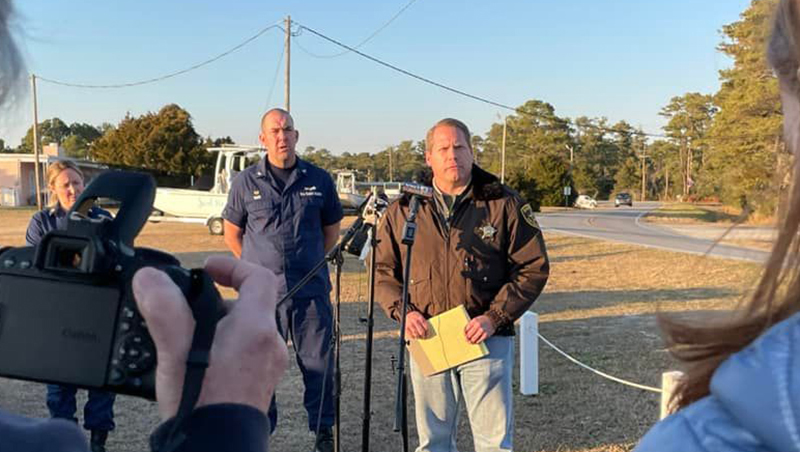 A small plane carrying eight people crashed into the ocean off the southern Outer Banks and left behind multiple debris fields where crews searched for the missing passengers, the Coast Guard said.

One body has so far been recovered and identified, Carteret County Sheriff Asa Buck told reporters Monday afternoon. He declined to release that person’s name or details about the other people who were on board, including their ages, “out of respect for the families.”

“We have no indication that anyone survived the crash,” the sheriff said.

Search crews are still looking for the main body of the plane but have identified three debris fields, which had been moving farther off shore into the Atlantic Ocean, Buck said.

U.S. Coast Guard Capt. Matthew J. Baer told reporters that multiple vessels from various agencies are continuing the search. In a tweet Monday night, the Coast Guard said a cutter would remain on the scene overnight.

“We’ve got an all-hands-on-deck event going on here,” Baer said. “And we want the citizens of Carteret County and eastern North Carolina to know that your Coast Guard is out there doing our absolute best alongside our partners.”

Most of the family members of the plane’s passengers live in Carteret, a coastal county of nearly 70,000 people, Buck said. The county includes communities such as Emerald Isle and Atlantic Beach as well as the Cape Lookout National Seashore and its iconic lighthouse, which has a black-and-white diamond pattern.

“We’ve been in very close contact with the family members,” the sheriff said.

The Coast Guard said in a news release that it received a report of a possible downed aircraft about 4 miles (6.4 kilometers) east of Drum Inlet from a Marine Corps Air Station Cherry Point air traffic controller Sunday. The air traffic controller reported that the aircraft was behaving erratically on radar, then disappeared from the screen.

The single-engine Pilatus PC-12/47 crashed into the water approximately 18 miles (29 kilometers) northeast of Michael J. Smith Field in Beaufort, North Carolina, about 2 p.m. local time Sunday, according to an email from the Federal Aviation Administration. A preliminary accident notification on the FAA’s website noted that the aircraft “crashed into water under unknown circumstances.”

FlightAware listed a departure for that plane from Hyde County Airport at 1:35 p.m. Sunday and noted it was last seen near Beaufort at 2:01 p.m.

“Our prayers and deep concerns go to the families and loved ones of the passengers,” North Carolina Gov. Roy Cooper tweeted Monday afternoon. “We’re grateful for the people in our state and local agencies who are supporting the efforts of the Coast Guard and other first responders.”

The National Transportation Safety Board tweeted Monday that it is investigating the crash.