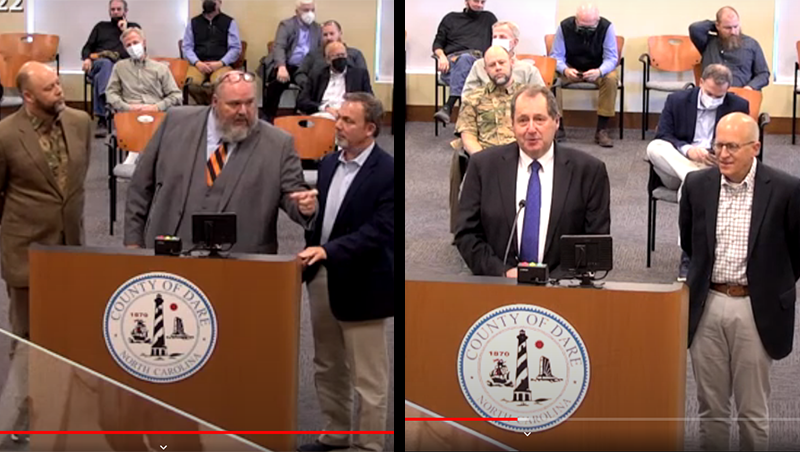 The Dare County Board of Commissioners gathered Thursday, Feb. 17, 2022 in a special session to discuss affordable housing.

The board heard from its Capital Improvements Planning Committee about two corporate candidates which want to build affordable housing in Dare County using $35 million provided by the General Assembly.

On Feb. 17, county manager Robert L. Outten listed the options for the board: make a decision today as the meeting notice indicated action could be taken; make a decision on Tuesday at the regularly scheduled board meeting (the item is already on the published agenda); invite candidates to make presentations to the entire board; submit questions to the candidates.

At the end of the meeting, the commissioners delayed the decision until Tuesday, Feb. 22.

Ross had questions: Why is Coastal not pursuing the low income tax credit program? What is the corporate structure?

Commissioner Steve House, who was attending the meeting by phone, asked Woda Cooper about delays on a project in Rocky Mount and a lawsuit filed by the company.

The two candidates are structured differently.

Coastal Affordable Housing, LLC was incorporated in North Carolina Nov. 9, 2021. It is a North Carolina-based business consortium, with its architect and contractor and others as principals in the project.

Attending the commissioners meeting for Coastal were Thomas, Ferris, Warren and Johnson.

Woda Cooper Companies, Inc. includes businesses that develop, construct and manage affordable housing communities. It is employee-owned and vertically integrated. The companies are named Woda Cooper Development Inc., Woda Construction, Inc. and Woda Management and Real Estate, LLC, all of which are headquartered in Columbus, Ohio.

Attending the commissioners meeting were Blackburne, Anlauf and David Cooper, a principal in Woda Cooper.

Both candidates have experience in building multi-story affordable housing types including garden apartments, walk-ups and corridor projects. At the committee meeting, both candidates provided numerous examples of completed housing projects.

Both candidates have experience building in North Carolina.

Both candidates work with communities.

Coastal stressed its principals and corporate participants are North Carolina-based and promised to deliver 400 units by Summer 2023. Its presentation theme is “we are problem solvers.” Coastal said at the commissioners meeting that they had a property under contract.

Woda Cooper emphasized it likes to create quality workforce housing and to stay with a project for the long haul with a management team for each property. Woda Cooper talked about financing, including using its own money. It already has a site under contract in Nags Head.

Woda Cooper estimated six months for permits and a year to build.

Toward the end of its committee presentation and as announced, Coastal asked for a closed session to discuss its ideas for financing and site selection.

In response to commissioner questions, Coastal Affordable Housing representatives said that a separate corporate entity would be created for each project. Principals in the entity would vary depending on the type of financing, particularly if the low income tax credit program was used. In response to an Outten question, Warren replied that he anticipates a master agreement.

Woda representative Blackburne talked about the Woda request for extension in the Rocky Mount project, which is managed by Development Finance Initiative, the same organization helping Dare County. Funding came through the North Carolina Office of Recovery and Resilience. An intergovernmental loan agreement had to be worked out. The site was previously a dry cleaning location and a NEPA environmental review was required.

Blackburne said the permits for the project are ready for pick up and construction is slated to start next month.

Cooper addressed the lawsuit against the Town of Warner Robbins, Ga., characterizing the situation that Woda confronted as “political infighting.” The city’s development council wanted to redevelop the downtown area. Woda developed a plan. The city council voted 4 to 2 in favor of the Woda project, which the mayor didn’t like.

Woda’s Blackburne with check in hand went to pick up permits but the mayor had instructed the staff not to issue the permits. An election happened. The city council changed. Another election was held and the mayor was voted out of office.

Woda Cooper has a lawsuit pending against the city. Cooper said the corporation will be meeting with the city March 1 and the lawsuit was about recovering the over $1 million invested in the project or moving forward with housing.

Outten warned the commissioners that financing, number of units and income brackets will all be decided during contract negotiations.

Commissioner Ervin Bateman was not able to attend the Thursday, Feb. 17 meeting.