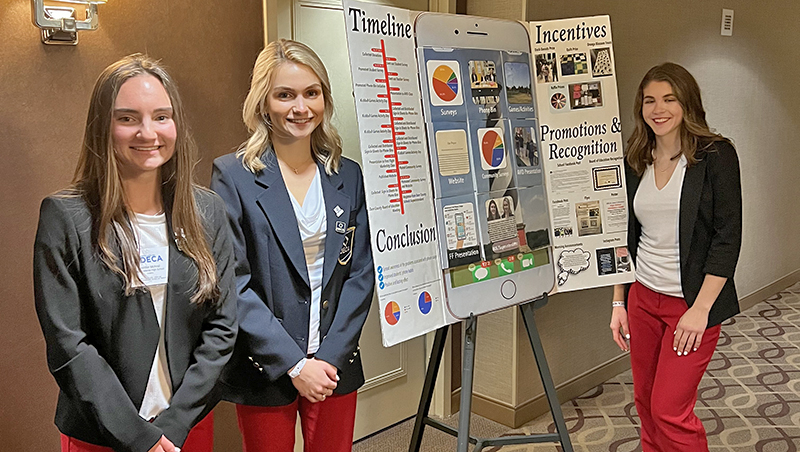 DECA winners in state competition, from left, Cape Hatteras Secondary students Jennifer Mohnal, Chloe Flythe and Elizabeth Muller stand by a display about the community awareness project “Lose The Phone Get Your Head In The Zone.” The trio is headed to the 2022 DECA International Career Development Conference in Atlanta in April. Cape Hatteras Secondary photo

A trio of Cape Hatteras Secondary students are on the way to International DECA competition.

The 2022 DECA International Career Development Conference and competition is scheduled for April 23 through 26 at the Georgia World Congress Center in Atlanta, Ga.

The team’s winning project titled “Lose The Phone Get Your Head In The Zone” aims to reduce teenage phone usage, especially during school.

The team designed a bin system where students chose to “park their phones” and win a chance for a prize donated by 15 Hatteras Island businesses. The team organized activity days where students played various sports. The project also involved a survey.

The project was presented at the Feb. 8 Dare County School Board meeting.

At that same school board meeting, Cape Hatteras Secondary staff and student accomplishments were noted.

Natasha Farrow is the Cape Hatteras Secondary Teacher of the Year. She has been a member of the faculty since 2011. Since 2014, she has taught math.

For 14 years, Phyllis Spruill has welcomed folks first to the guidance office and now as the school’s receptionist. She is the Classified Employee of the Year. “Ms. Phyllis runs our office with ease and knows exactly what is going on in the building at all times,” said Cape Hatteras Secondary Principal Beth Rooks. 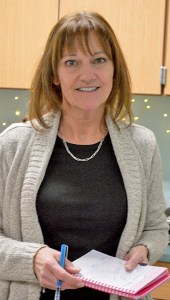 Clay Tiderman has taught middle and high school science since 2017. He sponsors the school’s fish hatchery, surf club and the ocean science class. He was recently accepted into the Principal Preparation Program through North Carolina State University.

Auditioning and earning a seat in the North Carolina Eastern Regional Honors Band this year are Clara Oden on flute, Elizabeth Muller on clarinet, Rylee Oberbeck on French Horn, Max Syrrist on baritone and Cody Bayne on mallets.

At the State DECA completion, Audrey Kramer was named a top 10 finalist in the Entrepreneurship Category.

Kimber Balance, Emma Riggs, Jose Briones Avila, Lydia Hooper, Madison Morrell and Isabella Helig received a proficiency rating in the Coastal Division. This is recognition of the combination scores of role plays and exam scores on their respective events.

DECA is a co-curricular program at Cape Hatteras Secondary School.