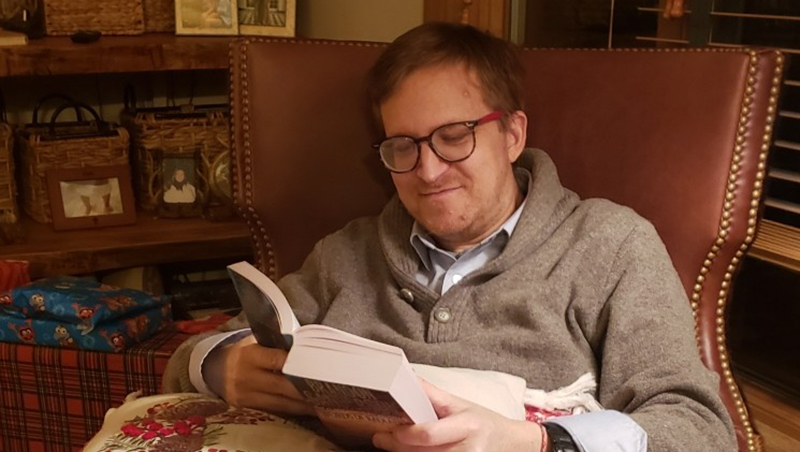 Nicolas Donald Gullett, age 44, passed peacefully surrounded by family after a hard-fought battle with glioblastoma. Nicolas was a son, brother, uncle, juris doctor, world traveler, taco/hot dog connoisseur, and beyond anything else a loving and selfless person. Despite being born with NF1 and overcoming childhood cancer, Nic remained ever optimistic and embraced the idea of charity, including working as a counselor at Paul Newman’s Hole in the Wall Gang camp for terminally ill children that he attended as a child as well at orphanages in Russia and Nepal. Nicolas traveled the world and captured his adventures in many amazing photographs and honed his skills working as a photographer for both UNC and NC State. Nicolas was a voracious reader and consumer of pop culture and loved nothing more than sharing his best discoveries with those around him. As the oldest of four children, Nicolas did his utmost to help each sibling in any way he could, whether offering a specially cooked meal or volunteering to help resolve a matter troubling someone. Nic was always ready to reach out and support others both within and outside his family. Nic’s overwhelming kindness and empathy left many around him forever changed. Although Nic has left us, those he touched will never forget how much love and beauty he brought to this world.

Nicolas was born in Amarillo, Texas on May 20, 1977. Nicolas graduated from Broughton High School in Raleigh, NC in 1996 then went on to graduate from the University of North Carolina at Chapel Hill in 2008 with a degree in International Relations and a minor in Russian. Nicolas then graduated from Florida Coastal School of Law in Jacksonville, FL in 2013.

Nicolas was a lifelong student, but both his passion and his dedication to learning peaked during his three years as a law school student and honored graduate summarized below from his law school peers and professors.

“Nic was a member of the Moot Court Honor Board while he was a student at Florida Coastal School of Law. He was tremendously respected by the members of the Honor Board for his abilities and for his selfless and genuine contribution to the other members of the Board. During his time on the Honor Board, the program ranked among the best in the nation, ultimately becoming the first in the country above all other law schools, a reflection of his contribution. His individual results were among the best in the history of the Honor Board. Nic was selected to compete in some of the most prestigious and competitive competitions in the country because of his talent, work ethic, and tireless support of his fellow moot court members.”

Nicolas lived a wondrous life full of adventures and spectacular feats, much like the motto of Life Magazine and the film The Secret Life of Walter Mitty: “To see the world, things dangerous to come to, to see behind walls, draw closer, to find each other, and to feel. That is the purpose of life.” Below is a list of some of the accolades Nicolas garnered highlighting a bit of what made Nicolas and his journey so unforgettable.

– Taught English in Hangzhou, China to kindergarteners and professionals for one year

– Beanie baby swindler and flea market hustler: once traded a Furby for a Dalmatian puppy

And many more amazing achievements that culminated in the Nicolas we know and love.

In lieu of flowers, donations may be made in Nicolas’ memory to the following organizations. Please include “in memory of Nicolas Gullett” for any donations.

S.E.C.U. Family House, an organization that provides a safe, nurturing, affordable home for patients and their loved ones who travel great distances to UNC Hospitals for life-saving procedures and serious illnesses.