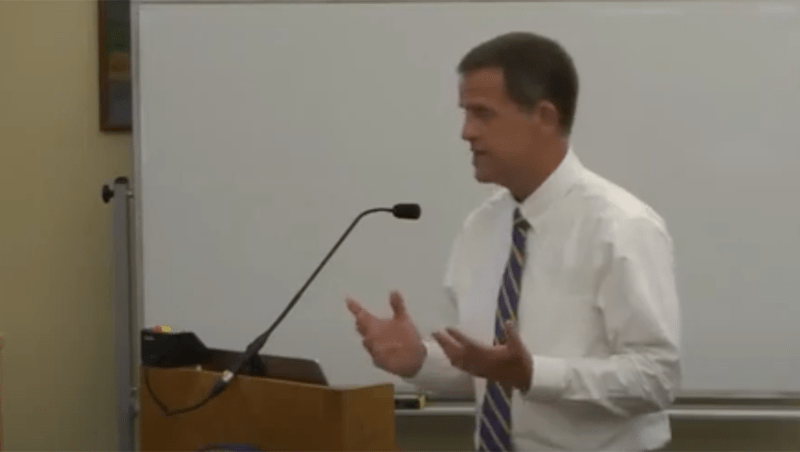 The Southern Shores Town Council discussed a proposed traffic mitigation plan at the May 3 regular meeting.

Town manager Cliff Ogburn presented three options for the coming summer traffic, which lines up throughout town on Saturdays and Sundays from May through October, primarily for travelers headed to Corolla. With the advent of smartphone apps like Waze, vacation-goers seek shortcuts around NC 12 and Hwy 158, clogging up residential streets.

Council members requested community input, particularly from homeowners on Hickory and Ocean Blvd., before moving ahead with road closures or barricades. Creating “cul-de-sacs can and may reduce police and EMS response time but at the same time they understand the need to mitigate some of the traffic,” said Ogburn.

All agree that the best traffic solution is a mid-Currituck bridge that would eliminate the cut through traffic in towns like Southern Shores and Duck.

Town attorney Ben Gallop updated the board on the status of the bridge project, which has been discussed for many years, but opposed by certain community and environmental groups. He says the town is “moving forward” with their support of the bridge.

NCDOT and the Federal Highway Administration have obtained another 30-day extension, thereby giving the town until June 13 to prepare an amicus brief supporting the case and have it filed.

Many Dare County towns have signed a resolution in support of a bridge, as well as Chowan, Currituck and Camden counties. “That’s four out of the ten northeast counties through North Carolina so I think that’s pretty powerful,” said council member Paula Sherlock.

Because of the state of the economy, Southern Shores’ budget has been impacted both positively and negatively, Ogburn said. Leisure and hospitality services have seen the greatest jobs increase, while COVID-19, the war in Ukraine and the sanctions against Russia, the consumer price index and interest rates have had an impact on this year’s budget.

“. . . It will remain to be seen how inflation will impact consumer and visitor spending as all indications point to above normal occupancy and sales tax revenues this year,” Ogburn said.

The General Fund budget totals $8,706,138, a decrease of $115,052. The budget shows a shortfall of $312,671, for which Obgurn recommended an appropriation from the town’s unassigned fund balance, rather than an increase in property taxes. The budget also recommends no change in the tax rates already established for the beach nourishment fund.

Southern Shores received $942,717 in coronavirus state and local fiscal recovery funds, half of which was distributed in July 2021. The other half is expected this July. Said Ogburn, “Initially the guidance [from the federal government] was that we would have to use these funds for designated purposes but that final rule . . . allows us to claim this as part of lost revenue even though the town did not realize lost revenue. So those funds will be placed in a special revenue fund we will use them to supplant police salaries and benefits, and then those funds will be available for capital improvement project.”

Council members will hold a budget workshop on May 17. The community is invited to share opinions at a public feedback meeting on June 7, immediately after which the budget may be approved.