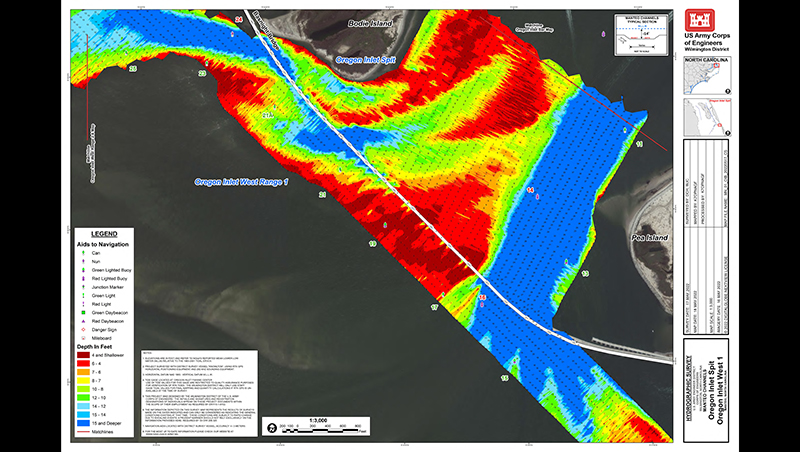 Oregon Inlet survey made on May 17. Courtesy U.S. Army Corps of Engineers

A May 17 Corps survey shows water depth of two to three feet between Buoys 17 and 21 at mean low water.

The survey was conducted in response to the intense nor’easter that impacted the Outer Banks during week of May 8.

The Corps announcement indicates that the “shallow depths of the current channel will not permit use of the USACE Shallow Draft Fleet dredges to clear the channel.”

The information released by the Corps states “the current channel markers will be removed in the coming days.”

The May 20 bulletin continues: “The Coast Guard is not closing or otherwise restricting the waterway. Boaters choosing to transit through this channel do so at their own risk and should use extreme caution,” states the U.S. Coast Guard.

“The Coast Guard and U.S. Army Corps of Engineers are currently coordinating and actively investigating other potential areas where a marked channel can be established to provide access to and from Oregon Inlet.”

Additionally, the marked channel at the Oregon Inlet bar is showing signs of shoaling. Water depth is four to five feet.

In Hatteras Inlet, the Hatteras Connector held up well during the May 8-12 nor’easter.