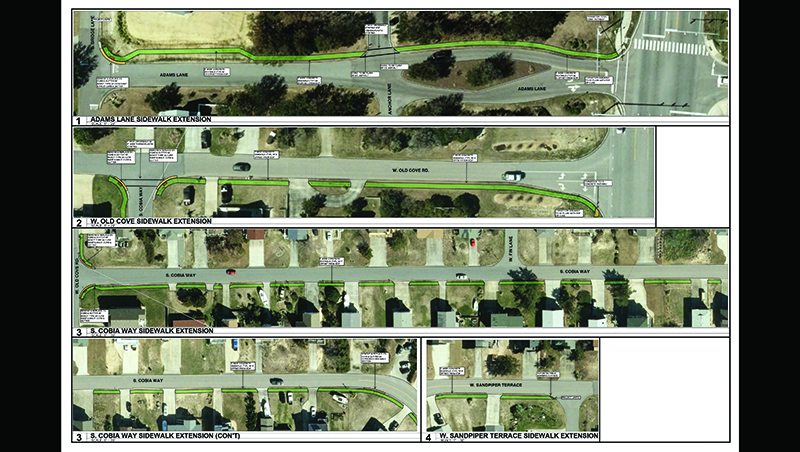 Nags Head will be starting two concrete sidewalk extension projects in Nags Head Acres and Old Nags Head Cove subdivisions ahead of the paving and drainage work planned for those areas.

The first project in Nags Head Acres will be on Adams Lane, from Highway 158 to South Bridge Lane.

The bid was awarded to Hatchell Concrete, Inc. at a price of $186,299. The Nags Head Board of Commissioners approved the project, along with an additional 10% contingency, for a total of $205,000.

Though the sidewalks were not originally planned in the year’s budget, commissioners requested that town manager Andy Garman look into the possibility before water line improvements, drainage and paving work was started. Both projects are expected to be finished in the next several weeks.

A map of the projects can be seen online at nagsheadnc.gov/AgendaCenter/ViewFile/Item/4069?fileID=6340.

At Soundside Road, the town is planning speed mitigation efforts after many residents spoke at the April 6 commissioners’ meeting asking for help with traffic from people visiting the Jockey’s Ridge soundside beach. Garman said there are plans to add speed cushions – distinct from speed bumps – along Soundside Road. The low profile speed cushions are about seven feet long and three inches high and are removable if the town wants to move them to a different location.

Also planned for the area are two radar speed limit signs to alert drivers of their speed along the residential road.

Said Mayor Ben Cahoon, “I think it’s a good experiment. We’ll see if we can get a handle on the speed issue with these.”

Included in the budget request were additional speed cushions and associated set ups, and two more radar speed limit signs to place at the Whalebone junction area for the summer season. The total budget request for $28,356 was approved.

A big change coming to all west side Nags neighborhoods is a speed reduction from 25 mph down to 20 mph. Following a request from the residents of the Village at Nags Head to lower the speed limit, staff began looking into safety statistics for pedestrians, as all Nags Head neighborhoods experience heavy foot and bicycle traffic.

All new signage is expected to be in place by June 1.

Commissioners adopted an updated and GIS-digitized traffic control map to replace the paper copy that town staff has been manually updated for many years. “This new version is a result of a concerted effort by the Town Clerk’s Office, staff members, and police officers who have all provided valuable input. The map will provide a baseline digital version that can easily be updated,” said Garman’s agenda item summary.