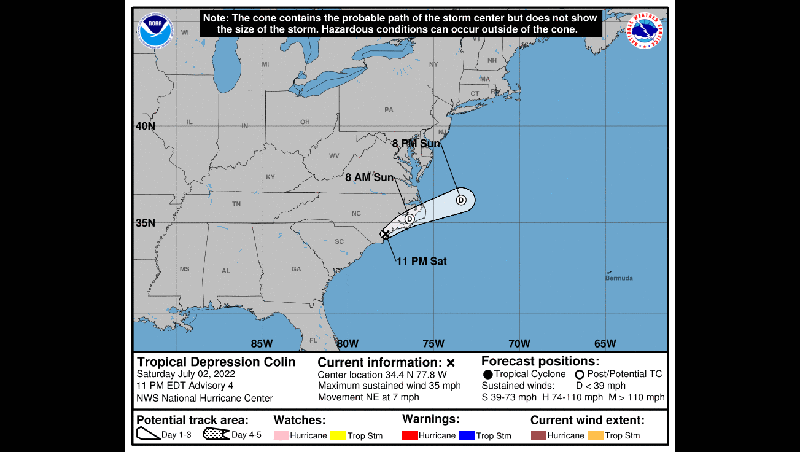 The NOAA National Hurricane Center has announced in its 11 p.m. update Saturday that Colin, formerly a tropical storm, has weakened and is now a tropical depression.

The Tropical Storm Warnings for the North Carolina coast and the Pamlico Sound have been discontinued.

“At 1100 PM EDT (0300 UTC), the center of Tropical Depression Colin was located near latitude 34.4 North, longitude 77.8 West. The depression is moving toward the northeast near 7 mph (11 km/h),” stated the bulletin. “A slightly faster northeast to east-northeast motion is expected during the next day or so. On the forecast track, the center of Colin or [its] remnants is expected to move northeastward along or just inland of the North Carolina coast through Sunday afternoon.”

Maximum sustained winds have decreased to near 35 mph (55 km/h) with higher gusts. Additional weakening is likely and Colin is expected to degenerate to a remnant area of low pressure later Saturday night or on Sunday, according to the bulletin.

The system is expected to dissipate completely Sunday night or Monday.

Swells generated by Colin are affecting portions of the North Carolina coast and could cause life-threatening surf and rip current conditions.

The National Weather Service is warning that dangerous rip currents and strong longshore currents in the surf zone will be present Sunday on Ocracoke Island and Hatteras Island beaches. The most likely time for strong rip currents to occur is a couple of hours either side of low tide, which will occur around 5 p.m. Sunday.