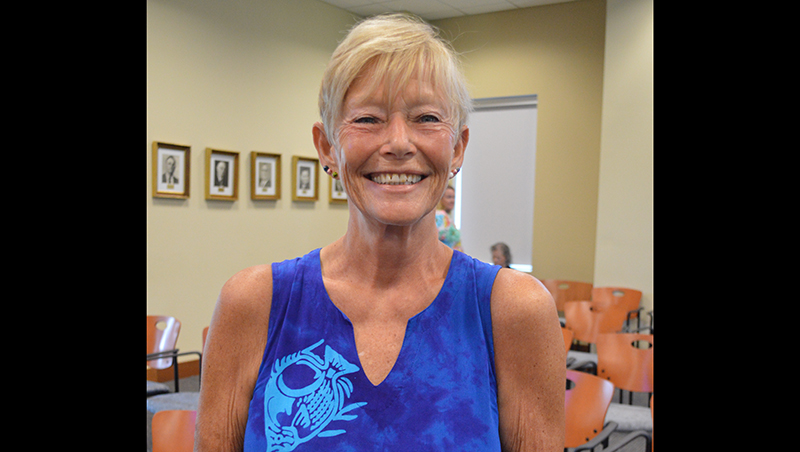 Laurie Amatucci, president of the Outer Banks SPCA, called for an emergency program to deal with feral cats. On Monday, Aug. 1, county commissioners agreed to contribute up to $70,000 while the Outer Banks SPCA gives $30,000 to trap, neuter and release up to 1,000 cats in order to control feral cat population numbers. M.H. Goodloe-Murphy photo

On Monday, August 1, 2022, Dare commissioners were told the feral cat population in the county is about to explode.

Because of that impending explosive increase, Outer Banks SPCA president Laurie Amatucci asked for an emergency measure to launch a campaign to trap, neuter and release up to 1,000 feral cats.

Here and across the country, neutering numbers declined during the pandemic, exaggerating population growth.

During public comment, Amatucci together with executive director Bill Coleman answered numerous questions from the commissioners.

Woodard called the proposed program “a band-aid. I want something that will last long-term.”

Amatucci responded, “This is not a band-aid. This is a solution.”

Coleman reported that four or five veterinarians are lined up to handle cats that are not spayed or neutered and to administer rabies shots.

Board Vice Chairman Wally Overman wanted to know how feral cats sustain themselves.

Amatucci responded that released cats have caretakers. The cats also congregate around dumpsters and garbage cans and in back of restaurants.

Commissioner Danny Couch alluded to “rogue” people who do not participate in these programs. He also reported that property management companies have guests complaining all the time about the cats.

Woodard said that feeding the cats under vacant cottages needs to stop.

Also calling for an emergency response was Linda Ledwith from Nags Head.

The commissioners responded toward the end of the meeting.

Commissioner Rob Ross moved to commit up to $70,000 to the feral cat campaign that is to be overseen and managed by the county’s finance department. The Outer Banks SPCA has committed $30,000 to the project.

The Outer Banks SPCA will work with Dare County’s incorporated towns and in unincorporated areas during the campaign.