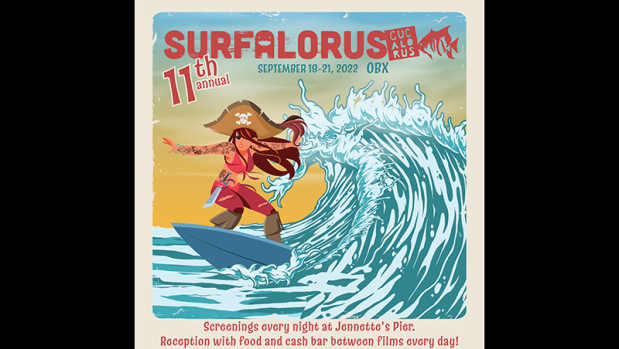 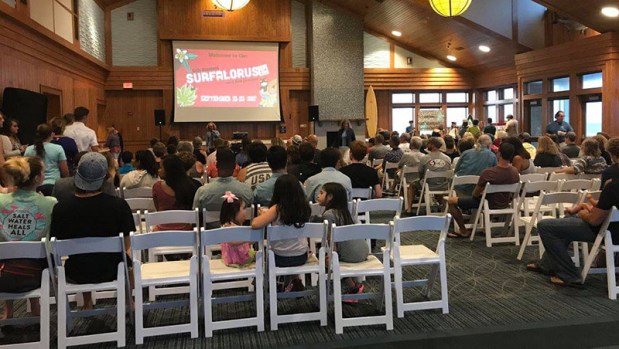 A film screening at Jennette's Pier from a past Surfalorus Film Festival. Courtesy Dare Arts

“The film tells the amazing story of Jesse’s life, with plenty of East Coast shredding,” said filmmaker Mike Leech. “I’m looking forward to seeing everyone at the screening of HINES on the first night of Surfalorus.”

The festival kicks off this Sunday at 5 p.m. at Outer Surf in Nags Head with a special free screening of HINES and then the party moves over to Swells’a Brewing at 7 p.m. for a book release for North of Nowhere: The Surf Photography of Mike Nelson. Matt Pruett and Mike Nelson will be on hand to talk about the book and sign copies for Surfalorus guests.

“Legendary New York photographer Mike Nelson is currently en route to the Outer Banks for our North of Nowhere Book Release Party at Swells’a Brewing,” says author Matt Pruett. “Nellie hasn’t been to the OBX in 15 years. Because frankly, the waves are way better up his way. And this book proves it.”

Shorts Block One screens on Monday September 19, following a special celebration of the life of ESA co-founder Cecil Lear beginning at 6:30 p.m. The shorts block brings together films from Turkey to Brazil and from Wrightsville Beach to Scotland with a few stops at unknown locations in between.

The whimsical feature, Sweet Adventure, screens on Tuesday, September 20 at Jennette’s Pier. This film is wonderfully narrated by action sports legend Salema Masekela and features a handful of cameos from surf culture legends as well as slick photography, perfectly curated music and well-constructed edits. There will be a Q&A with the filmmakers after the screening.

Shorts Block Two has the same wild reach and screens at Jennette’s Pier on Wednesday at 4pm followed by the closing night film For The Dream. Special guest Ben Gravy will be at the closing night of Surfalorus to discuss how he reimagined the role of the surfing profession and carved out his own niche in the wave riding world.

Tickets are on sale at Surfalorus.com for all of the screenings. An all-access pass can be purchased for $25.

Dare Arts is a 501(c)(3) nonprofit arts organization dedicated to encouraging the arts in Dare County through advocacy, enrichment and opportunity.