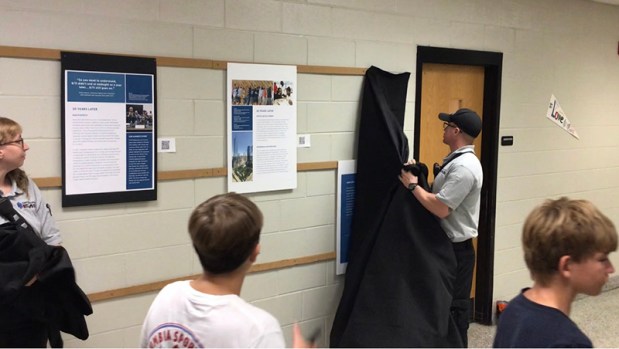 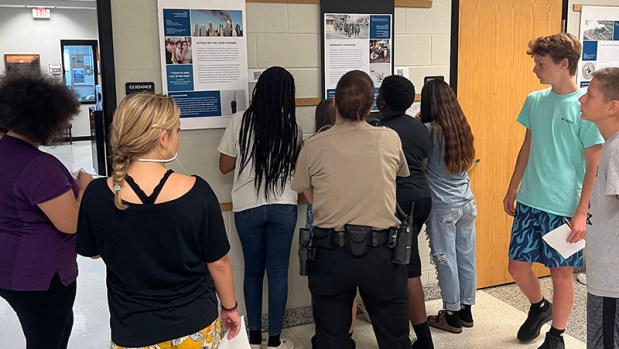 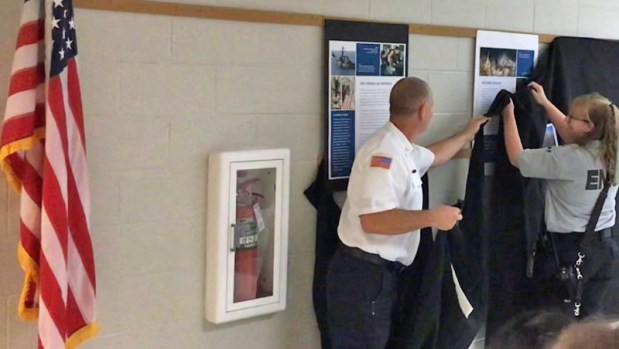 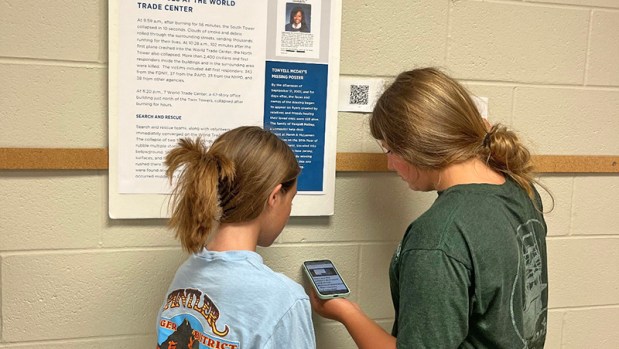 Manteo Middle School has announced its participation in September 11, 2001: The Day That Changed the World, a downloadable educational exhibit that presents the history of 9/11, its origins and its ongoing implications through the personal stories of those who witnessed and survived the attacks.

This learning experience was made possible through a collaboration between Manteo Middle School’s Carrie Houseknecht, school librarian; Kelsey Oglesby, CDC coordinator; and Kimberly Dickson, technology facilitator. The display was hung in the main hallway with an added touch of QR codes that, if scanned, would read aloud the poster to the student. The exhibition was unveiled September 12 with a little help from local first responders Mac Gray (RIVFD), Schae Britt (EMS), Seth Michelini(EMS) and School Resource Officer Deputy Grover. Each of the community members introduced themselves and shared with the students what they were doing when they heard about the attack on the Twin Towers. After the exhibit was unveiled, students walked through the exhibit gathering facts about the events of 9/11, the emergency response and where we are over 20 years later.

Students then returned to the library to listen to first-hand accounts from people who were inside the towers as they were hit, provided through a webinar from the 9/11 Memorial and Museum. Wrapping up what they learned, students were asked to write on a sticky note what stuck with them today about everything they learned about 9/11. Raegan Sherrod responded, “One thing that stuck with me is everyone’s dedication to helping each other even if it meant risking their lives.” Solomon Cooper wrote, “I believe that people forget these people who died, but there are some who don’t have families to go home to.” Another student, Kealey Archbell was stuck with the idea, “I can’t imagine how scared some people were for their families, and that there were so many innocent lives taken.”

Students were challenged as they left class to ask their parents where they were on September 11, 2001. Sixth-grade students toured the exhibit on Monday and the museum will be on display at Manteo Middle School for three weeks.

“I was inspired to share what happened on 9/11 with the students at Manteo Middle after thinking about the fact that most students weren’t born at the time of the attack,” said Houskencht. “I wondered if they felt like I did about WWII and the fact that it happened so long ago. As the speakers said in the 9/11 presentation it is important to keep these stories alive.” 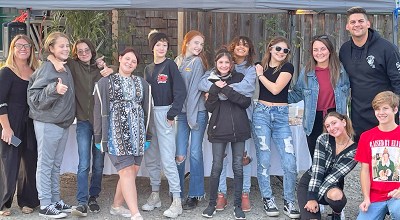