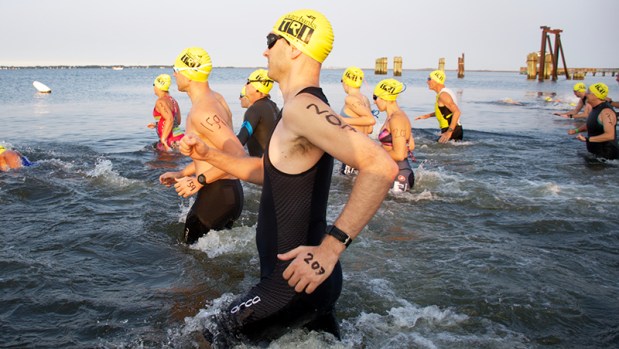 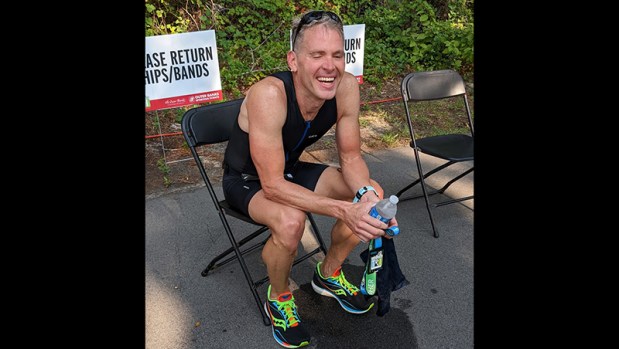 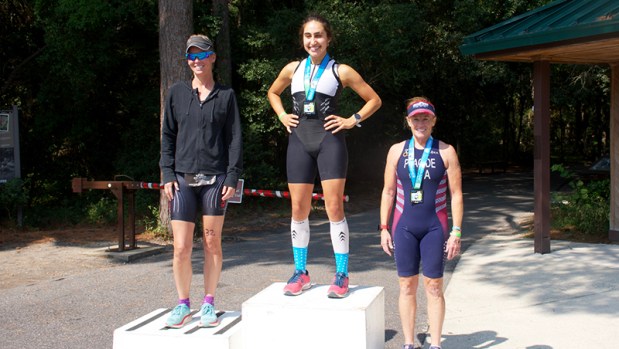 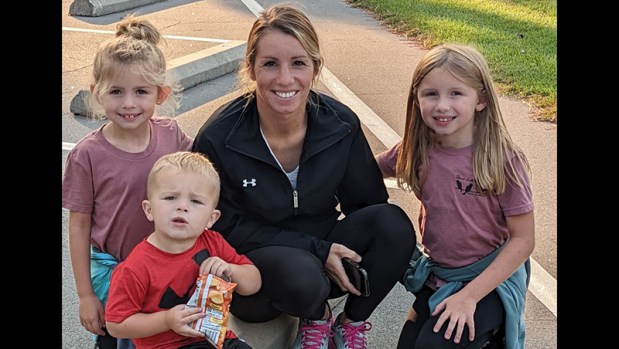 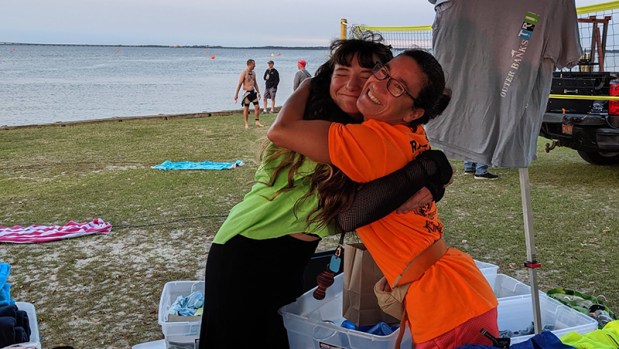 Volunteers selling t-shirts before the start of the OBX Triathlon. Kathy Sparrow photo 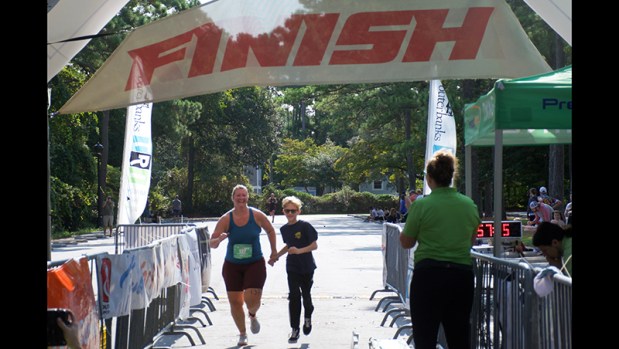 A mom and son run through the finish line at the OBX Triathlon. Kip Tabb photo 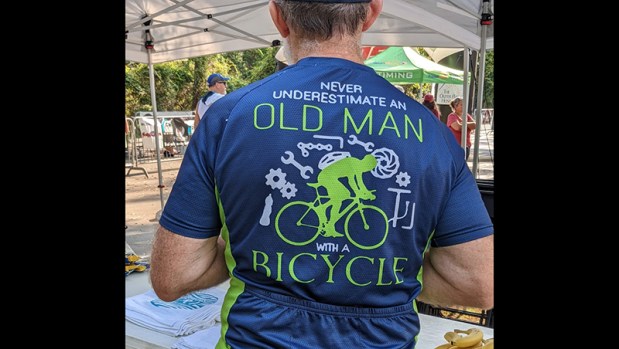 This man came back from a stroke to compete in the OBX Triathlon. Kathy Sparrow photo

More than 240 athletes participated in the 2022 OBX Triathlon on Saturday, September 17, put on by Outer Banks Sporting Events (OBSE) and sponsored by the Outer Banks Visitors Bureau. The race, which included swimming, biking and running starting at the Ole Swimming Hole behind the NC Aquarium on the north end of Roanoke Island. Two groups participated with a Sprint division and an Olympic division and all the participating athletes – from an 8-year-old who did the bike leg of a three-person team to a 76-year-old who powered through all three; from as far away as Utah, Oklahoma and St. Louis – were super charged after completing the course. The finish line was at Ft. Raleigh Historic Site with food and a traditional beer garden for racers (over 21).

Oreste Pesselato (Rusty), from St. Louis, Missouri, who won the Olympic division with a time of 2:11:08, had never been in a triathlon before. But friends on the OBX convinced him to come here, visit them and compete. He drove the whole distance (“a bike wouldn’t fit on a plane” he stated) and had trained for a full six months prior to the event, “although nothing could have prepared me for the wind on the (Old Manns Harbor) bridge.” Rusty also said after the race that “the entire event was set up very well and a great course. The volunteers were incredibly helpful all along the way.” Olympic competitors swim .93 miles; bike 25 miles (to the end of Mashoes Road and back) and run 6.2 miles. The Sprint division are all shorter distances.

Katie Soeder, from Virginia Beach, was the first female and the third overall in the Sprint division to cross the finish line. She had borrowed her mom’s bike and couldn’t get the kickstand to stay up and in, said she hadn’t been in the water competitively or at all for seven years, but “knew how to run!” Coming in first in the Sprint was Adam Burke from Raleigh with a time of 1:13:08. He couldn’t thank the volunteers enough.

The event was the culmination of months of planning, checking distances for certification by USATF, getting permits, getting equipment, sponsors, making sure neighbors on streets that were part of the race knew about the event, closing the Old Manns Harbor Bridge down from 7 a.m. to noon, massive organization of details and amassing a pool of awesome, local volunteers who didn’t mind showing up – some as early as 5 a.m. – to stay for some till past noon. Then break down the course and thank the National Park Service for the use of their space and facilities.

This is the first triathlon since the pandemic, so the organization, OBSE, was happy to put together a successful event to build on for next year. In 2023, the event moves to June 2-3 to avoid being in the middle of hurricane season, which in September is always an issue. The last time the event was held, it had to be condensed to a biathlon because of poor water quality in the Croatan Sound.

The next event on the OBSE calendar is the TowneBank OBX Marathon, Half Marathon, 8K, 5K, and Family Fun Run sponsored by TowneBank, the Outer Banks Visitors Bureau, Publix, Surf Pediatrics and so many more generous sponsors, both nationally and on the Outer Banks. Mark your calendars for November 11-13, 2022, Veterans Day weekend for these events. For more information about OBSE or the upcoming races in November, go to www.obxse.com or follow OBSE on Facebook or Instagram for information and results.

Results for this race included: 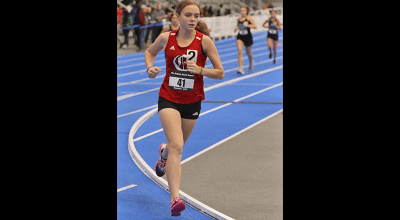