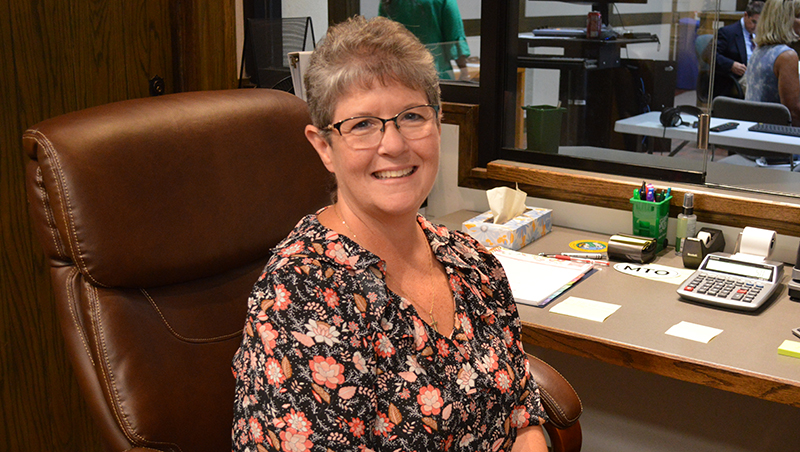 Valerie Wright was introduced to the Town of Manteo Board of Commissioners on Sept. 21, 2022 as a new employee in the town’s finance department. M.H. Goodloe-Murphy photo

Manteo commissioners are wrestling with speed limits within the incorporated town.

Town manager Melissa Dickerson drafted a letter to NCDOT requesting the agency conduct a study and asking for a townwide speed limit of 25 miles per hour.

Commissioner Darrell Collins agreed with the police chief. If the speed limit is 25, drivers will go 30 miles per hour, argued Collins.

The letter was forwarded to NCDOT requesting 20 miles per hour.

– Golf Carts. Dickerson explained that the town wanted to be ready if the commissioners moved to permit golf carts. Town attorney Ben Gallop is working on a draft permit ordinance.

– Lift Station. Dickerson said “we have some items to work through.” A storm water pipe is compromised. The pipe needs to be replaced before the new parking lot is paved.

– Sanderling Commons is the name for the affordable housing units to be built by Woda-Cooper off Bowsertown Road. Woda-Cooper representatives approached the town expressing an interest in annexation. The firm has a preliminary site plan showing 46 units, which is “considerably different” from the first request by Dare County, said Dickerson.

On Sept. 21, 2022, town department heads reported to the commissioners:

Woody also announced the creation of an information technology help desk. In August, 17 tickets were created and 16 of those tickets have been resolved.

For the Kids Fishing Tournament, 62 youngsters participated with locals and visitors from Virginia, Pennsylvania and Germany.

At the town marina, 21 transient boats visited the marina during August. Revenue totaled $4,000. Ten boats canceled due to weather or schedule changes.

The department launched 20 investigations, 12 of which were closed by arrest.

– Planning. In August, the town’s Planning and Zoning Board reviewed Dare County Youth Center renderings and a text amendment to permit youth centers. Planner Matt Farmer is working with management to get an updated light plan for Marshes Light.

– Public Works. Director Frankie Woodley received his advanced Certificate of Public Management after completing 90 hours at the University of Georgia Carl Vinson Institute of Government Michael T. Joyner education program along with American Public Works Association. The department staffers helped with National Night Out, painted No Parking curbs in downtown, assisted with the farmers market held at College of The Albemarle and started edging sidewalks along Highway 64.

– Water and Sewer Department. Staffers repaired a water main break at Manteo Elementary School caused by an underground utility bore. A sewer main break at the intersection of Wingina and Barlow was also caused by an underground utility bore. Department director Josh O’Brien said the contractor reported the damage through 811 notifications. As a result, a sanitary sewer overflow did not occur. In both the water and sewer systems, the staff responded to 138 service location requests in August.

– Community and Economic Development Department. The Main Street Advisory Board met for the first time in August. A project with graduate students from the UNC School of Government will show how private investment helps spur downtown revitalization.

The next merchant mingle is set for Monday, Oct.10 at 5:30 at NouVines.

Program director Michele Bunce is working with the National Park Service regarding the visit to Fort Raleigh of the U.S. Capitol Christmas Tree, planned for Nov. 13 from 3 to 5 p.m.

The commissioners approved transfer of $18,157 in unauthorized substances tax collection and judicial forfeitures from North Carolina to the police department for use by special investigations.