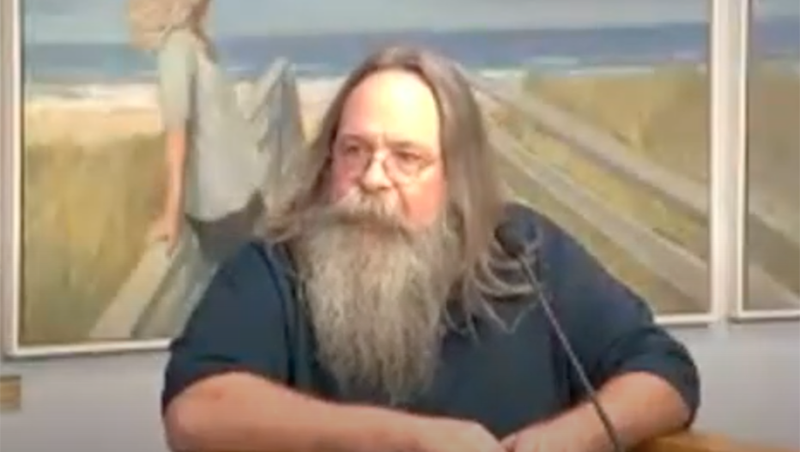 Dave Carroll, a member of the Northeastern Workforce Development Board, encouraged commissioners to find a solution to the housing crisis at the November 2 Nags Head commissioners meeting. Nags Head meeting video still

The Woda Cooper housing project continued to be a hot topic of conversation at the November 2 Nags Head commissioners meeting.

Though town officials implemented a temporary moratorium on building in the general commercial district starting October 19 so they could take time to conduct a detailed review of the town’s zoning map and its consistency with the town’s comprehensive land use plan, community members and other interested parties are taking this time to make their positions known to commissioners.

Blackburne outlined the plan for Sanderling Commons. It will consist of three buildings, both two and three stories—10 one-bedroom 676 square foot units; 38 two-bedroom 900 square foot units; and 6 three-bedroom 1112 square foot units. There will be 111 parking spaces and outdoor amenities. The development cost per unit is approximately $240,000.

Blackburne described the housing for community members such as teachers and school support staff, hospital staff, starting police officers and firefighters, local government employees, and people serving in retail and hospitality, as well as for senior citizens on fixed incomes.

Though the housing project is not Section 8 or public housing, rent is determined by income. The target renter makes between 60 and 80% or less than the adjusted median income (AMI) in Dare County. For example, at 80% AMI, a family of four must have an income less than $63,120 or less to qualify. A single person must make less than $44,240.

Town commissioners, however, took issue with the income requirements, claiming that much of the workforce and essential workers in Nags Head won’t qualify under the current income requirements. Of 120 town employees, it was reported that only nine would qualify at the 80% AMI income standard and none would qualify at 60%. These numbers are based on a one-person household.

Even for couples or families with children, Mayor Pro-Tem Mike Siers claimed the numbers still didn’t work for most people. “It’s very difficult on this beach for a family of four to have one person work,” he said.

For Duke Garrity, government affairs director for the Outer Banks Home Builders Association, professional singles or double income families are not the only part of the workforce that need housing: “We have to find a place for a single mother to raise her children. Someplace that’s clean and safe and we don’t have that.”

Some, however, disagreed. “If you want to live in paradise then you have to pay for it,” said one neighbor during public comment. Others mentioned the additional strain on the sewage, stormwater and traffic, and the effect that a housing development would have in the historic character area of Nags Head.

Dave Carroll, a member of the Northeastern Workforce Development Board, agreed that while it is true that many members of the professional workforce including teachers and police officers may be excluded by income, “we have to understand that much of the workforce specifically for this community is in the service sector. Service sector people are the people who make it possible for homeowners to be able to rent out those homes for vacations,” he said.

He specifically mentioned people who clean rental houses and those in the hotel, restaurant and retail industries, who often are paid less than $15 per hour who cannot afford to live on the Outer Banks even with roommates.

“I don’t know the ideal location, maybe there isn’t a place in Nags Head, but we do need to move forward on trying to find affordable housing for the other workforce the people who cannot afford to live anywhere in the county nor can they afford to continue to drive,” he added.

Real estate broker Bobby Harrell said that finding a property that checks all the boxes is “almost impossible” after looking for many years.